As more of our lives comes to be lived online, the worst we encounter or evade in ‘real’ life reappears digitally magnified with a vengeance­ 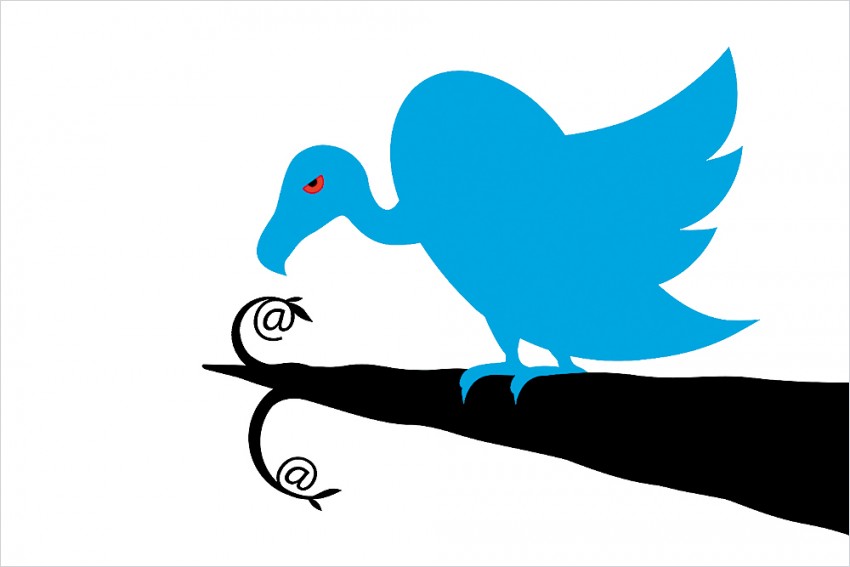 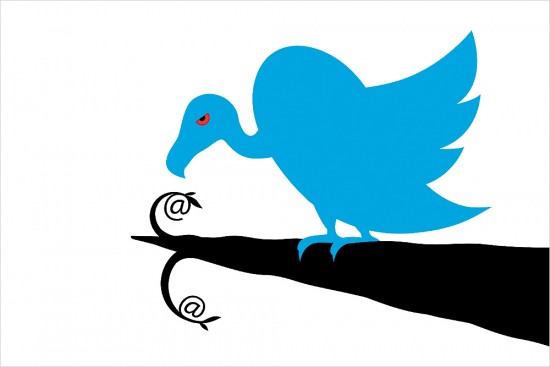 Manim (name changed) logs onto his Facebook account every mor­ning at an internet cafe after spending the night answering calls at the call centre he works in. Only last week, Manim, 30, sent a barrage of abusive messages to actress Kalki Koechlin, asking her to not show off her body so much and behave like an ‘Indian woman’. We caught up with him at his internet cafe and asked why he did it. “She should stay within her boundary,” he says. Does he really believe Kalki is likely to take his taunt seriously? “Yes, they should be affected by my comments. I want her to feel insulted and stop showing off. I keep telling my friends too to send her such messages and make her realise what she is doing is disgusting,” he says.

There are also those who turn trolling into a job. The International Chalu Union, a troll group based out of Kerala and headed by Roshan Thomas, makes memes in Mala­yalam, mostly on political issues. They troll politicians, film stars, TV anchors, just about any celebrity, with their vitriolic missives. And a few, especially out-of-work journalists, have virtually turned cele­brities of sorts  as trolls.

A vengeful troll operates from a distorted sense of importance. Take Jesse Shand, from Michigan, a recluse who weighed over 300 kg and was homebound. Shand trolled bodybuilders online for years, often sending them mean messages. He claimed trolling was a way of projecting his unhappiness onto others.

The other day, during Holi, a Bollywood celebrity tweeted a picture of her hugging a male friend, probably expecting responses matching the mood and occasion. Naive expectation, as it turned out—for, a kind of targeted public sadism rules the waves these days. Sure enough, someone promp­tly came in and commented below, “It’s because of people like you that women are becoming ashlil”, blissfully unaware of course that the charge of obscenity sticks quite well to his kind—a whole species of foulmouths. Another celebrity posted a picture of herself in a sari and was similarly greeted with a barrage of hate tweets.

There’s no escaping it. Being on social media is like stepping out in Delhi’s toxic winter smog—even if you’re trying to find good cheer, a vile murk defines the ambient mood. Trolls are everywhere, like suspen­ded particulate matter. You could post a picture of a lunch or of an outing with friends. Share an article on the party in power or an innocuous paper showing that coffee isn’t good for digestion. If you are visible or vocal on ­social media, you are fair game for these gremlins, and a special menu of malice, rage and harassment is reserved for you.

The original perpetrator of it all is an elusive figure, often hidden behind a veil of anonymity. This is the classic feature that makes up the subsoil of social media: the stereotype is of a disaggregated army of loners, social misfits, malcontents, sitting in front of a white screen and venting all their frustration at the world. Anonymity offers immunity from consequences that would ensue in the real world, so the baser instincts get full play. Misogyny, racism and everything else from the usual roster of biases get married to a vicious verbal strafing. Social media is where losers in the real world get to win.

But from this, the category has expan­ded and evolved with the medium. Once the norms of rhetorical violence were set, it started getting applied in debates on political and social themes. Trolling started getting organised. Although weird handles still abound, anonym­ity is no longer a prerequisite. Like everyone in a noisy TV debate ends up shouting, many ‘overground’ voices, indeed mainstream figures, have now adopted the carpet-bombing style of trolls. The whole discourse is now shaped by extreme position-taking.

That’s why, if you ask different people what they think of trolls, you won’t get the same answer. They span the whole gamut. For some, they’re still largely simple deviants, trying to derail a conversation and elicit a few nasty laughs (at someone’s expense). For others, they can be harassers at an individual level, targeting specific personalities, whoever their pet peeve is. For many, this harassment can have a larger purpose—for example, to shut down an idea simply because it’s different from theirs.

In Chinese, trolling is referred to as bái mù (literally: “white eye”) or eyes without pupils—the pupil of the eye is used for vision, the white section cannot see. And trolling involves being blind in a certain way, talking bilge with no regard to others’ sensitivities or the nuance of the situation at hand. But why do trolls behave the way they do, why do they choose to greet perfect strangers with abuse? Funnily enough, it had a relatively innocuous beginning.

In the 1990s, when the internet was accessible to just a few people, the aim of trolls was to overtake a discussion just for kicks. The earliest example of a troll, according to Prof Norman Johnson of the University of Houston, was that of Net.Weenies who insulted people just “for the heck of it”. “These are the kind of people who enjoy insulting others, the kind of people who post nasty messages in a sewing newsgroup,” writes Johnson in a research paper. No surprise then that, around the same time, American author Mike Goodwin promulgated the Goodwin Law: “As an online discussion grows longer, the probability of a comparison involving Hitler approaches 1”. This means, if an online discussion (regardless of topic or scope) goes on long enough, sooner or later someone will compare someone or something to Adolf Hitler! Abuse is always waiting to be born. However, the troll as ‘nuisance-creator’ or ‘provoker of all-­and-sundry’ is an image that finds little standing in the 21st century, seen as a euphemistic creation of the trolling community itself. ‘Trolling’ has diversified and infiltrated the whole pond. Its harsh end has become synonymous with anything bad that happens on the Internet. And it’s gone way beyond simply annoying individuals or intentionally taking a debate off-topic.

Most experts agree that while trolls might have started off as architects of all nuisances, little deviants with pointy ears, they have evolved. Now, anonymous or otherwise, they are associated with a kind of collective violence, a symbolic assassination of the rights and ideas of others. Trolls almost always come with the intention of lynching an idea opposed to theirs.

It’s a lonely life. Manim spends about four to five hours on Twitter and Facebook every day, scouring for celebrities and others to troll, but has barely ever received a reply to his comments. Yet, he is sure every word he writes is read by the people it was meant for. He also admits to deriving a sense of pleasure in imagining people cringe when they read him.

So are we dealing with psychos who derive pleasure from abuse? Or, frighteningly, can it be anyone ‘normal’? What traits do trolls share? A 2017 research paper published by Stanford and Cornell University tried to find out. “We wanted to under­stand why trolling is so prevalent today. While it’s common knowledge that trolls are particularly sociopathic individuals who occasionally appear in conversations, is it really just these people who are trolling others?” says Justin Cheng, a computer science researcher at Stanford and lead author of the paper.

For the research, all participants were instructed to read onl­ine material, say a magazine story, and then the comments following it. They were then asked to themselves comment on the website, to ascertain how mood and context affects how people write in comment sections. Funnily, about 35 per cent responded to neutral posts, containing nothing provocative, with troll comments! And that percentage jumped to 50 per cent if the subject saw trolling comments. The res­ults, say the researchers, indicate that trolling behaviour can be somewhat of a chain reaction. Trolling begets trolling. Mob mentality on the int­ernet can get extremely strong as people find others echoing their thoughts. The anonymity, the abandoning of one’s own identity markers, then both helps drive the collective identity and allows its most ­extreme expressions.

And what about those who give it back as good as they get? Can they be called trolls as well? Rubeena Shamshudeen, a PhD scholar from Kerala in a European Uni­versity, is vocal on social media about issues related to women’s rights and politics and is often at the receiving end of trolls. “I usually try keeping the conversation civil and if I do disagree with someone’s analysis, I try countering it with facts,” she says, adding that she keeps her interactions limited to those she knows directly or through association. “I do give it back though. If someone ­att­acks me personally, I will respond with a quip or a joke,” she says.

And what about the victims, those at the receiving end? The online venom is not only directed at celebs, but also at ordinary people with a point of view.  One of the times that Taruni Kumar, a Bangalore-based journalist, got trolled for the first time after she did a video about Prime Minister Modi completing three years in power. “It was a run-of-the-mill story on how the PM needs to strengthen India’s Pakistan policy. Yet, as soon as it was out, I star­ted getting comments...not just on the contents of the video, but about how I look and my talking style,” she says. Many comments referred to her as a “fat cow”, others called her a sexually promiscuous woman simply because they disagreed with her opinion.

Such anger constantly hanging in the air brings on the risk that things can move out of the internet’s echo chamber and pose a real threat to life and property. In Taruni’s case,  these trolls remained online but her colleague wasn't as lucky. Many who commented on her stories ended up calling her office or her mobile number to send threatening messages. Some of the cow-related lynchings in the north seem almost an extension of the verbal violence that flies around online.

What started with a troll questioning the anti-Left views of Chitralekha, a Kerala-based Dalit female auto driver, spiralled into threats and slurs.

The recent attacks on Chitralekha, a Kerala-based Dalit and female autorickshaw driver in India, offered a variation on this. It started with a troll questioning her vocal anti-Left political ideology and quickly spiralled out of control with threats to her life, caste slurs and sexually explicit comments. “The comments were so extreme that just reading them made you wilt. There was no need for the threats to be carried out. The words were themselves tantamount to rape. It was online gang-rape,” says a journalist.

If the victim is not thick-skinned, trolling can leave disturbing traces and cause low self-est­eem. “Sometimes trolls make you question yourself and go into a spiral of ‘was I really wrong’,” says Taruni.

Legal redressals are a bit patchy. Laws around cyber stalking were introduced in 2000, but barely any arrests have been made under them. The police are typically unwilling to act on complaints—for them, trolls are an abstract problem not worth the effort. But with our lives increasingly conducted online, and with even political parties and corporates having figured out uses for trolls, the smog is only likely to worsen.