The View From The Other Boat

A group of artists, filmmakers and technologists from Mumbai works together with a group of sailors from the Gulf of Kutch to produce a feature-length experimental film 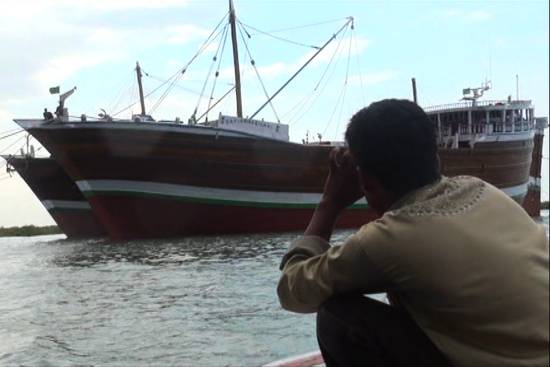 The feature-length experimental film Kutchi Vahan Pani Wala (also known by its title in English: From Gulf to Gulf to Gulf) is the result of four years of dialogue, friendship and exchange between us and a group of sailors from the Gulf of Kutch. These sailors are descended from seafaring communities hundreds of years old. The big difference these days is that these communities not only build, but own and operate their boats. They would call the western Indian Ocean from Zanzibar to Kuwait their home. Their journeys and those of their burgeoning vessels show us a “country of the sea”, beyond the boundaries and imagination of most of mainland India.

But a more direct inspiration for this film was a recent travelling media form. While working on a book project on the contemporary vitality of what is known regionally as the “dhow trade” in 2009, we came across many ephemeral and powerful videos being made by sailors and dockworkers in the region on their cellphone cameras.

2008-2009 was the time of “music phones”. Sailors passing through Dubai, Sharjah, Muscat or Salalah could acquire phones that recorded videos and also held a lot of music, such as the Nokia ExpressMusic. They could exchange older phones for camera phones and copy music at ports all around the region. At sea, there is a lot of time for listening, contemplation, and experimentation. The results of cameras and music collections now travelling over thousands of journeys and hundreds of ships were remarkable. Among other genres, we found “music videos” in regional languages such as Kutchi, Farsi, Balochi or Saraiki. Historians and scholars following our work around the Indian Ocean were rather awestruck. These kinds of images have only been produced rarely in the past by photography-minded explorers such as Alan Villiers in the past century. These records of encounters and longing travelled from person to person, and boat to boat; most often over bluetooth in face to face meetings. They rarely ended up on the Internet. They were often deleted from phones before an occasion for sharing, to be lost forever.

A typical music-video (sub-genres include landscape-ovation, personal-annotation, fire-dirge, love-song, fiction-drama, etc) made is as follows: a video is shot at sea or in a port. If it is of another moving boat, the filming-party’s boat is often moving alongside as well. If it is shot among the crew, it usually involves play-acting. If it is at ports, it is usually with a different sense of humour than at sea. These pieces are edited in camera, and then carefully striped (audio-added) with a selected song or two from one's phone. The song is thus transformed, and the image is too. Sometimes the original audio is also present in the background, and you can hear voices in Arabic, Iranian, Somali or Hindi. The results embody a phrase used by the historian Engseng Ho, who has written powerfully about diasporas as distributed anti-imperial forces: If colonialism was “the view from the boat” in India and Africa, this is as Ho puts it in the title of a well-known post 9-11 text, “The View from the Other Boat”. In a funny mirror of this condition, many accounts in film journals or festival blurbs about our film say that we had given these sailors cellphone cameras to shoot. But, they have their own! Their creativity often preceded ours, and continues without us.

The film we made together (two seafaring Kutchis: Sidik Sanghar and Junas Bhagad are co-presenters) treats many different kinds of footage of the seas and ports, those shot by us and by sailors, equally. Thus high-resolution steady-shot filming cuts against the most low-resolution of cameraphone imagery from 2005. Often, the cameraphone images are compelling. This is not because we must fetishise its low quality, its “reality-effect” etc but instead because these are carefully crafted rejoinders (consciously or not) to what we are consuming as images. These videos express that the world is big and the screen is small. They inhabit music and its “piracy” on the one hand and the always promised “democracy” of cinema, with the other finger. They also resist the more sordid, darker consequences of “everyone has a camera now so let’s spy on each other” brand of sting-operation reality-TV through a special combination of performativity and charm.

CAMP Are a group of artists, filmmakers and technologists who work together out of Mumbai. Their award-winning film From Gulf to Gulf to Gulf has been shown worldwide in the past year at venues including the Viennale, the London Film Festival, MoMA, and an open-air screen on the wharfage in Sharjah. It will have a public museum run in Mumbai coming February)

This web exclusive piece does not appear in print