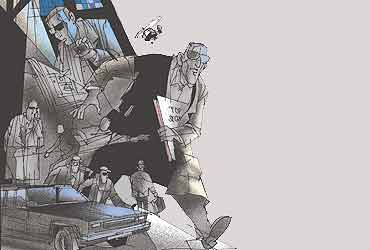 outlookindia.com
-0001-11-30T00:00:00+0553
The wheel has come full circle at the Research and Analysis Wing (RAW). Already reeling under the impact of the Rabinder Singh episode—the senior RAW officer is suspected to have defected to the US—there may be more skeletons tumbling out now at India's premier spy agency. For the first time, the firm has admitted that eight of its key operatives have gone missing—almost all while on critical assignments outside the country— since the agency's creation in the late '60s. Rabinder is the ninth such known man on the defectors' list (accessed by Outlook).

The file with the names is now on the desk of Prime Minister Manmohan Singh. Most of the cases go back a few decades but some names are likely to cause deep embarrassment in the spy community. Most of these operatives disappeared while on posting, relocating themselves to countries in North America and West Europe under assumed names and false passports. A number of them, it now turns out, were well-guarded 'assets' in the hands of foreign agencies, a euphemism for double agents, and are now green card holders in the United States or UK citizens.

Now with the Rabinder Singh episode opening up a can of worms, RAW has been forced into damage control mode. Last fortnight, the PM ordered the file detailing the missing ex-RAW sleuths to be put up before him. Incidentally, that's when intelligence officials sought to make a differentiation between those who had settled down in the US or UK after retirement—and coincidentally there are scores of them—and those who disappeared without a trace with important confidential documents and information. The list of nine belongs to the latter category.

Prominent among the names is Sikandar Lal Malik, personal assistant of RAW founder and superspy, Ramnath Kao. Malik, say RAW sources, was privy to the top-secret decisions taken by Kao during the tumultuous early '70s, including the plan to "liberate" Bangladesh. On a US posting, Malik disappeared one fine morning and is presumed to be living somewhere in that country now. His defection was a closely guarded secret for many years and is only now being acknowledged as a 'blow' to the agency's reputation.

According to sources, it took the agency several years to assess the damage caused: Malik had crucial information because most of Kao's highly secret correspondence was handled by him. For foreign agencies, which otherwise had little access to Kao, the 'winning over' of Malik was a coup. This, because with Malik went a treasure trove of classified information, which may not have been known to anyone other than Kao himself and his boss, the then prime minister, Indira Gandhi.


Even through all this, it took the latest Rabinder Singh episode to shake the RAW out of its reverie. Some form of a backlash has already started with all telephone numbers inside RAW headquarters changed without notice (for the first time in many years) and certain officials coming under the microscope.

Senior intelligence officials, however, still play down the numbers. Says K.N. Daruwala, a former senior intelligence officer: "The RAW has been in place since 1968, and 7-8 defections in this long period is not too bad. And I doubt very much if the quality of information they passed on would have been too useful to user countries." All the same, there is a view in security circles that the time has come for stocktaking to 'weed' out potential turncoats.

But it's easier said than done. Security analysts say in the absence of parliamentary scrutiny, there's virtually no accountability in the RAW which has seen better days in the '70s and early '80s. But now with the upa regime clamouring for a probe, suddenly there is need for action. The PM is being briefed on the changes by national security advisor J.N. Dixit, who's keen to 'revamp' RAW and other intelligence agencies.

Top pmo sources say Dixit is concerned with the practice of RAW officials misusing the blanket authorisation to make contacts with foreign agencies. "Increasingly, there's been mindless and indiscriminate liaisoning conducted under various covers (lately under the cover of fighting terror) and without any monitoring. As per rules, any official making 'contact' with a foreign agent has to immediately put it down on paper for his seniors," says a RAW officer. Over the years, this clause has often been ignored, with deadly consequences.

As a case in point, they point to Rabinder Singh's government-funded visit to the US in 2002. He had no reason to travel there since the course was an exercise in countering hijackers. Not once was Singh asked what he, as an official on the Southeast Asian desk, was doing at an anti-hijacking and hostage-taking programme "because there is little history of such activities in the region assigned to him", says an official. And this has been a growing trend in RAW, jostling for postings in North America and West Europe despite the regions not directly impacting India's security concerns.

In a confidential note to the government, Rajya Sabha MP Rajeev Shukla brought out this anamoly. "There are numerous officers posted in the US, Netherlands, Germany, Japan and other western European countries, whereas in security-sensitive countries like Pakistan, Bangladesh, Sri Lanka and uae, even the sanctioned strength is not being met." Shukla says it is easy to understand why our RAW officials have overstaffed embassies in West Europe and North America. "All the good ambience, good life, good education for children—at taxpayers' expense. This process must be reversed," he says. Question is, how?

pmo officials say an operation RAW clean-up has been launched. Dixit has already had two rounds of meeting with current RAW chief C.D. Sahay and other top officials there. In a sense, all this could not have come at a more opportune time. It has raised issues already being discussed quietly in the reclusive intelligence community. Now that it's out of the closet, just how far is this upa government willing to go? Can it enforce a new, rigorous agenda in an organisation where everyone seems to be his own boss? And will it spur more names on to this list of nine?

'The PM Is A Conciliator'