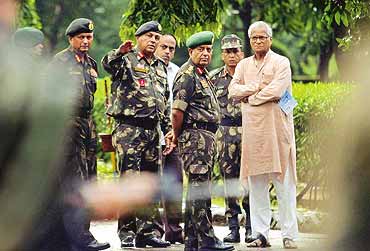 outlookindia.com
-0001-11-30T00:00:00+0553
Though defence minister George Fernandes and the army top brass deny that there was a security lapse, officers at the 16 Corps and army headquarters do concede in private that the fidayeen strike on July 22 at the Tanda camp in Akhnoor near Jammu was a serious breach of security. "Let's face it," says a senior officer at the army headquarters of the strike which left one brigadier and seven soldiers dead, "a senior officer of the rank of a brigadier being killed has never happened in all these years of militancy. This is serious cause for concern." The army has ordered an internal enquiry into the incident.

The first strike—at about 5 am—was terrible enough. Seven soldiers were killed and 14 others injured before two members of the three-man suicide squad were gunned down. But no one had reckoned that a third militant was hiding in the bushes. So when a message saying that the militants had been "neutralised" was flashed, the entire top brass of the army in the Jammu region, including the Northern Army commander, Corps Commander of the 16th Corps, two major-generals and a brigadier, reached the camp some six hours after the first strike.

The officers were being briefed on this very incident when the third militant struck. As he blew himself up, brigadier V.K. Govil was killed. And Northern Army Commander Lt Gen Hari Prasad and the GoC 16 Corps Lt Gen T.P. S. Brar, Maj Gen K.K. Khanna and Maj Gen T.K. Sapru were lucky to escape with minor injuries.

A group calling itself the Al-Shuhda has claimed responsibility for the attack. But Indian intelligence agencies claim that it is the same old Lashkar-e-Toiba in a new garb. According to a top intelligence source, the militant group sends out fidayeen squads under different names to conceal its identity. "No one's heard of Al-Shuhda. It is quite clear that it is the Lashkar in yet another avatar," he says.

Army officers say things could have been worse. The third fidayeen had an AK-47 which he could not use as he was badly wounded in the first strike. He had bled so profusely that he was unable to even pick up his rifle that was recovered from the bushes. Had he been able to use it, the lives of the entire top brass of the northern command would have been in jeopardy. That would have been a major psychological blow to the army.

But the embarrassed army and defence ministry are unwilling to admit their guard was lowered when the militants struck. "The alert guards took on the fidayeen at the very gates of the camp," a senior army officer pointed out to the media. "This proves there was no security lapse on our part."

Whatever their public stance, within the 16 Corps itself introspection has begun on the gaping holes in the security set-up that led to the attack. Some of the questions being raised are:


These queries will form part of the larger enquiry the army has ordered. But the July 22 incident has also challenged the wisdom of senior army and police officers rushing to the spot where a fidayeen attack has taken place. Says an intelligence official : "There have been several instances when police and army officials have put their lives to great risk for no valid reason. Two years ago, a dgp found himself trapped inside the state assembly while a suicide attack was on.There have been several other cases. Luckily no one's been killed." Northern Army Commander Lt Gen Hari Prasad reasons, "We lead the forces from the front, be it a section commander or an army commander."

But he does fear that there could be more suicide strikes against the army as it has been mounting pressure on militants. One day prior to the Tanda attack, militants had struck at a pilgrim langar in Katra near the Vaishno Devi Shrine. A grenade attack, while the pilgrims were queuing up for their meals, left five dead and 14 injured. Militant strikes have also been stepped up in the Jammu sector. Army intelligence reports large-scale infiltration through Akhnoor—the BSF killed five intruders three days after the Tanda incident. With India and Pakistan having announced a peace initiative, it is but natural for these militants to step up their anarchic activities.

For, even as Jammu and Kashmir witnesses a tourist boom after more than a decade—when its markets and tourist spots bustle with life—it would take just one grenade attack at a busy marketplace, one deadly strike against an army camp, one landmine explosion on the highway to put paid to the tenuous sense of calm. The Mufti Mohammed Sayeed government cannot afford to let that happen. And this, he is the first to admit, means stepping up the vigil and plugging any gaps in the security apparatus.