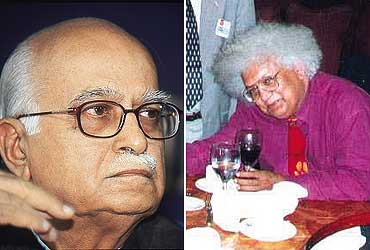 outlookindia.com
-0001-11-30T00:00:00+05:53
It isn’t clear why home minister L.K. Advani planned to visit Britain, and why it was cancelled. But, clearly, several organisations were planning protests against the visit. The home ministry is believed to have been advised that his trip here would provoke a hostile reaction—diplomatically, in Parliament, and among Gujarati Muslims. A group of 30 academics and human rights activists led by Lord Meghnad Desai, of the London School of Economics, wrote a letter to The Guardian saying they were "deeply perturbed by the genocidal violence unleashed against Muslim citizens in the Indian state of Gujarat." They even asked the UK "to consider declaring Mr Modi and his cabinet members persona non grata, and to send a strong signal by refusing to host Indian home minister L.K. Advani, now or in the future." The sustained pressure on foreign secretary Jack Straw to take some firm action persists.

The Indian Muslim Federation invited him to a dinner to honour Lord Adam Patel. But the message was clear. Shamsuddin Agha, the federation’s president, says the Gujarat campaign will continue. The Council of Indian Muslims has also sent a petition to the OIC. "Like most other oppressed Muslims in the world, we have come not to have any expectations from the Organisation," the petition says, proceeding to the brutalities in Gujarat. All these groups are campaigning independently, and yet it has gathered momentum. Sanjay Suri