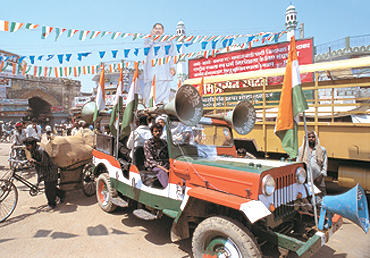 Black To The Power Of Elections ’09

Some describe it as the third stimulus package, after two official ones, for an economy that's hardly in the pink of health. Others dismiss it as a national phenomenon. Either way, as India prepares to vote in a new government this May, the polls are also a once-in-a-five-year chance for many voters to make a quick buck. This year, election-related expenses—official and unofficial—are expected to zoom: From Rs 4,500 crore in 2004, to anything between Rs 10,000-16,000 crore.

And yes, urban as well as rural voters are expected to line up for illegal cash benefits and other freebies. Of this, 80 per cent is likely to be spent out of the pocket of individual candidates (the Election Commission limits their pre-poll expenses to Rs 25 lakh). "It's an under-estimation, but we believe that each successful candidate could spend Rs 5 crore in his or her constituency. It was half this figure in the previous national vote," says N. Bhaskara Rao, chairman of the Centre for Media Studies (CMS), an independent think-tank.

Add spending by minor candidates, and the numbers grow exponentially for each constituency. There are 543 constituencies for the Lok Sabha, and a major one, with three or more candidates, could be worth Rs 5-16 crore in expenses. The estimates, made by CMS, are based on two surveys it conducted in 2007 and 2008 across income groups. "The spending—Rs 10,000 crore, which is the minimum we expect—is unimaginable. It's never happened at this scale before," says Rao.

What's worrying is that politicians don't bribe in the actual hope of winning. "I don't believe that Indian voters are electing the leader who pays them the most money, or selecting one who gives them more immediate gratification—a TV set, a sari or blankets," says Bhibhu Mohapatra, a Fellow with the India Development Foundation (IDF), a research outfit based in New Delhi.

Mohapatra thinks that pre-election bribes have more cynical underpinnings: "It has become a ritual, a habit, to bribe voters. A candidate cannot ensure his victory by giving a freebie or a cash 'reward'. But by not bribing at all, he ensures defeat in electoral sweepstakes," says Mohapatra. In its own study conducted in New Delhi prior to elections to the Delhi assembly last year, IDF found that almost all slum clusters and colonies were supplied with liquor and cash, in some places free food and snacks. In most clusters, the community elder was approached with the bribe.

Interestingly, the report says, "This was practised by at least three national parties in Delhi," implying that even candidates who don't expect to win use liquor "pouches" and cash—of Rs 500 per voter or thereabouts—only to ensure they stay in the running. IDF's survey was conducted between October 18 and November 24, 2008; 3,000 households from the Below Poverty Line (BPL) and Above Poverty Line (APL) categories were interviewed for it.

"If Rs 25 lakh is the officially allowed limit, and Rs 5 crore is actually being spent, then the difference is what we call black or illegally generated income by politicians and parties," says Prof Arun Kumar of Jawaharlal Nehru University, who has written extensively on the black economy and authored a book on the subject. "To the extent that TV sets are given away and saris are bought for prospective women voters, we could see (the bribes) as a redistribution of that illegal wealth," he says.

With that much money floating in the system, it wouldn't be misplaced to see larger benefits, or at least some cost-savings, for the voting public. Unfortunately, the benefits of these bribes are too thinly spread out—not targeted at all, say economists—and ultimately, the sums are negligible compared with the size of the economy. They will not create any "stimulus" at all, avers Kumar. At Rs 10,000 crore, the electoral spending is about 0.2 per cent of the country's Rs 50 lakh crore GDP. "Hardly anything, it's basically a waste," he says.

Happily, at least some proportion of the Rs 10,000-16,000 crore will go into purchasing and running services—the printers, transporters, counters, election watchers, messengers, guards, billboard painters—that will actually be useful for running the election itself. Of course, the elections also funnel a "huge amount of cash" directly into rural and urban homes, says Sarabjit Singh, who heads the Anti-Money Laundering practice at business and tax advisory firm BMR. "There has been a directive to banks from the government to monitor very, very closely the cash withdrawals from ATM machines at this point of time," he says.

Singh will not hazard a guess on the size of the black economy in India—Kumar pegged it at 40 per cent of the GDP in 2000, which, he now says, would have grown to 50 per cent of the economy. But by this measure as well, the election-related expenses are not significant enough to alter prices or stimulate demand. "Keep in mind that election-related expenses occur over a very short period, say a week. And the rest is spent, legally or illegally, over a month to 50 days at most. In this way, it can enliven an economy, but the impact is terribly short-lived," says Singh.

The Election Commission itself has been struggling with political parties' and candidates' propensity to drown rupees into this whirlpool of month-long pre-poll activity. "We want to dispel the notion that the law against illegal spending is not clear enough. In fact, no person can incur any expense related to elections without the written permission of a candidate. Even supporters' expenses will be added to the overall allowable limit for a candidate," says S.K. Mendiratta, legal advisor with the EC.

With roving observers recording visible expenses and constant examination of parties' records as well as notices galore, the EC seems to be doing its bit. What's not clear is why candidates who are invisible to the electorate for the better part of five years suddenly feel the urge to "compensate" voters with bribes. More so as it quite simply doesn't work.