Some more reading between the lines of the Partition saga 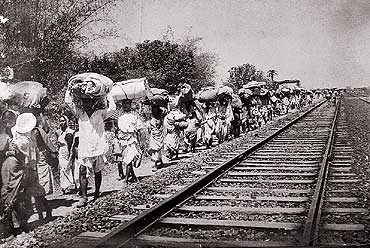 Many commentators believe India’s Partition exemplifies the “unfinished business” of most such partitions, of which the most bitterly contested and intractable is Kashmir. But it’s not just unfinished business. Suvir Kaul maintains it’s ongoing business too because “Partition’s afterlife still guides our public policy and inhibits our progress from colonial state to post-colonial democracy”. Further, he says, India and Pakistan “require Partition, or its more local reiterations...to justify state authority”.

Partitions of Memory, like other recent explorations of that shattering event, departs from political history and nationalist historiography to answer questions for those concerned with how Partition shaped relations not only between, but within, nations.

One of these questions has to do with forgotten histories. Mukulika Bannerji’s essay on the Khudai Khidmatgars of the nwfp is among the most interesting in this collection, for highlighting one of Partition’s abiding conundrums. Here was a people who fiercely resisted any identification with religion-based division, despite being 96 per cent Muslim; believed in non-violent struggle; and supported the Congress—but found themselves in Pakistan in 1947. The KKs, denounced and vilified by the Muslim League, posed this question to the author in the ’90s, when she interviewed them: “If East and West Pakistan could be separated by India, why could we not form West India and be separated from the rest of India by Pakistan?” But had that transpired, one is forced to wonder whether it would have become another Kashmir?

The schizophrenic nature of the India-Pakistan relationship is, as Richard Murphy says, enacted every day at sunset at the Wagah border, and every March in Lahore during Basant, celebrated with gusto by trendy Lahoris. “Mirroring” is what characterises both rituals; at Wagah “Indian and Pakistani detachments distinguish themselves and the larger wholes they represent, using a common symbolic language of uniforms, music and military drill inherited from the Raj”. At Basant, Lahoris reinvent a Hindu festival by investing it with rural Punjabi authenticity.

Of the four “memory” essays in this volume, Murphy’s and Bannerji’s are—literally and metaphorically—the most illuminating, both because they deal with contemporary Pakistan, and because they show how lived reality explodes the stereotypes of fixed identities on either side of the border. Bannerji’s interviews with the KKs skilfully juxtapose their memories with their descendants’ who—imbued with the present and five decades of post-Partition history—deny the relevance of such memories. Murphy’s is a much more complicated interleaving of past and present, of the selective appropriation of cultural practices, and of how the syncretic character of a city like Lahore is subtly transformed. Not completely, though. Centuries of shared living make rigid demarcations impossible—and yet, difference is forced into divisiveness.

The other two “memory” essays, Sunil Kumar’s on the Qutub Minar and Nita Kumar’s on children, have a much more tenuous link with Partition. Nita’s exploration of how 1947 is remembered by children in Banaras and Calcutta belies the expectations set up by her concern: teaching and writing about the nation in “ways that do the least possible violence, that respect and celebrate other higher and lower level un-mixing and unmatching histories”. She throws up some rather astonishing conclusions about an individual’s relationship to the nation.

The refugee’s ties to the state/government is the subject of Joya Chatterji’s and Urvashi Butalia’s essays. They’re more straightforwardly “historical” in that they deal with documents rather than “memories”. Butalia’s is an archive with a difference—Partition letters written during 1947-49, to various people in authority about jobs, shelter, offers of service, and sundry complaints to the sarkar as mai-baap. Chatterji’s richly-detailed analysis of West Bengal’s rehabilitation programme in the immediate post-Partition period is also about employment, housing, social security and reconstruction, but whereas Butalia’s letter-writers (mostly Punjabis) appeal to the state’s benevolent disposition, Chatterji’s refugees demand political and economic rights from the government. Herein lies the difference between the Punjab and West Bengal experiences. In the latter, where the influx of refugees was protracted and, ultimately, much greater (25 million in 50 years), organising around rights made for the emergence of the Left Front as a long-term political force. In Delhi by contrast, although the Jan Sangh was an important factor in refugee rehabilitation (certain “refugee” colonies and communities support the bjp to date), it was unable to make political capital on this effort.

Each new, and different, examination of Partition reminds us how much more lies buried, unexplored. Take Priyamvada Gopal’s treatment of Manto’s Thanda Gosht, of which we thought all had been said. But it awaited a gendered reading—and Gopal’s is most intelligent—not just of this story but of Manto’s Partition oeuvre. And Ramnarayan Rawat’s account of Dalit politics and Partition politics underlines one of the least researched aspects of identity-formation in the context of Partition.
As with other recent writing on Partition so, too, with this volume—we realise the more we read, the less we really know about it.