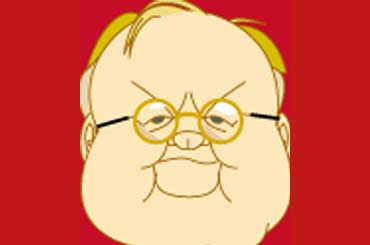 illustration by Jayachandran
Vinod Mehta May 05, 2003 00:00 IST The Ugly American

outlookindia.com
-0001-11-30T00:00:00+0553
Forgive me, but I am not going to add to the flood of tears being shed at the functional demise of US Ambassador Robert D. Blackwill. Whether he is a victim of the Paki-loving Christina Rocca, thereby making our man in Roosevelt House, New Delhi, a martyr to the cause of cross-border terrorism seems to me, if I may borrow one of the ambassador's favourite phrases, an "academic question". Most probably, he is a casualty of the serious infighting at the very pinnacle of the Bush administration; perhaps our Robert kept throwing the name of George W and Condoleezza too often thus annoying Colin and Donald. Selective and motivated leaks from all sides, including our foreign office, will ensure that the truth is never known.

Good. What should be worrying us in India is not the abrupt departure of Blackwill but the disposition of the man. Now, before you jump to the conclusion that Outlook and its perverse editor are running a campaign against an American ambassador, it would be useful to remember that this magazine worked pretty harmoniously with Frank Wisner and Richard Celeste. Richard and Jacqueline, in fact, were seldom far away from our columns, while the suave Frank Wisner, besides serving superb Kashmiri trout, was arguably the most successful and popular envoy since the late Daniel Patrick Moynihan. Outlook, indeed most of Indian media, was entirely at ease with both Celeste and Wisner.

In contrast, Ambassador Blackwill's resignation, or fall from grace as it were, is a morality tale of the new American imperium. His political lineage, his political networking, his political worldview, his political vocabulary, his political mode, is that of the ruling cabal in the Bush White House. In fact, what we have witnessed for the past two years in India is the behaviour and the elan of the plenipotentiary of a hyper-power, currently in the firm custody of President George Bush and his team. Blackwill's diplomatic strengths, his tenure record, his two-year achievements are, for me at least, not half as instructive and illuminating as the way he has conducted himself during his brief stint.

A study of the manner and style Blackwill adopted during his ambassadorship here can give us a glimpse and understanding of the mindset of the sole superpower we, and the rest of our frightened planet, have to live with. Perhaps, through this study we might find some tentative answer to the anxieties which terrify us presently—anxieties which persuade even sober people to ask questions like: Could Bush drop a bomb on Race Course Road? Could India become part of the "axis of evil"?

When Blackwill arrived in India in August 2001, he came determined not just to transform Indo-US relations but to reposition Roosevelt House in our scheme of things. The US Embassy, and more especially his grand "round table", was to be the forum where the best and the brightest of India's political class would gather, eat, talk and, under the ambassador's deft leadership, make policy. I was privileged to be present at a couple of such occasions—burger-chomping film shows (John Wayne in a bad John Ford movie relentlessly pursuing a wanted Red Indian, read Osama, and eventually getting his man), discussions on how Pakistan could be defanged, debates on the new world order...and had the opportunity to observe the extraordinary energy, earnestness and a sense of almost divine purpose with which Blackwill supervised proceedings. It was difficult not to believe that monumental decisions would be taken as a result of our parleys. After one such marathon dinner I walked out of Roosevelt House feeling slightly dizzy. Such was the ambition Blackwill brought to his job.

The besetting sin of the George Bush cabal represented in India by Robert Blackwill is hubris.That the US Ambassador to New Delhi should have a sense of self-importance, that he should see himself as the first among equals is understandable. After all, he is the US Ambassador. However, Blackwill on a personal and professional level is not merely arrogant ("I pick up the phone and call Jaswant Singh or Brajesh Mishra or George Fernandes or Advani.... If I need to see them on the day they will see me on the day"—(Outlook, March 11, 2002) and rudely impatient, he believes his judgement on any matter requires to be written on tablets of stone. There is a biblical certitude emanating from his mouth and those who cavil with him are not just worthy of contempt and ridicule, they are ignorant, malign and, above all, anti-American. If you are anti-Bush, you are anti-American. The rest is pinko sophistry.

His attitude is the antithesis of the true democratic spirit, a spirit which recognises "dissent" as the cornerstone of free societies and recognises that the dissenting could have a point. For an ambassador of a country which flaunts its constitutionally protected Free Speech and First Amendment, this attitude is, at the very least, curious.

Or is it? Ambassador Blackwill, we are constantly reminded, was "handpicked" by the US President himself for the Delhi posting and what we have seen of President Bush and his entourage ("punishment" for the uppity French is the latest example) in the past year or so suggests that the handpicked nominee mimics his master brilliantly. During his stay here, Blackwill also divided India into "for us or against us". By that yardstick his term has been a triumph.

Graham Greene's Quiet American was a misunderstood idealist who created havoc because he was artless and "listened too much". Now we have the Ugly American who creates havoc by ideological design and does not listen at all. Happily, there is also a species called the Wise American. Let us hope and pray he wins in 2004.

The Black Will To Power