The Two On Two Math 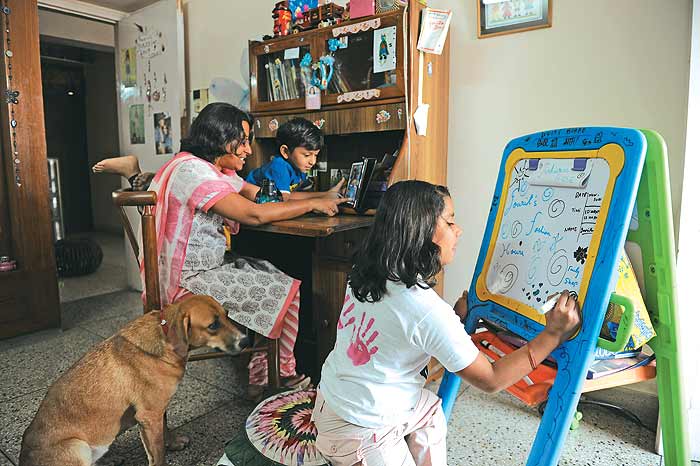 “Did you learn the most important lessons of your life in school?” asks Manish Jain, an educationist. He has asked this question to over 5,000 people till date and the answer has always been in the negative. Always. The question goes to the heart of what we ‘brand’ as learning. To most of us, schools that teach the three Rs and a set syllabus is an integral part of our children’s education, the key to a secure future. But now there are a healthy number of parents in Pune, Bangalore, Mumbai, Delhi and even smaller cities like Udaipur, Surat and Varanasi, who are questioning this practice.

The reasons why they seek an alternative vary. Ruchi Kaushik, a doctor, could not understand why parents were putting their child into “pre-nursery classes” just so that they are “prepped” to clear school admission interviews. “I promised myself that I wouldn’t send my son Saras to school that early and ended up home-schooling him when I realised he was too bright for school.” It’s a gamble that has paid off, with Saras, a child prodigy, making it to IIT at age 14.

Vidya Shankar in Chennai had a markedly different problem. Her son was repeatedly being hauled up to the principal’s office. “Sometimes it was because he was disruptive in class or had bad handwriting. His teacher continuously shamed him and demeaned him,” she says. It wasn’t long before Vidya took him out of school and taught him at home with some help from Saraswati Kendra School, an open school, where her son went for classes twice a week for the socialisation he craved with kids his age. Vidya has since started Cascade, a “learning space” for home-schooled children in Chennai with other parents who want to turn away from the factory-like schools. “Have you seen the schools nowadays? They have 10,000 or more children within their walls. That’s not a school, that’s a prison,” says Vidya.

Ann Manning, one of the first home-schoolers in Mumbai, wanted to bring up her son and daughter (now 23 and 27 respectively) with Christian values like charity and compassion rather than the cut-throat competition encouraged in schools. Another Mumbai home-schooler, Mathew Peedikayil, was appalled by the narrow scope for interactions and the curriculum at regular schools. “Kids just mug up facts to pass tests, they only interact with kids of their age. That’s not how life works. In life you have to interact with people of different ages, in different situations. And schools don’t have playtime anymore so their socialisation skills are really affected,” he says.

But questioning the mainstream doesn’t mean that they have abandoned it entirely. They have still maintained a link, albeit tenuous, with mainstream education through exams. They coach their kids using the cbse or ssc syllabus so that they can give their 10th and 12th boards through the National Institute of Open Schooling. Some parents, especially ones who have lived in the US or UK before returning to India, prepare their kids for the International Baccalaureate program or the Cambridge International General Certificate of Education’s A and O levels.

But there are also bravehearts who are making a clean break from any form of conventional education. “Unschooling is about growing in complete freedom, without curriculum or board exams,” says Urmila Samson who has three kids, daughter Sahya, aged 19, and two boys, Rayn and Niom, aged 14 and 11 respectively. None of them, except Sahya, who briefly attended school for a few weeks, have ever seen the inside of a classroom and they are not sitting for any exams either. “We do not separate book learning from all other kinds of learning, nor do we give it more importance than other kinds of learning, like how to handle emotions, how to stay healthy, physical activities and survival skills like farming and cooking, community interactions. In short, everything that goes on that is relevant to the individual, rather than the state or the corporate world,” says Urmila.

Even for home-schoolers, these “unschoolers” are too radical a bunch. To reject the mainstream completely is something deeply unsettling for most parents. But for unschoolers, it is a way to create complete human beings in charge of their own learning and thus, their own destinies. For Dola Dasgupta, unschooling has meant allowing her children, aged 10 and five, to learn from a wide range of life situations and tools. “In radical unschooling, every opportunity in everyday life is seen as a potential learning experience. My children learn in ways that are intrinsic to their intuitive nature. I, as the facilitator of their learning journey, just provide the impetus, resources and knowledge.”

Kanku’s mother worries, but father Manish is nonchalant. As he puts it, “Tagore didn’t start reading till he was 10.”

Resources could mean a trip to an organic farm, or watching films, or learning through the internet, or talking to people in the neighbourhood. “It means that any source of inspiration is a guru,” says Manish Jain. With a rich and varied background, including two years spent on creating UNESCO’s Learning Without Frontiers transnational initiative, Manish is a co-founder of Shikshantar in Udaipur. It’s now one of the main hubs of self-directed learning that unschoolers in India gravitate to. The philosophy is simple. The factory model of schooling is seen as part of the problem where children are put through a homogenised learning experience that creates dull adults who have fixed answers to fixed problems and most horrifyingly, fixed views, and are unable to think out of the box. As Manish puts it, each child has different skills and interests that need to be nurtured through an “individualised, not individualistic” learning path. It means recognising apprenticeship and other experiential learning practices as more powerful and useful than mere theoretical knowledge spoon-fed to children. It means that someone with an MBA degree might be less successful at running a business than someone who might be illiterate but has learnt the ropes by actually running one.

Manish’s own child, Kanku, still hasn’t learnt to read or write fluently but successfully helps run a pani-puri store, sells hand-crafted items at their local ‘gift-culture’ cafe and knows almost as much as a professional make-up artist (this by watching online make-up tutorials). While Kanku’s mother worries about him, Manish is nonchalant for, as he puts it, “Tagore didn’t start reading till he was 10”.

Now, inspired by Manish, more parents are debating an education system that fails to create real learning and only provides the top achievers with financially successful careers. One such couple is Anita Borkar and Nitin Paranjape, who have been working with community media initiatives. After they and their child Sakhi interacted with Manish over a year, Sakhi decided to quit school. She started studying at home and kept up with friends by organising Warli painting sessions and the ‘Teenage Film Club’. She’s learnt two languages, dabbled heavily in art and music and travelled all over the country with her parents. After giving her 10th boards through nios, she decided to try formal college education at the local Nashik university and topped the arts division. It was this ‘success’ that changed attitudes in her community for people have since opened up to the idea.

Sakhi is now part of the initial batch of students at Swaraj University, the first self-directed learning institute in India. The students and facilitators—including Manish, Anita, Nikhil and Reva Dandage, who has fought her own long battle with mainstream education— call themselves “khojis” or seekers. Meeting every two months and keeping in touch via Facebook and newsletters, each khoji seems thrillingly unique. Like Vikas Wadje, 28, who saw India hitching rides on trucks, worked at marketing pesticides before quitting it all and turning to organic farming and ayurveda. He is learning from a traditional ayurvedic healer, and has asked to apprentice with him for five years.

Then there’s Harshita Wadhya, 23, a Lady Shri Ram College (Delhi) graduate who just got tired of the rat race and is exploring alternative healing techniques. Jayesh Mohta fought his family to quit his job at a broking firm to pursue theatre and has opened an organic cafe and “learning and doing space” in Udaipur. Rama Barhat, who was scared of even travelling alone before but had nursed a long-time dream of making films, is thrilled at winning an online International Student Filmmaker award—her film Jazba was shown at the Women’s Voices Now film festival in New York. She’s now travelling across the country to hone her craft. Rahul Hasija got through IIM and TISS and was remarkably depressed about it before he began accessing alternate learning spaces, like a library in Indore called Banyan Tree, where he first read about the failures of the Green Revolution, about Monsanto, about the lesser known aspects of globalisation and privatisation. After meeting Manish, he decided to join Swaraj University but is still undecided on a long-term future.

While their stories differ wildly, there is something similar about all the khojis. They are all very articulate, very alive and very opinionated. So much so that some like Sakhi even question the ‘alternative’ system, talking about the “security” of a formal degree, before commenting that she isn’t sure she’ll fit in anymore. Meanwhile, others who have been through the grind, talk about the suffocation in mainstream education and careers that they feel no longer haunts them. Their self-confidence is bewitching to watch precisely because they are so sure that they’ll achieve whatever they want. Eventually. Roger Waters must feel proud. They certainly have come a long way without schools and (formal) education!