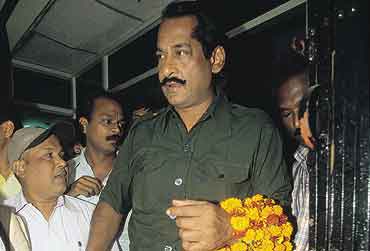 outlookindia.com
-0001-11-30T00:00:00+0553
Chhattisgarh's outgoing chief minister has been taught a bitter lesson—the voter will not reward mudslinging, games of intrigue and holier-than-thou acts. Especially not when it has become common wisdom that politics and corruption are willing bedfellows and that Jogi himself is hardly above board. If he thought that a sting-operation vcd showing the BJP's Dilip Singh Judeo accepting bribes would make the difference at the hustings, then Jogi was surely mistaken.

With the BJP romping home, a visibly shaken Jogi promised to fulfil his obligation to the voters by providing "a strong and responsible" Opposition. Strangely, a month ago Jogi was on a much surer wicket than he was in the last week before Chhattisgarh went to the polls. "Judeo might be corrupt, but Jogi's no angel" is the mantra that seems to have guided the voters, even as the outgoing CM's friends played the vcd over and over again.

Jogi's hate campaign really boomeranged. And badly. In an election that witnessed more than 68 per cent voter turnout, Jogi's defeat was a foregone conclusion that no one was willing to utter till the final results were out. It's perhaps a telling comment on a man who was, until yesterday, regarded with fear and hatred. But today, tongues are wagging faster than a dog's tail. "Undoubtedly, Jogi has caused damage to the party and its reputation," says a local Congress leader.

In the fortnight before the state went to polls, the resentment against Jogi had been building up. Stories about his machinations and his dictatorial style not only circulated in the towns, they seeped down to the villages too, especially in the aftermath of the Judeo episode. "The politically uneducated rural voter suddenly became aware of hidden cameras and games of intrigue, and was filled with distaste," says a Congress leader. Political observers say Chhattisgarhis see a definite Jogi hand in the Judeo vcd. And even though the incriminating evidence against Judeo may have dented the BJP's chances initially, the party was able to sling some of the mud back by constantly alleging that Jogi and his son were directly behind the sting operation.

Judeo himself enjoys considerable clout in his home district of Jashpur. Three of the four assembly seats in his fief went to BJP candidates. Additionally, the party has made significant inroads into traditional Congress strongholds such as the three tribal districts—Kanker, Bastar and Dantewada—which were carved out of the original Bastar district after Chhattisgarh became a state. There it has won 10 of the 12 assembly seats.

The NCP, led by V.C. Shukla who deserted the Congress a few months ago after facing protracted marginalisation, could only manage two seats. However, state NCP general secretary Anil Verma insists the party has achieved its primary aim of "destabilising Jogi". Jogi quickly dismissed the NCP: "It just proves what I have always maintained. In Chhattisgarh, there is no room for a third party." The only question that remains unanswered now is: Will Congress under Jogi be that third party?