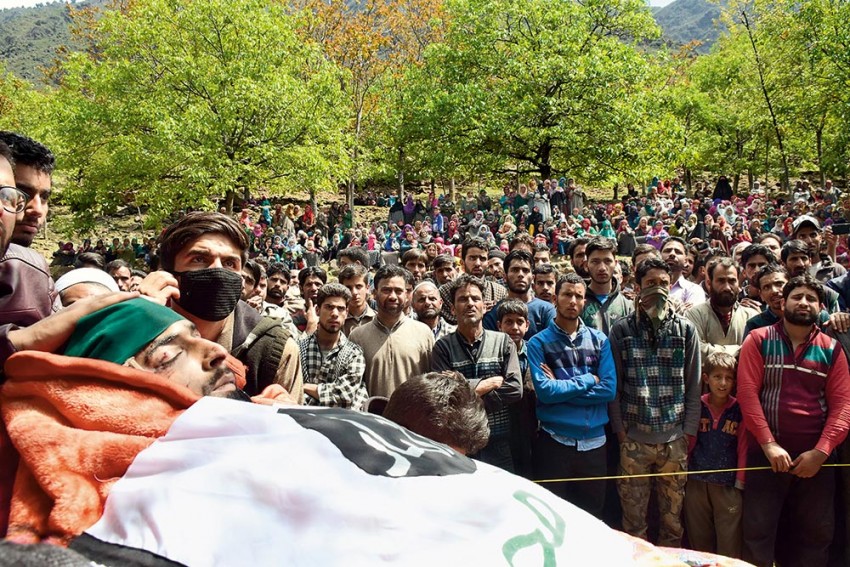 Endgame
Funeral of Jaish militant Ishfaq Ahmad at his village in Tral
Photograph by Getty Images
Naseer Ganai May 02, 2018 00:00 IST The Turn Of The Fidayeen 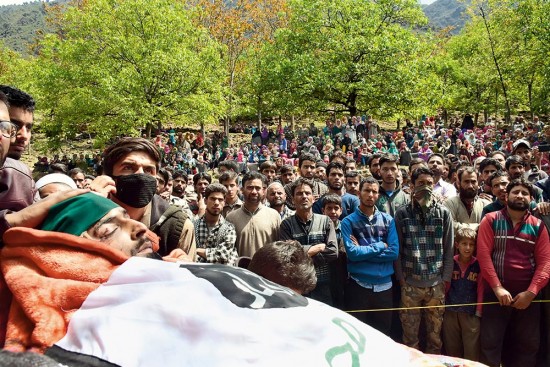 On the morning of April 24, a fierce encounter broke out in south Kashmir’s Tral region. Unlike most gunfights between militants and security forces in the Valley, this encounter didn’t take place in any residential building, but in the hilly forests of Laam. Four militants, an army personnel and a pol­iceman were killed in the encounter. The police identified the militants as belonging to the outlawed Jaish-e-­Mohammed and claimed to have rec­overed a large cache of arms and amm­unition. “It shows the Jaish has no dearth of weapons,” says an official.

One of the slain policemen, Lateef Ahmad Gojri, was a local from Tral. Lateef had joined the Special Operations Group (SOG), a counter-insurgency force of the Jammu & Kashmir Police, in 2000 after his cousin, Areeb Gojri, who was also working with the SOG, was killed in a militant attack. Two of the slain militants—Ishfaq Ahmad Khan and Abid Maqbool Bhat—were from Tral, while the other two were from Pakistan. Abid, son of an assistant sub-inspector of the J&K Police, was a student at a polytechnic INS­titute before he joined the Jaish around two months ago. Ishfaq was the son of a farmer and worked as a painter before taking up arms. His first cousin, Abid Khan, a top Hizbul Mujahideen commander, was killed in January 2015.

The police identified one of the Pakistani militants as Mufti Yasir, the Jaish’s operational commander, who was once the personal security officer of Pakistan-based Jaish chief Maulana Masood Azhar. The police described his killing as a major breakthrough as Pakistan has been getting Jaish militants to infiltrate into the Valley in a big way—perhaps to give some respite to the Lashkar-e-Toiba and the Hizbul, which lost a large number of militants this year.

The Jaish was formed in January 2000 by Masood Azhar after he was released in Kandahar, Afghanistan, in 1999, following the hijacking of Indian Airlines flight IC-814. Security agencies see the revival of Jaish as a new challenge bec­ause it has the potential to change the pattern of violence not just in Kashmir, but also elsewhere. Jaish was the organisation responsible for the pre-dawn suicide attack on February 10 at the Sunjuwan army base close to Jammu city, in which six soldiers and three militants were killed. The attack showcased Jaish’s ability to attack anywhere in Jammu and Kashmir. Three Jaish militants were also killed in the attack.

Jaish is among the most-feared militant organisations as it specialises in suicide attacks on security forces to create a big impact. “That is why Jaish is critical,” says a senior police official. Observing that the average age of rec­ently infiltrated Jaish militants is higher than that of Kashmiri militants in general, police officials say they must be battle-­hardened with experience in Afghanistan or other conflict-torn regi­ons.

In the past seven months, 38 Jaish militants have been killed, including top commanders  Mufti Waqas, Mehmood Bhai, Talha Rasheed and Noor Mohammed Tantray. Only five of them were killed along the Line of Control. “We are trying to contain the Jaish militants systematically,” says Ins­pector General of Police (Kashmir range) Swayam Prakash Pani.

Yasir had replaced Waqas, who was killed in a brief encounter at Lethpora village in south Kashmir in March. According to police sources, Waqas was active in Kashmir for more than a year and had plotted the February 10 attack on the Sunjuwan army base. Talha and Mehmood were killed in an encounter at Aglar village in south Kashmir’s Pulwama district last November. The police had identified Talha as Masood Azhar’s nep­hew and Mehmood as a divisional commander of the Jaish.

It was, however, the 47-year-old Tantray alias Noor Trali, who, according to the police, was instrumental in recruiting locals to the Jaish and providing the organisation the cover it needed. Just three feet in height, he played a key role in the sudden resurgence of the organisation after years of lying low in the Valley with just a few militants in its fold.

Tantray was killed in a gunfight last December with a joint team of the police and the army in Samboora area of Pulwama. The police believe he was one of the chief architects behind the attack on the BSF camp at the Srinagar airport on October 3, 2017, in which one BSF officer and three militants were killed. Last August, Tantray had all­egedly provided logistical support to Jaish militants who stormed the district police lines in Pulwama, leading to killing of five security personnel.

Noor Tantray, just three feet in height, had been playing a key role in recruiting local militants for the Jaish.

In the police records, Tantray was listed as a close aide of the 2001 Parliament attack’s all­eged mastermind Ghazi Baba. After Ghazi Baba was killed on August 31, 2003, Tantray was arr­ested from Delhi’s Sadar Bazar. The Delhi Police claimed to have recovered Rs 19.2 lakh from his possession and accused him of being in touch with Jaish militants. In 2011, Tantray was sentenced to life by a POTA (Prevention of Terrorism Act) court along with four other Kashmiris. After some time spent in Delhi’s Tihar jail, Tantray was shifted to Srinagar and released on parole—first in 2015, followed by several extensions.

During the period between his release on parole and going underground in July 2017, the Jaish mouthpiece Al-Qalam published a 10-part series on him, in which he was described as an astute strategist. The essay on “Moulvi Noor Mohammed” narrates how he hoodwinked the police and security agencies while organising local cadre for the Jaish during his time on parole. And when the security forces found the Jaish’s footprints in the ­series of grenade attacks across south Kashmir in 2016, they reportedly started summoning “Moulvi Sahab”, who alw­ays managed to convince top ­police and counter-­insurgency officials that the Jaish couldn’t be inv­olved in such acts.

In 2016, Tantray, according to the Al-Qalam essay, worked to increase the cadre strength of the organ­isation and received the new infiltrators from across the border. “Moulvi Noor Mohammed had made such arrangements that in early 2017, when Mufti Waqas entered Kashmir along with his group, his reception was like that of an affluent host coming forward to receive his prominent guest and then take him to his residence, holding his hand. This happened in reality,” reads the essay, which goes on to laud the end­eavours of Moulvi Noor that ensured Waqas never faced any difficulty in finding space and shelter in the cities and jungles of Kashmir.

Moulvi Noor, according to the ­Al-Qalam essay, wanted to extend the Jaish network across the Valley while arousing the suspicion of sec­urity agencies. Due to “some jihadi strategies”, however, the Jaish stepped up its grenade attacks in south Kashmir. The police, as usual, questioned Moulvi Noor, but he, as was his wont, made the police believe the Jaish had no hand in it.

The police say Tantray used his old jail connections to provide local cadre for the militant organisation, but couldn’t be as successful outside Tral and adjoining areas. He eventually joined the Jaish on July 15, 2017, and is said to have carried out reconnaissance of security forces camps before suicide attacks, including one on the Lethpora paramilitary camp on the first day of 2018. Fardeen Khanday, a 16-year-old from Tral, who had joined the Jaish in October 2017, carried out the att­ack in which five personnel were killed.

In a video recorded before the attack, Fardeen, son of a police constable, claimed that militancy is not the result of unemployment, but “a reply to Kashmir’s illegal control by India”, ­besides urging Kashmiri youth and Muslims across India to join the “fight against India”, and hailing Masood Azhar and Afzal Guru. A senior intelligence officer says 24 live grenades were found on Fardeen’s body, indicating he had planned for a long battle. The ­encounter lasted around 36 hours and ended with his death. Police sources peg the number of Jaish militants in Kashmir at just 26, including five or six locals, but, given the Jaish’s expertise in mounting audacious attacks, government forces are taking no chances.

“The Jaish is involved in high-profile att­acks. The outfit must be contained using intelligence-driven oper­ations, and that’s what we are doing,” says IGP Pani.