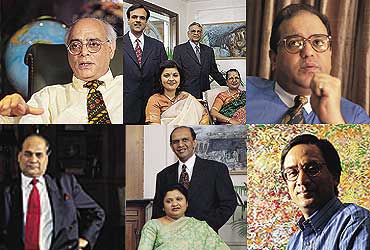 outlookindia.com
-0001-11-30T00:00:00+0553
Anil Nanda has always been finicky about doing things his own way, be it business matters or the house decor. So much so that his father, the late H.P. Nanda—an old-style Punjabi refugee who built Escorts from scratch—once commented that his younger son should never marry, for he would only be getting into fights with his wife. Well, Anil, now 51, hasn't married yet. While he may have escaped the bickering over how the dinner table is laid out, he has landed himself in a bitter business feud with brother Rajan, who is 10 years elder to him.

The central issue at the moment is the younger Nanda's opposition to the proposed sale of 17.1 per cent equity in the prestigious Escorts Heart Institute & Research Centre to Merlion India fund, owned by the Singapore-based Temasek Holdings and Standard Chartered Bank, for Rs 65 crore. However, it looks like snowballing into a battle for control of the group's flagship, Escorts. Anil now claims he owns the majority of the promoters' holding (of 35 per cent) in the company. "I will prove it. It has been willed to me," he told Outlook.

Feuds in business families are hardly uncommon in India. The Birlas, Modis, Goenkas and, most recently, the Bajajs, have all gone through it. "Globally, it has been found that family businesses begin to split in the third generation," says K.N. Memani, chairman and managing partner of Ernst & Young in India.

But some recent family dramas—like in the case of the Nandas, Bajajs and Rais —are unique in quite a few ways. First, some of them are happening in the second, or even the first, generation. And family members seem to be in a real rush to part ways. Second, most of these groups fall in the midsize category, the empires either shrinking or not growing too fast in the past few years. Finally, they're almost all between brothers. In fact, the spate of sibling rivalries seems to be driven by "post-liberalisation blues".

There was a time in the '80s when all these groups were on a roll. Having perfected the ability to make use of and thrive in the licence raj, their empires grew manifold. But things changed dramatically by the mid-'90s when the full blast of the liberalisation wave hit them. Unable to cope with competition, these promoters found it difficult to flourish, or even survive. Some like the Rais saw their empires vanish, a few (Nandas) realised they are unlikely to grow, and the others (Bajajs) have resigned to the fact that they can never regain their near-monopolistic dominance.

Coupled with this scenario was the issue of unfulfilled personal ambitions of usually the younger brother, who invariably had to take a backseat. Over time, the younger siblings realised that if they don't ask for their share of the pie now, there may be nothing left to divide. Or that the elder one may walk away with whatever was left. Obviously, a revolt became imminent—and most often it happened.

Cut back to the Nandas, where thanks to the unmarried status of Anil, the family has just one heir, Rajan's son Nikhil (who's married to Amitabh Bachchan's daughter Shweta). Logically, Anil must have felt that if he doesn't act fast, he would end up losing it all. But the question is why he acted now, especially when not too long ago, everything seemed hunky-dory. Just last year, Rajan threw a party to celebrate Anil's 50th birthday and Anil to celebrate Rajan's 60th.

In fact, the portly Anil hardly fits the description of someone who would trigger off a bitter corporate war. For 50 years of his life, he has been content to live in the shadows of first his father and then brother. He played an active role only in the motorcycle business, which was divested in favour of the foreign partner Yamaha, and the ancillary venture, Goetze India.In between, he dabbled in an upmarket grocery chain, Nanz, which wound up, and designer denimwear that not many chose to buy.

After his failed forays, Anil was left with nothing except the Rs 400-crore Goetze, where he assumed control by buying Escorts' 27 per cent stake in the company and increasing his holding to 30 per cent. In comparison, Escorts, which is run by Rajan, is a Rs 1,000-crore company, although its fortunes have been fading a bit and its marketshare in the tractor segment is way below leaders Mahindra & Mahindra and Punjab Tractors.

So, when Rajan decided to sell a stake in the hospital venture, Anil couldn't take it anymore. In an exclusive interview with Outlook (see box), he explained that he can't just stand aside and watch the Escorts Institute being used for a profit motive. He especially objects to the manner in which the charitable society was first turned into a private company in 2000 and is now being sold.

According to him, a society with an identical name was first established in Chandigarh in 1999. The Delhi society was then amalgamated with the Chandigarh outfit. This roundabout manner, says Anil, reeks of wrongdoing. "You expect me to digest his fraudulent, unethical activities?" he asks. Anil is also unhappy with the decisions to pull out of several companies and the declining financial health of the flagship, whose net profit fell to Rs 8 crore in 2001-02 from Rs 107 crore the previous year—before recovering to Rs 24 crore in 2002-03.

The battle intensified, obviously, since Rajan is dismissive of his kid brother and denies that the latter has been "willed" a majority stake in Escorts. "He is talking of a 74 per cent stake in a (holding) company that holds barely 4 per cent of Escorts," he explains. On the question of declining bottomlines, Rajan cites the downturn in the agri business as the reason. Also, he says the group has pulled out only from those companies in which it could not add much value due to lack of technological knowhow. Finally, the Escorts Heart Institute conversion, he says, has been done "in a manner consistent with and respectful of all the laws governing the country".

But once the senior Nanda is done with business matters, he launches into a personal attack on Anil. First, he denounces his brother as one "being critical for the sake of being critical". Getting more scathing, he adds: "He (Anil) is not involved in healthcare in any way. He's just a spectator. That he has chosen to raise the dispute is a personal issue. It could be the result of unfulfilled personal interest."

In a way, both the brothers are accepting of the fact that Anil has never been a frontrunner. A similar mindset can be seen in the Bajaj saga, which matured into full-scale public bickering late last year. The dissent that Rahul Bajaj, very much the head of the family since the 1960s, had to contend with didn't come from any of his cousins—Shekhar, Madhur and Niraj— but from his younger brother Shishir. To resolve the issue, help was sought from formidable mediators like ex-Maharashtra CM Sharad Pawar, family wellwisher Dhirajlal S. Mehta, and Swadeshi Jagaran Manch convenor S. Gurumurthy.

As per the deal worked out, Shishir will now get full control of Bajaj Hindusthan and Bajaj Consumer Care. In return, he will give up his stake in all other group companies, including Bajaj Auto.Yet again, the split which is happening in the third generation, was driven by Shishir's attempt to secure a share of the pie, and also safeguard the future of his son Kushagra who looked unlikely to get much of a role in the group's flagship, Bajaj Auto. The reason: Rahul's sons Rajiv and Sanjiv already head the key functions of business development, marketing, and finance in the scooter giant.Here again is a group that was not growing in terms of new ventures, and whose flagship has been fighting a losing battle to retain its marketshare in the two-wheeler segment. The usually voluble Rahul Bajaj is however keeping quiet on the matter, saying only that "it is a sensitive issue".

Probably the best example of a split that took place due to a "vanishing" empire is the parting of ways between Vinay Rai and younger brother Anil. Vinay, once on the Forbes list of richest people in the world, is today trying to make a success of his education venture, Rai University. And Anil is attempting the same with his more elitist education venture, iilm. In their case, the two steel companies they owned, Usha Ispat and Malvika Steel, are defunct and so is the software venture Information Technology India. But they still claim to be together. "We still live in the same house and have dinner together," says Vinay.

But it's logical to assume that somewhere deep in their hearts they blame each other for the demise of their once-expansive empire. And that they now want to strike out on their own. Why else would both set up separate companies in the same area, education? "There is a lot of prestige associated with independent management control. Often, succession plans tend to distribute wealth equitably but fail to deal with the issue of management control as equitably. This results in a feeling of loss of control among the younger siblings," says Ashwani Puri, executive director, PricewaterhouseCoopers.

This is more so when younger siblings feel the empires are not only not growing, but becoming smaller. But, splits or no splits, family businesses are a mainstay in India. As Gurumurthy concludes, "Family businesses will continue in India for the next century at least."