The Truth, Not Out!

Something about the Abhijit Kale affair doesn't make sense. Is he a victim? Updates 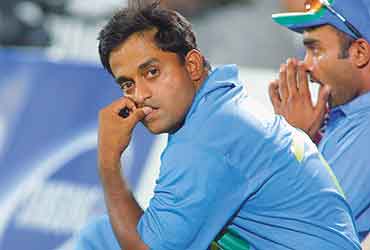 outlookindia.com
-0001-11-30T00:00:00+0553
Abhijit Vasant Kale, if one goes by the whispers in the circuit, was not the most popular of cricketers. His teammates say he had a chip on his shoulder, was too pushy, had little patience. But at 30, with a spectacular first-class record, even the most patient of men may start getting a bit edgy. After all, he had scored 6,806 runs in 84 first-class matches, with 24 centuries and 27 half-tons (that is, at least 50 runs in more than 60 per cent of the matches he played), at an average of 58.67 (though averages prove nothing by themselves, the corresponding figures for Sachin Tendulkar, Dinesh Mongia and Yuvraj Singh are 61.08, 54.91 and 41.8 respectively).

Yet, though an India A regular, the only time Kale made it to the big league was this year's TVS Cup in Dhaka, which the stalwarts had dropped out of. He played one match against Bangladesh and scored 10 runs. And that was it.

Kale's attitude has been questioned in the past. He often asked fellow cricketers why he was being ignored. He had also rubbed the selectors the wrong way. Even when selected for the India A tour to the West Indies this year, he is believed to have had a few angry words with the selectors. For the past few weeks, he was frustrated, more than ever. From being on the doorstep of the Indian national side, he had been turned back. And his tongue, his colleagues say, had become sharper and looser. Could it be that in frustration Kale had unwittingly taken some names and the talk got back to the powers that be and they decided to teach him a lesson?

Because something about l'affaire Kale does not make sense. Why would this man, who is already an India A regular, call up national selectors Kiran More and Pranab Roy and offer them Rs 10 lakh each for a place in the same side? Especially when an India A player would make only about Rs 4 lakh on a tour? (The selectors involved have now changed their version and claim that Kale was gunning for a berth in the national team. Also that it was not Kale but Kale's mother who approached them.)

And these are just two of a slew of questions the BCCI needs to probe and answer (see box). But then, "transparency" is not a word one associates too much with the Indian cricket control board. And by banning Kale without any inquiry, without so much as a showcause notice, the board already seems to have taken sides. After all, it's common knowledge that both More and Roy are close to the man who runs Indian cricket, Jagmohan Dalmiya. So one supposes it was natural for Dalmiya to believe them.

But from the day More and Roy revealed Kale's alleged queue-jumper tactic, revelations and accusations about sleazy selectors have been coming thick and fast.


Indeed, as early as '97, Outlook had spoken about this (see box). A few months before our exposé, journalist Rajan Bala wrote that a selector had asked Nayan Mongia for Rs 2 lakh to pick him in the team for the Asia Cup. Apparently he had told the stunned Mongia, who should anyway have been in the team: "After all, you earn so much from match fees, endorsements and TV commercials." Mongia refused to speak on the matter to Outlook.

The inescapable truth is that there is simply too much money in Indian cricket for it to be fun and games and all above board. Indian cricketers came back from the World Cup richer by Rs 80-90 lakh, even someone like Parthiv Patel, who did not play a single match. And the current tour to Australia is likely to fetch Rs 40-45 lakh for each player. So, a Rs 20 lakh investment would turn in a 100 per cent profit within two months!

Vanka Pratap, in fact, mentioned a specific player, former Hyderabad off-spinner Noel David, who was sent as replacement for an injured Javagal Srinath for the 1996-97 India tour of the West Indies. "Noel was not even sure of a place in the Hyderabad team, but he was picked for the Indian team," he said. David, when contacted in Dubai, was indignant: "This is utter rubbish," he said. "Also, I think it's very difficult to bribe a selector. At all levels of selection, it's never an individual who makes the final decision. It's a committee and I think it's highly impractical for a player to try and approach a majority in the selection committee. It's too risky and suicidal." He has since threatened to sue Pratap.

Interestingly, David thinks Kale is innocent. "Someone, somewhere is lying," he said. "I don't know the motivation for this lie but I am sure it has nothing to do with money. It's a personal feud that has exploded. Someone wants to finish off Kale's career." In an interview to Outlook (full text on www.outlookindia.com), the outspoken Lele, who was BCCI secretary when David was selected for India, gave his version of the episode. "Captain Sachin Tendulkar was against David's selection. Why, he hadn't even heard his name. When Srinath got injured, I received a faxed message from Tendulkar. He wanted an extra spinner and had two off-spinners in mind—Baroda's Tushar Arothe and Hyderabad's Kanwaljit Singh. I informed the selectors. But they came up with David's name. Selection committee chairman Ramakant Desai was too mild a man to say anything to anybody. Tendulkar was shocked. I remember him asking me: 'Who's this Noel David?' He sent me another fax and insisted on us sending Arothe or Kanwaljit, certainly not David. But still David was flown in." Kanwaljit Singh told Outlook: "The whole thing is still a mystery to me, and yes, I do believe I was wronged by the selectors".

Former Hyderabad Cricket Association (HCA) secretary P.R. Mansingh feels that there could be some truth to Pratap's claims: "Things like this have been going on for a while in Hyderabad and the story goes that there are different rates for different teams—starting from Rs 15,000 to get into the under-15 team to say Rs 50,000 for the Ranji team." Of course, payments may win berths in squads but don't guarantee a place in the playing eleven.As a result, points out Mansingh, there's a vast turnover of players in Hyderabad's junior teams. It's almost a norm now to replace five to six players after every two matches in under-17 and 19 tournaments. These replacements often have nothing to do with performance. Who was the selector involved in the Vanka Pratap case? Pratap would only say: "I would not like to name him, but everybody in the HCA knows who he is." A couple of days after this, BCCI secretary S.K. Nair suddenly announced that there were no plans to recall Shivlal Yadav from Australia, now the manager of the touring India team. Yadav, an ex-Hyderabad and India off-spinner, was a member of the selection committee in the late 1990s.

Of course, the HCA denies Pratap's charges. "He's trying to drag everyone because he's unhappy about losing his place in the team," says HCA president M. Ranga Reddy. It's the same in UP. Says Gopal Sharma, one of the two selectors Ritesh Yadav is accusing of asking for money: "We have decided to file a defamation case against Ritesh Yadav and his father. I don't even recollect Ritesh as a player; the boy hadn't even represented any small-level team from Kanpur. But I do remember his father approaching me through common friends to have his son in the team." Agrees Sharma's co-accused Shashikant Khandekar: "I am sorry that the father-son duo has compelled me to call them frauds. According to the records maintained by the Kanpur Cricket Association, Ritesh has played only 10 matches and scored 150 runs. I'm writing to Dalmiya with all the details."

Will Dalmiya take any action? After all, he took none when Ritesh Yadav complained to him. In the end, this is how the Kale affair will pan out. D.V. Subbarao, chairman of the Bar Council of India (who, by bizarre coincidence, was the manager of the India team to West Indies which Noel David joined halfway through), has been appointed by the BCCI to probe the matter. He will meet Roy, More and Kale; under the inquiry committee's terms of reference, he cannot meet anyone else. So it's two men's word against one's. How can Subbarao ever reach the truth? He's not even allowed to access telephone records of the men involved, which would establish if Kale (or Kale's mother) called the selectors. He can't even interrogate the lady!

So the report can be expected to be nowhere closer to the truth than the Indian cricket fan is today. And in a few weeks' time, the fan will be absorbed in the Australia series and forget about the latest scam to taint Indian cricket.

The Kale Affair will stay unresolved. His suspension will be revoked, but he will sadly be forever stained. He will never make the Indian team, perhaps even the Maharashtra team, since he has filed a suit against both the BCCI and the Maharashtra Cricket Association. But More and Roy, whose allegations will stay unproven, have nothing to lose. They will keep their jobs.

And the rest of us will continue to wonder what happened to the talent that selectors once saw in Sanjay Bangar. And why have the likes of Ajay Ratra been ignored? Or what else does a Murali Kartik need to do to make it to the team?

Meanwhile, speaking on condition of anonymity, a BCCI vice-president tells Outlook: "If more players start making statements tarnishing the image of the board and its affiliated associations, we may be forced to reconsider the proposal to hike players' match fees from the current Rs 12,000 to Rs 36,000 for Ranji matches." The rest, as we should all know by now, will be impeccable silence.

V. Krishnaswamy And Haresh Pandya with Savitri Choudhury in Hyderabad, Sutapa Mukerjee in Lucknow and Manu Joseph in Mumbai