The Truth About Lala

The author has tapped his father's 'unbelievable' memory for this semi-autobiographical work, but it's uneven in its focus. 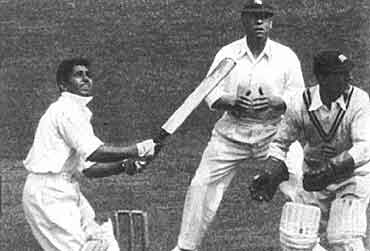 Lala Amarnath: Life And Times—The Making Of A Legend
By Rajender Amarnath
Rupa Rs 395; Pages: 274
In 1947, when skipper Amarnath hit 1,162 runs in 23 innings against Australia, I discovered a hero. But I often wondered why his career saw so many ups and downs, why he was dropped from the team after captaining one series or why he was sent back from the 1936 tour of England.

This book provides most of the answers. Lala Amarnath’s maiden century in a Test match remained his only one. Outspoken to the point of rudeness, Amarnath stood by his principles and so lost out. He played cricket in an age when merit was often superseded by sycophancy. How else can one justify the elevation of a small UP zamindar who had never played first-class cricket to the captaincy of the Indian team to England in 1936? ‘Vizzy’ curried favour with Viceroy Lord Wellingdon and his wife by flattery and expensive gifts. He made incomprehensible bowling and fielding changes, altered the batting order at will and even presented gold coins to the opposition captains to go easy against his team. When Amarnath resented the frequent changes in the batting order he was accused of indiscipline and sent back.

Lala was flooded with gold, silver, cash and Rolex watches after his first century against England in Bombay in 1932. A young girl, the daughter of a jeweller, urged him to elope, using a bag of diamond jewellery as lure. In a Test match against Pakistan, he made two Indian players swear on the national flag that they would not betray their team just to spite him. An efficient manager, he led the Indian team in the controversial tour of Pakistan in 1955 when they were denied basic amenities. But Lahore never forgot its native son, with cab drivers refusing payment from him.

The author has tapped his father’s "unbelievable" memory for this semi-autobiographical work. But there is far too much on the dispute between Lala and bcci president Anthony De Mello. And nothing on why players like Hazare and Adhikari couldn’t get along with him.