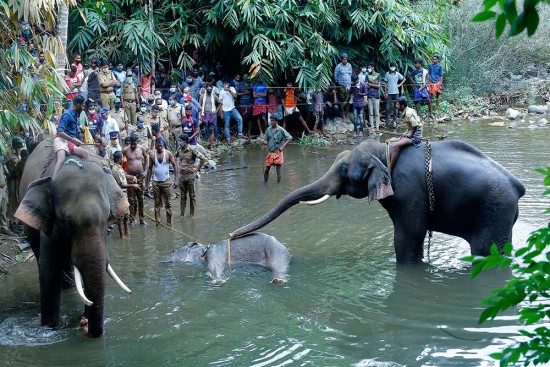 Its imposing bulk, with its pendulous proboscis, is imposing; its capacity to wreak havoc in ancient warfare or if it’s disturbed is terrifying too. But the elephant is an acutely sensitive and gentle animal that follows rigidly atavistic social norms. The whole herd celebrates a newborn calf; when a male reaches reproductive age, it is pushed away from the herd by matriarchs to avoid inbreeding—elephant society is one of the most evolved in nature. Along with its majesticity, it is celebrated as such too—in traditional tales in the Panchatantra and the Jatakas it’s held up as a creature imbued with wisdom; as a rare animal which sheds tears, like us, from emotional distress (elephants experience post-traumatic stress disorder like humans from trauma), it’s perhaps a natural choice for ancient, and modern-day, anthropomorphism. Thus, the outpouring of national grief over the death of a pregnant elephant in Kerala’s Palakkad is natural. Yet, in the same week, two more elephants would have died a death as painful somewhere else in India. According to government data, an average of 102 elephants died unnatural deaths every year between 2014 and 2019.

Consider this: a train mowed down five elephants in Assam’s Hojai in February 2018. That year, seven elephants were electrocuted by a high-tension wire in Odisha’s Dhenkanal. The Wildlife Society of Odisha says about 100 elephants were killed in accidents during 2018-19 in Odisha alone! “Elephants travel hundreds of kilometers through fixed corridors for food. As railway lines, roads, canals, high-tension wires, and quarries disrupt these, what will the stressed animals do?” says WSO’s Biswajit Mohanty. They have little choice but to venture into villages and raid farms, leading to man-animal conflicts. Elephants have killed over 2,300 humans between 2014 and 2019.