The VHP's dharam sansad has resurrected Ram, but will it fetch electoral dividends for the BJP? 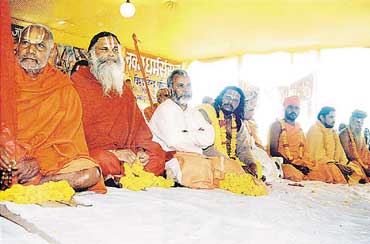 outlookindia.com
-0001-11-30T00:00:00+0553
Though it's hardly a revelation, the discovery of the collaborative efforts—between the vhp, the bjp and the political strategists of the Sangh parivar—in scripting the recent dharam sansad (Ram drama by another name) is a surefire indication that the revivalist family is far from being a spent force when it comes to churning out deceptive illusions and red herrings.

Therefore, when the vhp finally announced a schedule for the construction of Ram mandir at Ayodhya last fortnight—apparently disregarding the bjp's request to the contrary—it, surprisingly, seemed to be making things comfortable for the ruling establishment. The vhp's decree that all impediments towards construction of the temple be removed by March 12, 2002, and the land be handed over to it, and the expiry of the UP assembly around the same time is not a mere coincidence.

The strategy is clear; the agitation for 'mandir nirman' will be the highlight of the bjp's electoral campaign in Uttar Pradesh. There was, however, enough ambiguity in the vhp announcement to give the nda government some breathing space. The organisation had, in fact, backtracked on its earlier promise of announcing an immediate "final" date for mandir construction at the Kumbh dharam sansad. But vhp leaders refuse to concede that political compulsions forced them to stop short of serving a fait accompli to the Union government. Says vhp vice-president Acharya Giriraj Kishore: "If the government falls, let it fall. It is not our government. It is an nda government."

The Sangh parivar is also adamant that there will be no let-up in mobilising public opinion in favour of the mandir. Says vhp working president Ashok Singhal: "It took five years to finally demolish the Babri Masjid. And in the same way, it's important once more to awaken the religious sentiments of Hindus before we start constructing the temple."

Through the year the vhp/Sangh cadre will fan out through the state trying to revive an issue which had faded away from public consciousness in recent years. Singhal reveals that the movement will gather momentum in mid-September this year—almost simultaneously with the high-pitched campaign for the assembly polls. However, this is precisely where the catch lies and the way Singhal plans to conduct the movement could push the bjp's fate in any which direction. His plan is: