The Saving Private Lynch story moved many. Turns out it wasn't for real Updates 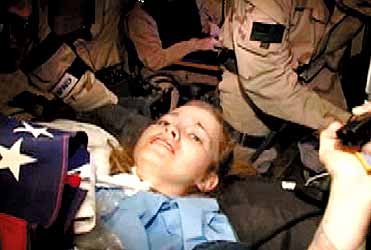 outlookindia.com
-0001-11-30T00:00:00+0553
Nothing emanating from the ashes of Gulf War II compares in drama to the saga of Saving Private Lynch. A young American woman soldier rescued by her mates from the clutches of bloodthirsty Iraqis. There was Ramboesque courage, precision teamwork, acts of mythic selflessness. The Americans loved it.

Only, it’s turned out the script was more make-believe than that of a Hollywood thriller.

As the fog of war fades away, the medical teams and local residents who witnessed the April 1 rescue operation of Jessica Lynch, apprehended by the Iraqis after an ambush at Nassiriyah, are telling a starkly different story. Interviewed separately, the Nassiriyah hospital staff here described the special forces raid as a terrifying incursion into area already under US control.

For Dr Harith al-Houssona, 24, who nurtured Lynch through the worst of her injuries, the whole story of her rescue sounded bizarre. "The most important thing is that the Iraqi soldiers and commanders had left the hospital almost two days earlier," said Dr al-Houssona. "The night they left, a few of the senior medical staff tried to give Jessica back. But when our ambulance got within 300 metres, they began to shoot. There was not even a chance to tell them, ‘We have Jessica. Take her.’"

The next night, sound of helicopter gunships made the hospital staff scurry for the X-ray department—the only part of the hospital with no windows. The power was cut off and a series of small explosions followed as the raiding teams blasted through the locked doors. Then they heard a man shout, "Go! Go! Go!" Seconds later, the door burst open and a red laser light trained on the forehead of the chief resident.

"We were pretty frightened," said Dr Anmar Uday, 24. "Everyone expected the Americans to come that day because the city had fallen. But we didn’t expect them to blast through the doors as in a Hollywood movie." Dr Mudhafer Raazk, 27, observed dryly that two cameramen and a still photographer, also in uniform, accompanied the US teams.

The tension eased once the Americans realised there was no threat. A US medic was led to Lynch’s room; others secured the rest of the three-wing hospital: it was a clinical takeover. Several staff and patients were placed in plastic handcuffs, including, according to Dr al-Houssona, one Iraqi civilian who was already immobilised with several abdominal wounds from an earlier explosion.

One group of soldiers returned to the X-ray room to ask about the bodies of missing American soldiers. They were led to a graveyard opposite the hospital’s south wall. All were dead on arrival, the doctors said. "The whole thing lasted about four hours," said Dr Raazk. "When they left, they turned to us and said ‘Thank you.’ That was it." The Iraqi medical staff fanned out to assess the damage:12 doors were broken, a sterilised operating theatre contaminated, and the specialised traction bed in which Lynch had been placed was inexplicably trashed. "That special bed was the only one like it in the hospital. We gave it to Jessica because she was developing a bed sore," said Dr al-Houssona.

What bothers the doctors most is not what was said about Lynch’s rescue but what wasn’t about her time in the hospital. "We all became friends with her," said Dr al-Houssona. Initial reports indicated Lynch had been shot and stabbed after she had emptied her weapon in a pitched battle when her unit, the US Army’s 507th Ordnance Maintenance Company, was ambushed near Nassiriyah. A few days after her release, Lynch’s father told reporters none of the wounds were battle-related.

The Iraqi doctors are more specific. Dr al-Houssona said the injuries possibly stemmed from a fall from her vehicle. "She was in a pretty bad shape. Compound fractures of the left femur (upper leg) and the right humerus (upper arm). And also a deep laceration on her head," he said.

Nassiriyah’s medical team was under tremendous pressure during those war days. But they all made a point of giving Lynch the best of everything. Despite a scarcity of food, fruit juice and cookies were scavenged for their American guest. Lynch was also assigned the hospital’s most experienced nurse, Khalida Shinah, who, at 43, has three daughters close to Lynch’s age. "I felt more like a mother than a nurse. I told her again and again, Allah would watch over her. And many nights I sang her to sleep," said Shinah.

Dr al-Houssona said, at first, Jessica was very frightened. "Everybody was poking their head in the room to see her and she asked ‘Do they want to hurt me?’ I told her, ‘Of course not. They’re just curious.’ But after a few days, she began to relax. And she really bonded with Shinah. She told me, ‘I’m going to take her back to America with me.’"

Three days before the US raid, Lynch underwent orthopaedic surgery involving a platinum plate implant. "We only had three platinum plates left in our supply and at least 100 Iraqis were in need," said Raazk. "But we gave one to Jessica."

However, the story of Jessica’s rescue may have had an innocent enough start. This was apparent three days after the raid, when a US military doctor visited the hospital. Raazk said, "I told him, ‘You do realise you could have just knocked on the door and we would have wheeled Jessica down to you, don’t you?’ He was shocked to hear the real story. That’s when I realised this rescue probably didn’t happen for propaganda reasons. I think this American army is just such a huge machine, the left hand never knows what the right hand is doing."

What troubles the staff in Nassiriyah most are reports that Lynch was abused in their care. Told of the allegation, nurse Shinah welled up with tears. She then said quietly: "This is a lie. But why ask me? Why don’t you ask Jessica what kind of treatment she received?"

At least two concurrent military investigations are on about the Lynch affair—one to determine how the 507th Company found itself so vulnerable in hostile territory and another to determine what happened to the prisoners during their captivity. "There’s an open investigation to see if they were subjected to war crimes," said Yantis.

It is now believed that several Iraqi sources, and possibly even an Israeli intelligence source, contributed information that led to the much-touted raid on the hospital. The only named source is Mohammed Odeh al-Rehaief, 33, the Iraqi lawyer hailed as a hero for risking his life and limb to alert the US Marines about Lynch’s condition. Al-Rehaief, whose wife worked at the hospital, also alleged he saw Lynch being slapped by a security guard.

The United States granted asylum this week for al-Rehaief, his wife and their five-year-old child. It was announced he had accepted a job with Washington lobbying firm The Livingston Group. In granting asylum on grounds of "humanitarian parole", it appears the US administration expects al-Rehaief not to tell his story anytime soon. "He’s declining all interviews," said Bill Strassberger, spokesperson for the US Bureau of Citizenship and Immigration Services. "He wants to maintain a low profile at this time." Indeed, he has to.