Pulled by realeconomik and pushed by realpolitik, North Block may be forced to balance its act and opt for the middle path 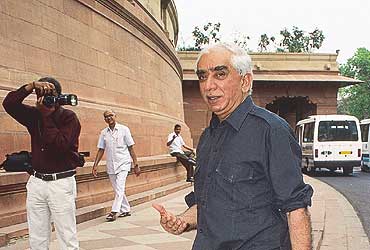 outlookindia.com
-0001-11-30T00:00:00+0553
On the face of it, everyone within the BJP seems gung-ho about the future. The dramatic and clear victory in the Gujarat elections has provided a political stimulus the party badly needed. And, according to the business community, the decisive win will allow Prime Minister A.B. Vajpayee and his deputy L.K. Advani to push through critical reforms initiatives that had been put on the backburner. But read between the lines, analyse the nuances in statements made by BJP leaders and you will notice that the discord between them on economic issues has only increased.

That was probably one reason for the BJP not passing an economic resolution at its recently-concluded national executive. Finance minister Jaswant Singh is already grappling with Budget 2003; he has to balance between the need to take hard decisions and incorporate the pro-middle class demands of ideologue organisations like the RSS. Even disinvestment minister Arun Shourie, who thinks the privatisation process is back on track after serious disagreements between his cabinet colleagues delayed the sale of oil PSUs, is being a bit careful.

Just a few days after the Gujarat victory, he said aluminium PSU NALCO would be sold by the end of next year, after the two oil PSUs' sale. Remember that the biggest critic of the NALCO sale is none other minister for coal and mines Uma Bharati, an important voice of the BJP's Hindutva plank. Therein lies the key. Narendra Modi's political rise in Gujarat has provided a fillip to the pro-Hindutva elements within the BJP and the Sangh parivar. And they are likely to use this opportunity to armtwist the Centre into pursuing pro-people policies.

Nothing epitomises this better than the war of words between the Planning Commission, headed by K.C. Pant, and the finance ministry over the future direction of economic reforms. These differences, which set in a few months ago, are likely to take centrestage after the Modi sweep. In fact, in the last two weeks, the contours of the battle have sharpened considerably. In the commission, Pant has former agriculture minister Som Pal on his side while ministers like George Fernandes, Uma Bharati and Ananth Kumar are supportive of his cause. The RSS and S. Gurumurthy of the Swadeshi Jagaran Manch (SJM) are backing this camp.

The pro-reformers on the FM's side include Shourie and the commission's N.K. Singh, who was earlier in the pmo. While Vajpayee is willing to hardsell liberalisation as the government's major achievement and, therefore, support the reformers, Advani is still unsure about what line to take. While the deputy PM is not keen on giving up reforms totally, he is of late deeply influenced by Joseph Stiglitz's book Liberalisation and Its Discontents, which criticises untramelled privatisation and free markets.

Over the next few months, as Advani's views get concretised, one will witness a lot of friction on issues like disinvestment, policies to woo back the middle class, Budget '03 and decisions to revive stockmarket sentiments. Possibly the fiercest battle will be about what to do in Budget '03. Listen to a senior Sangh functionary, and you might get an idea of the possible confrontation: "We have sacrificed enough for this regime. There is a limit to our tolerance and our ties may well snap if the government continues with its anti-people economic programme." And the sjm has made it clear that if the next budget is anti-people, it will organise mass movements against such policies.

Jaswant is under pressure to listen to such demands, especially when one considers that the Sangh parivar will play a major role in the five assembly elections in 2003. Now that the BJP executive too has taken the decision to fight these elections on the issue of "cultural nationalism" and to repeat the Gujarat experiment in other states, the role of the RSS will be crucial.Even Vajpayee realises the problems, as is clear from his recent comment in Shimla: "There is disagreement in the party and the Sangh over reforms. We need to find a solution."

That will not be easy, if one considers the strong stance taken by Pant and his adversary, Jaswant. Recently, the Planning Commission's deputy chairman wrote a confidential letter to the PM criticising the finance ministry's functioning. While warning about the dire consequences of adopting reforms that were "anti-people", the letter highlighted the dismal economic scenario. In such a climate, asked Pant, what was the point of pursuing reforms that don't address key problems like poverty alleviation or increasing unemployment?

In reply, Jaswant wrote saying there was little room for debate on reforms initiatives. In fact, he seemed clear that the Centre should push for labour reforms, opposed by many within the BJP, and abolish the Public Provident Fund (PPF) for government servants in a phased manner. That's not all. Finance secretary S. Narayanan too got into the act and shot off a six-page missive echoing these sentiments. The note categorically stated that the government can't dislodge its disinvestment programme or move away from the reforms path. It added that fdi can flow in only if there was clarity on reforms being the right way out.

It was actually these disagreements that led Vajpayee to ask Advani to step in to iron out the differences. On December 3, Advani called for a meeting at his residence that was attended by Jaswant, Gurumurthy and BJP president Venkaiah Naidu. This was the same meeting where the decks were cleared for a future cabinet sanction of the sale of two oil PSUs, Hindustan Petroleum Corporation Ltd (HPCL) and Bharat Petroleum Corporation Ltd (B{BPCL). Prior to this meeting, Advani had a surprise visitor at his home. It was N.K. Singh, who had come to brief him about the duel between Pant and the FM. (This was a surprise as NK and Advani were believed to be in opposite camps.)

Unfortunately, the Pant-Jaswant imbroglio continues. In the run-up to Budget '03, one expects heated debates about the liberal recommendations on taxation made by the Kelkar Committee, labour reforms and interest rate cuts on small savings. All three are quite sensitive as Kelkar has asked for abolishing all incentives and concessions for both individual and corporate taxpayers, any change in labour policies could anger the BJP's trade union Bharatiya Mazdoor Sangh, and interest cuts could adversely affect the middle class.

Already, there are reports that the Kelkar recommendations will be toned down quite a bit. Officially, a panel has been set up under ex-UP chief minister Rajnath Singh, to look into its key findings. BJP sources say Rajnath and fellow panel members V.K. Malhotra and the party's economic advisor Jagadish Shettigar have torn apart the Kelkar report". It is the recipe for electoral disaster. Reforms do not mean adding to the misery of the middle class, our traditional votebank," says a member of the panel.

Such opposition is good news for Indian corporates, which too were unhappy with Kelkar's proposals. They now hope the government will take "a more pragmatic approach" on the report. Obviously, as a senior economist in one of the industry associations, says, "The government will follow a market-oriented economic agenda with a Hindu face. In that, the fingerprints would be seen in next year's budget." But in the same breath, the economist hopes all future reforms won't be put on hold: "The government should realise that while Hindutva provides votes, it can't create jobs or bring growth." Adds Rushabh Seth, portfolio manager, ask Raymond James, "The government must ensure its announcements are taken to their logical conclusion."

One area where the private sector thinks the government should not back off at all is the ongoing disinvestment process. Now that the impasse on the oil PSUs's sale has been resolved, Shourie and his team should be able to go ahead with their plans. But there are snags here too. In the near future, the Cabinet Committee on Disinvestment will seek to clarify issues like whether other PSUs can bid for the strategic sale of HPCL, and whether the government should sell a 26 per cent stake, as proposed by Shourie, or 20-23 per cent, as demanded by the petroleum minister Ram Naik, in HPCL.

At the same time, there will be opposition to Shourie's plans from other ministers like Bharati. Given the election fervour that will grip all political parties through 2003, one is not too sure of what the disinvestment ministry can actually achieve. A few sections in the BJP compare the current debate with the one that divided the Congress after it lost the last state elections in Andhra Pradesh. "Even the Congress, which initiated liberalisation, was forced to introspect its pitfalls the moment it faced poll drubbings," says a BJP functionary. In fact, Congress leaders settled on "a middle path", as is reflected by its current opposition to the NDA's liberal policies.

If such statements signify the current mood among most BJP leaders, the Vajpayee-Jaswant-Shourie trio has its task cut out. Apart from problems with the coming budget and the sell-off process, they will need to take measures to restore confidence among investors and revive market sentiments. At present, small investors are clearly shying away from the markets and even big ones like foreign institutional investors have been net sellers. The Sensex has moved within a band with no significant upward or downward movements.

Now that the Joint Parliamentary Committee (JPC on the Ketan Parekh scam has given its report, it's up to the finance ministry to implement some of its key recommendations. At the same time, Jaswant has to do something about revamping the various schemes of Unit Trust of India (UTI), where the middle class lost huge sums. Finally, there are systemic problems with financial institutions like IDBI and IFCI that need to be solved. All this will require bailout packages that will be difficult given the state of the country's finances.

So, what can one expect in the near future, say the next 8-10 months? To begin with, the Kelkar recommendations will be implemented partially, and some of the existing tax-saving incentives will continue. For example, the tax benefits of investments in the housing sector and higher interest rate on PPF are likely to continue. Two, Shourie may go ahead with the sale of two oil PSUs, albeit in fits and starts. He will have to give in on a few issues. Also, there will be a few boosters for the stockmarkets in next year's budget. Finally, expect high political tensions, verbal wars, and hectic lobbying to influence economic decisions.