With less and less to go around, India's urbania will not be spared 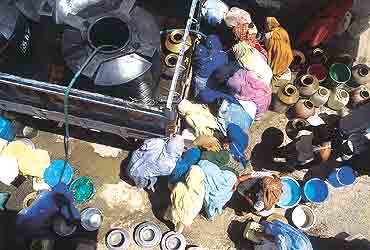 outlookindia.com
-0001-11-30T00:00:00+0553
Drought is often dismissed as nature's curse on the poor of rural India. But with the water crisis threatening towns and cities now, this "terrible fatedness" seems to have shifted terrain. There's no doubt that it's going to be a dry and parched summer for many parts of urban India this year.

In Delhi, chief minister Sheila Dixit says she's helpless; she told citizens to conserve water since "there is no remedy for the shortage". It's a difficult dilemma for her. Even in normal times, the Delhi Jal Board can supply only 660 million gallons per day (mgd)—when the demand is over 820 mgd. And with the Met warning of a poor monsoon and Haryana closing the upper Ganga canal for maintenance, there's no doubt the capital is in for a waterless summer.

Three successive years of poor monsoons and shoddy water management have compounded the crisis. While cities and towns are getting overcrowded because of migration, few water conservation and rain harvesting programmes have been initiated. Says Vijay Paranjpe of Pune-based NGO Gomukh: "It's not just a question of scarcity. There have to be provisions to trap and conserve water in the good years to tide over the lean ones. Hardly any government money goes into decentralised conservation projects. To make things worse, the states have been sinking borewells and groundwater is fast depleting."

In Chennai, attuned to acute water shortages, the situation is particularly grim. By the state government's own admission, "Tamil Nadu has exhausted its entire surface water and much of the groundwater potential." Current availability in Chennai's reservoirs is about 45 per cent of total capacity. Chennai Metrowater says combined storage in its reservoirs is 11,196 million gallons, compared to 18,660 million gallons in April last year. The state has demanded Rs 54.7 crore from the Centre to provide water for Chennai. But as is evident, it's a gigantic crisis.

The story is the same in neighbouring AP, into its fifth successive drought. Hyderabad and other towns are short of water. But in rural Andhra, it's a ceaseless tragedy: barren land, thirsty people, debt traps and suicides.

Though the worst of the summer is yet to come, bloodletting over water has already begun in MP. A violent clash between two groups near Bhopal on April 19 left one dead and four injured. Of the 336 cities and towns here, 135 do not have daily water supply. In Dhar, taps run only once in four days. In Namli in Ratlam district, once every six days. In 92 towns, water is being provided through tankers. This summer, the government will be spending Rs 28 crore on transporting water. Even in Bhopal, water is scarce. The city's municipal corporation has special squads to apprehend people using municipal water to wash their vehicles. Use of potable water for construction has also been banned.

In Mumbai, the municipal corporation has announced a 10 per cent water cut. Water levels in the two lakes that supply the city are down due to the poor rains. The city gets 2,950 million litres per day; it needs 3,950 million litres. In suburbs like Mira-Bhayender, water riots have broken out as supply is restricted to 20 minutes per day.

Much of Mumbai's water is consumed in upmarket areas. South Mumbai receives 300-400 litres per person per day. In the slums and lower middle-class tenements, per capita consumption is abysmally low: 40 litres. This is still far better than in rural Maharashtra where 20 litres of water per person is all the government can promise.

Gujarat is perennially parched. The municipal corporations of Vadodara and Ahmedabad are contemplating supply cuts. Sixty towns in Saurashtra and Kutch face acute water shortage. None of the cities in Saurashtra, except Rajkot which gets Narmada water, have daily water supply.Jamnagar gets water three days a week, Bhavnagar five. The smaller towns are worse off. Surendranagar is supplied water once a week, Wadhwan and Amreli once in five days.

Providing drinking water will be a life and death test for these governments this summer. And if the monsoon fails, it's apocalypse now.