History alchemised by poetry, the Sufi entwined with the sensuous. Inside Malik Muhammad Jayasi's 'Padmavat'. 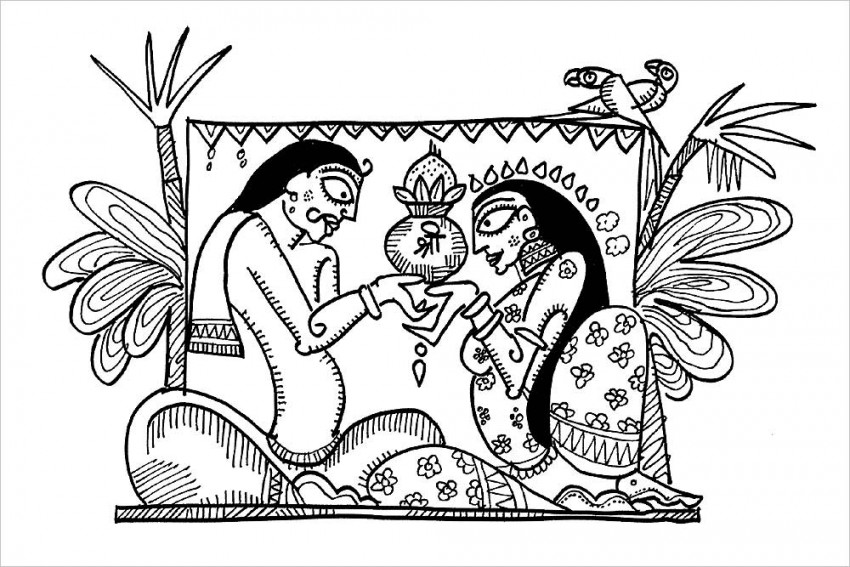 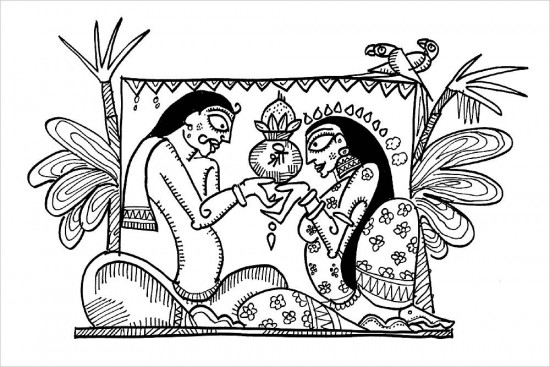 Having praised God, the Prophet of ­Isl­am­ and his companions, and then the ruler of the times, followed by his own spiritual preceptor—Sheikh Mahadi—Jayasi comes to himself before embarking upon the story of Padmini of Simhal. Thro­u­ghout Padmavat, the poet describes everything (from culinary feasts to horses) in great detail, in long shots as well as in close-ups, as if insistently saying that even if he has been deprived of sight in one eye, his ‘eye for detail’ and ‘vision’—in other words, his ability to put details in ­perspective—more than make up for his physical handicap.

The poet goes on to compare himself with other great achievers who, with their ‘deformities’, have made a unique place for themselves. In this stanza, the audience gets an early hint of his vast knowledge of systematic, academic knowledge (Shastras) as well as folk wisdom: “[The] moon has been created by the Creator with its spots,” says the poet, “and it gives pleasing light to the world.” Further, “So what, if I am one-eyed? There is after all only one brightest star—Venus—in the firmament…. Mount Sumeru was hit by Lord Shiva’s trident before it turned golden and touched the sky. Unless passed through fire, gold is not purified.”

Jayasi concludes with words of supreme self-confidence: “The poet’s single eye is like a mirror (darpan) and his poetic emotion is free of any ill will, all the beautiful and handsome ones fall at his feet and look forward to words emanating from his mouth.”

In the next stanza, he introduces his Padmavat. The introduction begins with Jayas: “I composed this in the pious city of Jayas. I beseech scholars to ignore my mistakes…. My tongue sings the praises of Ratan and the “matter” (Padmavati; he uses “padarth”, literally “matter”); and thus causes the flow of sweet nectar. One whose words ,carry the heart-pangs of separation is bound to forget everything—hunger, shelter and all. He turns into a mendicant; he lives like a ruby in dust.”

The metaphor conveys Jayasi’s familiarity with folk wisdom, in which the ruby (lal or manikya) is valued even more than a diamond in certain contexts. A worthy man is the ‘lal’ of the family or community; a mother calls her beloved son or daughter, ‘My lal’. By comparing himself to a ruby and hinting at his own ‘heart-pangs of separation’, Jayasi underlines his own sense of self-worth. It is due to the mix of pain and pleasure of personal memories that Jayas—the first garden (“aadi udyaanu”) of his first work, Aakhiri Kalaam—has become a holy place, a pious city. He concludes with moving words about carrying the pain of bodily deformities along with self-confidence, quite suitable for a ruby in dust: “Muhammad—poet of love, ugly and frail, causes laughters and jeers/ But hearing his verses, nobody can hold back tears.”

Padmini—in the Indian thinking on Kama, erotic desire—is the name given to the ultimate ideal of feminine beauty. Padmini is, in fact, an actualisation of the ultimate male fantasy of feminine beauty and grace. Incidentally, not all are female, there are male prototypes too in Kama literature. Padmini could be a name given to a particular person, but in most of the cases, ‘Padmini’ is a generic term which can refer to any woman who meets the criteria. In many folk tales of north India, not only blue-blooded royals, but even ordinary young men sometimes undertake the adventure of looking for ‘a’ Padmini for themselves.

Just as Padmini represents the ideal of feminine beauty, grace and charm, Simhal Dweep (the island of Simhal) is the ideal of natural beauty and civic life. There is no ugliness of any kind there. All women and men are beautiful not only in bodily appearance but also in mind and soul. Jayasi yearned for beauty and serenity in real life, which was difficult to attain. We can understand his choice of Simhal—the ultimate manifestation of serene beauty—as the place wherefrom his story was to begin.

As we have already seen, from Chittor till Odisha, a traveller to Simhal is journeying within India’s ‘real’ geography (with towns that still exist, and Jharkhand and Telangana coming in for a mention), but beyond Odisha, the movement is through mythical and imagined seas and towards a fabulous utopia….

Such a narrative does not exhaust the possibility of other visions. Somebody can plan to travel to Simhal not to get a Padmini, but with the hope of finding perfection in the form of Ram Himself. And to such a person, Kabir—the master of spirituality beyond religion, who teaches the technique of finding Ram within—has some advice to offer: “If only you strive to know and feel, He resides within, there is no need to head towards Sinhala dweep in search of Ram.”

There are many folk tales in which a young man (generally a prince, but not always) is challenged (usually by a careless sister-in-law or stepmother) to go and get the padmini nari i.e. ideal woman from Simhal island if he is not satisfied with the quality or quantity of meal provided to him (just like in Padmavat). Note the importance of the quality of the meal as a cause of discord. A padmini woman is supposed to be the epitome of perfection in that department as well. The male fantasy of her perfection is not confined to expertise in erotica; it values good food as well. Jayasi seems to have been a food enthusiast himself—he tends to give long-winded descriptions of feasts, exhibiting his knowledge of food culture. He particularly spends a lot of time describing the variety of cuisines at the feast organised by Ratansen for Alauddin.

Jayasi describes Simhal with great passion. At the outset, he hints at a twilight zone of ‘rea­lity’ and fantasy. Simhal, according to Jayasi, is “indescribable, as it is like a mirror which shows you only what you actually look like”. It is also incomparable with any known island or continent, including Jambudweep i.e. the Indian subcontinent. As if anticipating that some rea­ders might confuse his Simhal with Sri Lanka, he says with a touch of derision, “Lanka is not even close to its shadow”. 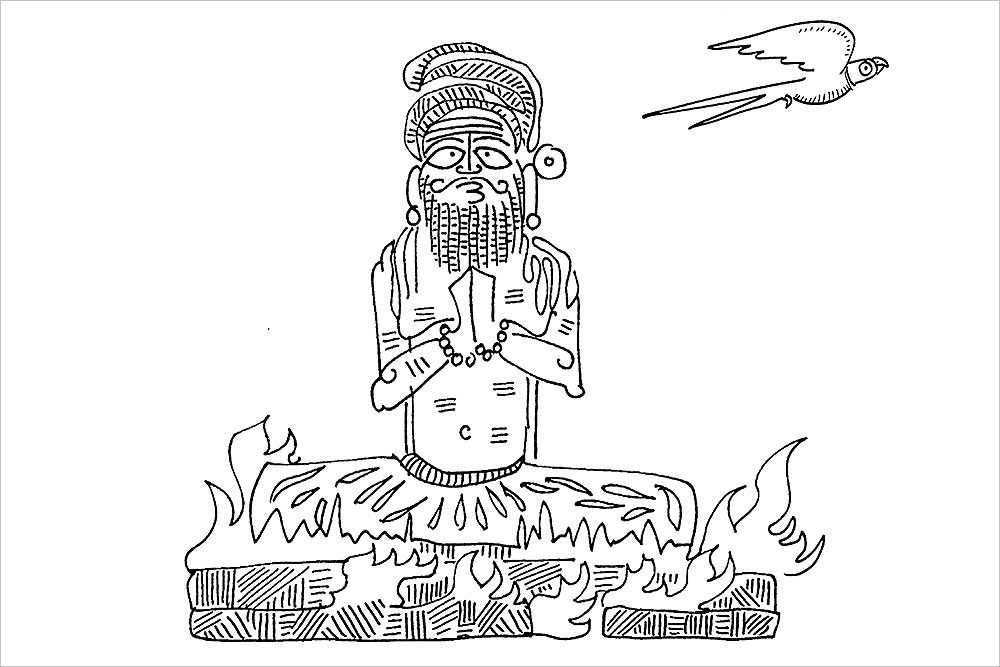 An illustration shows Raja Ratansen on the burning pyre; for Jayasi, sati is not the sole prerogative of women

The couple has been deep in love and has suffered a lot for each other; now is the moment of consummation. The description of this ‘moment’ and its aftermath runs into forty-two stanzas and is a mini masterpiece in itself....