Hers was the face that launched Steve McCurry's searing photo-comment on Afghanistan. Now, it's a book. 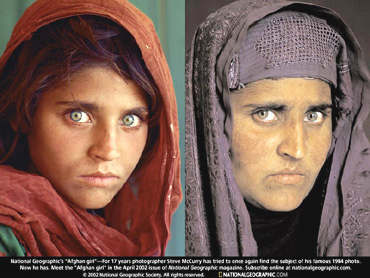 In The Shadow Of Mountains
By Steve McCurry
Phaidon

Sharbat Gula is master photographer Steve McCurry's Mona Lisa. Almost everyone has seen her picture somewhere, yet few would know her name. Sharbat is the world's best-known 'nameless face'. Her green, piercing eyes engage you with a rare and powerful intensity. The Afghan girl may not be a classic beauty but, like Mona Lisa, there is something about her visage that is riveting, that imprints itself in your mind indelibly and haunts you forever.

It was in 1985 that McCurry's portrait of Sharbat appeared on the cover of National Geographic. Sharbat was barely 13 years old then, living in a refugee camp in Peshawar, Pakistan. McCurry had graduated in photography from Philadelphia University and had headed for India in the late '70s—a decade marked by instability in the subcontinent and hence a fertile ground for the budding photojournalist. Making India his base, McCurry made innumerable trips to Pakistan and Afghanistan, taking pictures for all the major Western dailies and weeklies. Afghanistan was on the boil, with the Soviet Red Army engaged in a fierce battle with the mujahideen. City after city in Afghanistan was turning into rubble under relentless mortar shelling. The refugee camps that were set up along the Afghan-Pakistan border would become McCurry's karmakshetra—where he returned repeatedly over the next two decades, trying to find stories of survival in the midst of destruction, horror and death. 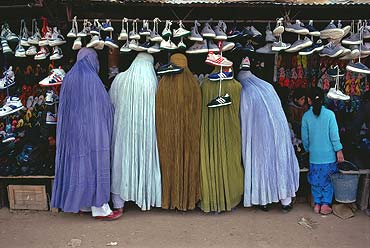 Footwear festoonery: Burqa-clad women at a shoe stall in Kabul. This 1992 photograph is among the 100-odd images featuring in Steve McCurry’s book.

It was on one such trip to the Pak-Afghan border in 1984 that McCurry met his muse. He was at a refugee camp school, where Sharbat was one of the many girls whose picture he shot. Little did he know then that she would capture the world's imagination once her portrait appeared on the cover of National Geographic. Everyone who saw that issue of the magazine was mesmerised by Sharbat's beauty, and the aura around her kept growing with time. In 2002, National Geographic commissioned McCurry to shoot a documentary on Sharbat. 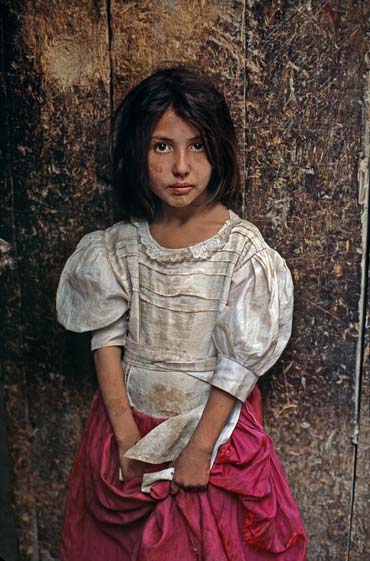 Finding Sharbat after over 17 years wasn't easy. McCurry and his team scoured village after village on the Pak-Afghan border, showing Sharbat's photograph, and encountering in the process many phoney claimants. There was also the strong possibility that Sharbat may have died in the ongoing war. But finally McCurry struck it lucky when a man, claiming to be Sharbat's husband, took the National Geographic team to the village where Sharbat lived. McCurry says he recognised her at once. Though years of hardship, deprivation and drudgery had taken their toll on her beauty, Sharbat's piercing green eyes still retained that rare intensity—it's evident from the picture that one comes across in McCurry's new collection of Afghan images, In the Shadow of Mountains. 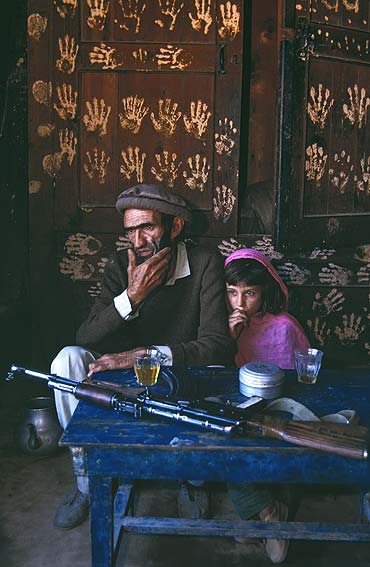 Endless travails: A man with his daughter at their home in Kamdesh, Bashgal Valley, ’92

From over a hundred-odd photographs that the maestro has shot in this handsomely produced book, it is significant that not one of his subjects has even a hint of a smile. This book is McCurry's searing documentation of how decades of violence and suffering have permanently etched Afghan faces with deep melancholy. It's not just the people, though, who bear the scars, they show up even on Afghanistan's magnificent natural beauty—her rugged mountains and green valleys and pastures pitted with shells and landmines, her villages and cities graveyards of debris. The stillness of his compositions is in stark counterpoint to the turmoil and terror that have ravaged the land and its people.

Sample the following images. Kabul 1992: a hawker boy selling snuff, cigarettes and flat bread stacked on his head looks straight into McCurry's lens with an expression that suggests he may just be encountering death down the road. Kandahar 1989: in an expansive landscape littered with war debris, two young boys have made a makeshift shop in a ditch that is actually a bomb crater. ..for the moment, it offers some protection. The young merchants await a customer with their meagre display of oranges, cigarettes and soap. Mazar-e-Sharif 2000: in a dismembered cityscape, relentless conflicts have made the citizen battle-hardened. You make do with whatever is left behind or left intact by the Russians and the Americans. In this photo, a dozen men pack themselves inside a car that serves as public transport while another dozen pile atop.

The pictures make you feel that the clock has stopped ticking in Afghanistan. It is a country that has been pushed back into the middle ages. Her people battle on—not the mujahideen, not the Russians, not even the Americans. They fight their destiny, fight for survival. There is little left to be flattened, little left to be taken away. What remains is the indomitable Afghani pride, the steely resolve that seethes from the eyes of McCurry's portraits—be it of a schoolgirl in Herat or an elderly, bearded bird-seller in Kabul.