The Throne And The Gutter

Why is it that feel-bad reportage makes the reporter feel so good? 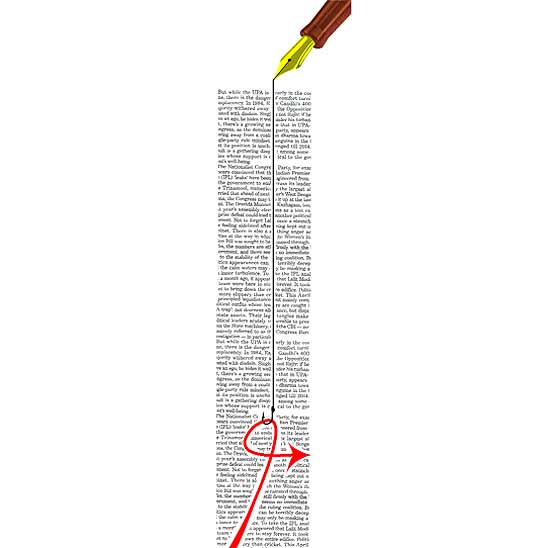 Let me play the devil’s advocate and present a slightly mischievous argument challenging the very basis of this special issue of Outlook. All too often, good news is bad journalism. It’s not very challenging to write about the good; to cover the bad and the ugly is tough. At worst, good news is nothing more than public relations disguised as journalism; at best, easy, flattering writing. As an experienced hack who has been at it for more than two decades, I argue that if we all started writing only about good, inspirational things, we will lose the ability to ask questions, the ability to get to the bottom of the rot around us. In particular, we political reporters could well end up doing puff jobs.

Part of the bad news, in fact, is that far too many journalists do puff jobs anyway. Standards in journalism are dismal and they continue to fall. Instead of challenging power, many journalists seek proximity to power: giving out advisories to authority instead of questioning and scrutinising its actions probably gives them an ego-boost. The way I understand it, a good journalist cultivates good sources but maintains a somewhat adversarial relationship with both politicians and business houses.

As a political correspondent, how do I write adoringly about the wonderful institution our Parliament is when over the last decade I have seen business subvert the system by getting MPs on parliamentary committees to steer policies to serve specific interests? That kind of story is harder to do than writing about young, well-heeled MPs making nice little speeches.

And what of rural reporting? Let’s face it: most of us have already lost the battle to write about the real transformations that have occurred in the countryside. First, mainstream media simply does not give us the space or time to do justice to these themes. Second, if we are at all given the luxury of slumming it in the hinterlands, shouldn’t we use the opportunity to report on the many things going wrong there, the sickening exploitation and the subversion of systems than on the one good guy doing some good out there?

I’m not arguing that good news is no news. In December 1992, after rubble was all that remained of the Babri Masjid and many of us feared that the forces of Hindutva were set to transform the Indian republic, I set off on a journey across India for two years to write on little traditions, shrines and individuals that represented pluralism and synthesis. I was searching for good news in bad times with a missionary zeal and I found it. In my twenties then, I was fortunate to find space in a paper to write a fortnightly column as a freelancer. I still consider that series some of my best work, for many of the traditions I chronicled were completely unknown. But to do that project, I had to leave a steady job.

Within the framework of mainstream journalism, however, I always feel vaguely embarrassed when I write nice things about people. For instance, in May 2008, I wrote a piece on how Nitish Kumar is the consummate method man, setting a development agenda. When the piece came out, I agonised over it being a puff job although subsequent events in Bihar revealed it was a valid story. But it was not particularly challenging to do. I just had to spend some time observing Nitish at work and speak to some talking heads.

If I look back at my innings at Outlook, the stories I am proud of would include the 2004 expose of the sale of the Juhu Centaur by the disinvestment ministry headed by Arun Shourie. It required legwork, speaking to bankers, bureaucrats, and scrutiny of documents; it created a stir in Parliament, the sale had to be re-examined. In 2009, an investigation into the multi-crore sale of Waqf lands culminated in a PIL and the UPA promising a law to change things. Again, it required poring over files in musty Waqf offices.

As a political reporter, we all walk the thin line. In my career, I remember displeasing Atal Behari Vajpayee so much that he asked our editor to remove me from the BJP beat. It goes to the editor’s credit that he did not. I remember feeling under pressure and tense in those days. But when I look back, I get greater satisfaction from having annoyed a prime minister and survived than from the friendly call Nitish made to me after I wrote that nice little story.

We Shall Live In A Pineapple Paisley Garden