The Thread Is Thin

Brahmins here are too few, too middle class to be a political force 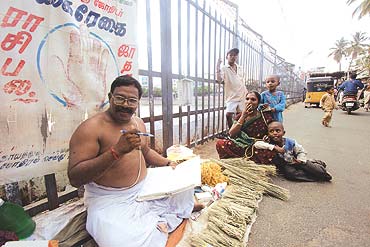 This Forge Is Too Muddy

The Dalit-Brahmin alliance may have fomented well in Uttar Pradesh, but in South India it’s unlikely to create any impact. Still, there’s been some curiosity about the dynamics it may unleash in the country in future elections. The Brahmin community, at least in Tamil Nadu, sees the ‘inclusive’ experiment in UP as an opportunity to shed its ‘historical image’ of being Dalit oppressors.

So is this a "political moment" for the community, when everyone can get past the hate and vitriol generated against the community by Periyar’s fierce anti-Brahmin movement? Can it now turn the tables on the Dravidian parties for neglecting the cause of the Dalits and promoting the feudal middle castes in the last few decades? It’s a pragmatic strategy, although the message itself is communicated in a pathological rhetoric of self-pity.

Sample this agenda for the June 10-11 executive council meeting of the All India Brahmin Federation at Tirupati in Andhra Pradesh. There’s an action plan and the slogans are ‘Last Rites to Untouchability’ and ‘Brahmin’s Hitam (good) at Dalit’s Doorstep’. This when the meeting circular still asserts that "intelligence" is primarily with the Brahmins as also the "responsibility" to save...