The Tang Of Neem Twigs

His is rough and ready wit, and none of it mugged up from antiquated how-tos a la Sidhuisms. They are home-grown, rustic and fulsome as milk from a cow's udders. 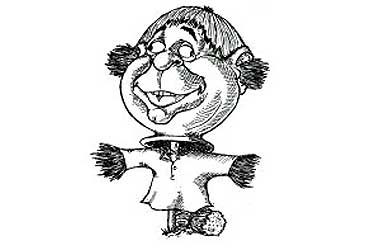 outlookindia.com
-0001-11-30T00:00:00+0553
Alot of what ought to have gone into the telling of the story cannot, alas, be told. They are mostly quite unprintable. Long before they reach the stage of violating public decency, the editors' blue pencils would have overrun them.

And, if by some strange mischance, they do happen to get past the editors' hands, the printing machines would rattle and choke on them. The truth is even Laloo Yadav has learnt to economise on them; most, it is safe to say, are reserved for the high spirits of Holi. But then, Laloo is capable of much more fun than which must necessarily be expurgated. And not all of it is at the cost of Bihar and its benighted people. Before Laloo, Bihar was looted humourlessly by its leaders; Laloo at least makes you laugh while he does it. He has used the one-liner like nobody else has; if there is in our politicaldom such an art as the disarming riposte, Laloo Yadav has it.

You will never find Laloo at a loss for words, not even when he has committed the brazenly indefensible. When he installed Rabri Devi as chief minister before departing for jail under fodder scam charges, a reporter made the mistake of asking him why he had chosen his own wife. "So whose wife should I have chosen, yours?" he retorted and moved on, leaving the stunned reporter fumbling for a follow-up.

Laloo's is rough and ready wit. Unlike Mr Navjot Singh Sidhu, he hasn't mugged it up from antiquated how-tos. They are home-grown, rustic and fulsome as milk from a cow's udders.

Before Laloo went off to South-East Asia on his first and only investment hunt, fancifully garnished stories abounded about how he was preparing himself—lessons in formality and protocol, formal leather shoes and the art of walking in them without tripping, three-piece suits, even silken underwear— they made parodies of a popular film hit and sang Laloo ban gaya gentleman in Laloo-baiting circles. By the time he returned from Singapore, Laloo had had so much of the silken underwear story that at a press conference in Calcutta, he dropped his pyjama bottoms to prove that he was very much the same man within who wore old-fashioned striped underwear with drawstrings and did not mind showing it off.

Laloo was perhaps born an exhibitionist with a taste for show and stage. As a boy at his native Phulwaria in north Bihar, he was in huge demand during festival season. "I was a great mimic and performer and I loved the stage," he once told me. "No village show would be complete without my antics." What his elder brother Gulab Rai told me was that as a boy, Laloo also revelled in the role of a natua, or a boy who performs for an audience dressed as a girl, a cross-dancer if you will.

But there were times he could take exhibitionism and love for adulation too far. As a student leader in Patna during the JP movement, he once vanished from the scene of a demonstration and rang up all newspaper and wire offices in town saying Laloo Yadav had been shot in police firing. That spread like wildfire and Laloo's mates—Nitish Kumar among them—went looking for him from hospital to hospital. They eventually found him bent over a boiling pot of mutton at his elder brother's residence in west Patna. "I just lost interest in the demo," he told his harried friends cheekily, "I ran away because I wanted to cook you all some mutton, look, eat, it smells great."

During the same movement, students of the Patna University had invited several leading politicians, including Morarji Desai, to the campus for a seminar. Laloo was president of the student union and host of the seminar. But instead of staying on the dais and speaking last, he took the lectern first, had his say and vanished. When confronted by union members on his vanishing act, he retorted: "Arrey, am I a fool like you? Who would have listened to me after the likes of Morarji Desai? In any case, any speeches other than my own bore me."

The last assembly election in Bihar was probably Laloo's most challenging; the NDA combine had drastically reduced his Lok Sabha tally just months earlier and he himself was no longer in saddle, Rabri Devi was. One morning during the campaign, I caught him in a rather relaxed mood, chewing a twig of neem between sips of lemon tea in the backyard of his palatial Patna bungalow. I asked him if the battle this time was too uphill and he said: "That is the fun of it, better than going downhill." I asked him if he felt like a bit of a dynast, having installed Rabri Devi, and he said: "I only feel like Laloo Yadav and at the moment I also feel a little constipated which is why this neem and lemon tea." I also asked him if this was going to be his Waterloo and he said: "In Bihar there is no Waterloo, there is only Laloo." Late that same evening, at the end of a hard day on the road, Laloo was pressganged into holding a press conference. He was tired and a bit off-colour and a lady reporter from Delhi mildly complained at the end of it that Laloo had been boring. And so he obliged with a sparkler: "Do you pay me entertainment tax that I should always entertain you?" he shot back. But that didn't quite make copy for the lady and she pressed on with provocation. "Lalooji," she asked, "You have never told us how in the midst of this hectic political life you managed to father nine children...." Laloo, who was already leaving, looked back, stung. Then, he turned full towards the lady and said: "Because you never taught me how not to."

(Sankarshan Thakur is a senior writer with The Indian Express and author of The Making of Laloo, The Unmaking of Bihar)

Gift Of The Gabbers