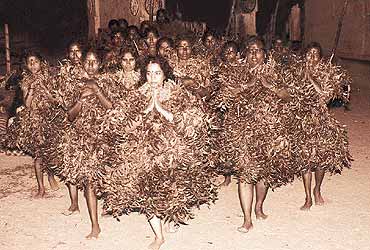 outlookindia.com
-0001-11-30T00:00:00+0553
No political party evokes the fear in the middle class the aiadmk does. When it returned to power, there was jubilation but also a sense of dread. So what explains this Tamil psyche? Why does the middle class in Tamil Nadu fear Jayalalitha while others worship her?

The reasons for the fear are not too difficult to understand. The aiadmk thrives on creating a larger-than-life image for its leaders. It started with MGR; Jayalalitha is the heir. The two used their popularity as film stars to create a veritable cult around themselves, based on personal identification with the leader, sycophancy and absolute allegiance.

Within two days of returning to power, the aiadmk men and women are back to their old habits. An advertisement released in the party organ, Dr Namathu mgr, reads: "Mother of Tamil Nadu/ You are Mahatma Gandhi when it comes to selfless service to the society/You're like Arignar Anna when it comes to converting defeat into success/You're like Puratchi Thalaivar MGR when it comes to criticising the wrongdoers/You're our guide in life and politics."

Another advertisement, released by new mla Valarmathi in the same paper, shows how party functionaries perceive themselves:

"Amma…/We are mere carpets!/But the Golden Throne on which you sit is your own creation/This fruit of victory/Is the product of your sweat/This is a painting/ Created by your imagination/I worship the sand which was blessed by your feet."

Such blatant flattery is not new. The last time around, even ministers indulged in the deification of the leader. Indira Kumari and Madusudanan, two senior ministers in Jayalalitha's cabinet, shamelessly wore only neem leaves around them and rolled in the precincts of temples to bring their leader good luck on her birthday.

There is also the record of aiadmk workers attacking those critical of Amma. T.N. Seshan has experienced this wrath. So has P. Chidambaram. It's not just Jayalalitha who has been the object of such idolatry. MGR, undergoing surgery in the US, had hordes of fans immolating themselves to propitiate the gods and secure his safe return.

So does such behaviour speak of a quirk in the Tamil psyche? Scoffs J. Jayaranjan, director, Institute for Development Alternatives: "I wish other Indians ask the simple question why Rajiv Goswami, a Delhi University student, set himself ablaze before asking me why Tamils immolate themselves. After all, the Mandal Commission's report was to bring about social justice. But the upper-caste media made this victim of caste bigotry a great martyr. Thus, every single act which others point out as quaint Tamil behaviour is actually a universal behaviour from which no society is free."

Adds M.S.S. Pandian, professor at the University of Wisconsin-Madison: "The very desire to search for a Tamil psyche is a desire to spin a stereotype about Tamils. Like any stereotype, this one too will erase internal differences among the Tamils and homogenise them as naturally inclined towards a certain kind of politics. This is in fact not true. Even in the current election, Tamils have voted for different political fronts or chosen not at all to vote." According to him, the search for a Tamil psyche is simultaneously a statement about the middle class' anxiety about its inability to understand politics on the ground. "When their framework of making sense of politics fails to explain actual political outcomes, they take recourse to stereotyping. It is a move to explain away what refuses to get explained and to get a sense of control over the recalcitrant reality of popular politics," says Pandian.

The middle class feels politicians in Delhi have also contributed to Jaya's super-image. Says a resident of Chennai, V. Krishnan, who voted Jayalalitha this time and the dmk in 1996, "National parties made her acceptable to the people. In 1998, it was Vajpayee and Advani who gave her respectability. Sonia endorsed her in 1999 by going to the infamous tea party in Delhi. In 2001, it was the turn of Surjeet, A.B. Bardhan and Deve Gowda. Those who wonder about the Tamil psyche must ask these questions to the national parties rather than blaming Tamils for electing somebody to rule them." That's a new twist to Centre-state relations, then.