There's been a breakthrough and a walkout, all of which could well spell more trouble for Afghanistan 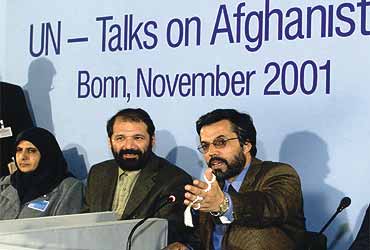 outlookindia.com
-0001-11-30T00:00:00+05:53
We are one nation, one culture, we can really live in an environment of brotherhood and mutual respect." The voice of Sayed Hamid Karzai, Pashtoon leader from south Afghanistan, floated across the plenary hall. He was calling from home, reaching out to his fellow Afghans in Koenigswinter, outside Bonn. Karzai had initially refused to attend the UN-sponsored talks on Afghanistan being held here.

Ahmad Fawzi, spokesman for UN special representative to Afghanistan Lakhdar Brahimi, described it as "a dramatic moment". But questions from journalists and hard reality dissipated Fawzi's enthusiasm. Yes, he said, the UN had arranged Karzai's call. An effort to stimulate the participants.

Fawzi's response shows the extent to which the UN and western countries had to goad the 38 delegates, representing four anti-Taliban groups, into hammering out an agreement. Locked away in Petersburg Castle, a hotel perched on a misty hilltop overlooking the Rhine and inaccessible without a car, the conference managed a breakthrough late Thursday.

It was decided to establish an interim council comprising 42 members to run the country until a traditional assembly of tribal elders, a Loya Jirga, is convened in March. The jirga is then expected to approve a transitional authority and supreme council, which would govern the country for about two years and evolve a constitution ensuring protection of human rights, equal rights for all, education for women and good relations with neighbours.

But Thursday's breakthrough could add to the already existing problems of a country bitterly divided along ethnic lines. To begin with, the arrangement didn't include all the four anti-Taliban factions—the Northern Alliance (NA), former king Zahir Shah or the Rome delegation, the Cyprus group (backed by Iran) and the Peshawar group of Pashtoons supported by Pakistan.

The 42-member interim council that the delegates agreed upon is to have 21 members each from the NA and the Rome delegation, leaving out the Peshawar and Cyprus groups. Though these two smaller formations could be accommodated later, the problem is that even the four delegations in Bonn don't represent all the warring factions and influential commanders. And crisis has already set in. Abdul Haji Qadir, a top Pashtoon leader in the NA delegation has walked out of the conference after bitter disagreements surfaced.

As former US special envoy to Afghanistan Peter Tomsen remarked in exasperation: "I do believe it is time for the UN representatives, Brahimi and Francesc Vendrell, to leave the luxury hotels of Europe and New York and get out to Afghanistan, because what's missing are contacts with the guys with guns.... Most of these expatriates in Bonn and inside this conference don't control any territory or really have any influence in Afghanistan although they are representative of a variety of Afghan groups. The real work remains to be done inside Afghanistan without interference from Pakistan and Iran."

The breakthrough on Thursday was also reached because the UN has been promising billions of dollars for Afghanistan's reconstruction. On the very first day, Fawzi declared that Bonn's outcome would influence the Donors' Conference in Berlin on December 5. And even UN secretary-general Kofi Annan has been indulging in dollar-talk.

Money, however, can't paper over the divide for too long. The fact that the delegates chose to meet in Germany, home to 90,000 Afghan refugees, and not in the NA-controlled Afghanistan, is testimony to the suspicion they harbour about each other's intention. Most came in British planes, under tight security, and were cocooned in the Castle to ensure that hard-nosed journalists don't get a whiff of their disagreement. And to add to all this is the fact that Petersburg Castle has an ominously unimpressive past—it was here British PM Neville Chamberlain had met Hitler to dissuade him from invading Czechoslovakia. That talk, of course, failed. (It's another matter that Formula One driver Michael Schumacher had his wedding reception here).

The echo from the past reverberated in the crucial discussions on the kind of security arrangement Afghanistan must have. On Wednesday, the second day of the conference, NA team leader Yunus Qanooni declared that his delegates were opposed to the idea of an international peacekeeping force in the country. (There are three UN proposals: have an Afghan force or UN peacekeeping force or an international security force.) The others disagreed, claiming their people wouldn't feel safe without them. Dr Anwar-ul-Haq Ahmadi of the Peshawar team, for instance, said his group definitely wants multinational troops.

The UN hand then quickly got into the act: Brahimi had several rounds of meetings with each group and Qanooni showed signs of a climbdown. He declared the following day: "Once a transitional mechanism is established in Afghanistan and if the presence of an international force is required, we will not oppose."

S.K. Lambah, India's special envoy on Afghanistan, who is here in Bonn representing India as an observer, told Outlook: "It is for the people of Afghanistan to decide if they want an international force.... We're here as observers. India and Afghanistan shared a good relationship. We want to revive this."

The other pertinent question still remains: who should head the interim council? Zahir Shah or an NA leader? Most feel Zahir Shah could become the nominal head with the NA exercising the real power. Qanooni said: "Zahir Shah can play an important role in ensuring national integrity." The problem, however, would arise at the time of determining the precise share of each faction in the interim government.

UN, the western diplomats and the media have concertedly built up Zahir Shah, arguing that as an ethnic Pashtoon he could represent the dominant community of his country. But surprisingly, only two out of the eight delegates representing Zahir Shah speak Pashto. They are former foreign minister Hidayat Amin Arsala, whose daughter was recently engaged to Shah's youngest son, and another former minister, Azizullah Wassifi, who hails from Kandahar.

The other six Rome delegates are Persian speakers. In fact, even Zahir Shah, and his ambitious grandson Mustafa Zahir, who is here as a delegate, don't speak Pashto. They are among lakhs of Pashtoons who adopted Dari, the Afghan variant of Persian. His delegation's Pashtoon credentials also wouldn't cut much ice because most members, other than Arsala, have not set foot in Afghanistan for years.

It also appears that Zahir Shah has made an effort to include more non-Pashtoons in his delegation. This is because the former king, who has lived in self-exile in Rome since 1973, is keen to present himself as a unifying force acceptable to all Afghans. His supporters argue that the Pashtoons consider him as one of their own on account of his ethnic origin; the ethnic minorities—the Tajiks, the Uzbeks, and the Hazaras—feel an affinity for him because he speaks their language, Dari.

Ultimately, as Nazif Shahrani of Indiana University, the US, whose family still resides in Afghanistan, says, Bonn's problem is that everyone is grappling with the question: who should govern Afghanistan? "The real question," he says, "is how to come up with a governance structure which avoids the problems of the past, particularly strong central governments monopolising power." Shahrani feels an alternative allowing local communities and provinces autonomy is the answer.

The tendency at Bonn was to think within a western paradigm and even play to the western gallery. For instance, many Afghan watchers feel women delegates were roped into the conference at the West's behest, and do not in any way reflect the current reality of Afghanistan. But the woman delegates (a total of three) were upbeat. As Fatima, daughter of Pashtoon leader Syed Ahmed Gailani, who is one of the advisers to the Peshawar delegation, told Outlook: "Thanks to Laura Bush and Cherie Blair, the world has focused its attention on the plight of Afghan women. For the past five years the children have suffered due to lack of education. It will take a long time to heal the scars."

But even for this Afghanistan needs time and peace.