The Surname Does A Victory Lap

Can perpetuation of privilege and power count as real change? 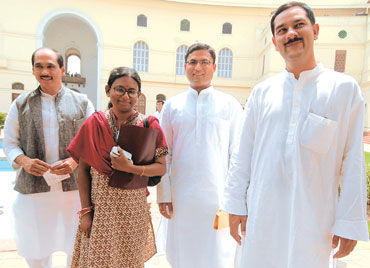 In an ideal world, politics should be about social change; in an age of frenzied media coverage, it is about creating illusions. Hope, change, youth—these are the grand words being used to describe the outcome of Elections 2009. True, the 15th Lok Sabha has 58 first-time MPs under the age of 40, and the average age of Manmohan Singh’s cabinet has fallen from 66 to 57. All this has prompted many—especially the media—to celebrate the rise of youth in Indian politics.

But are we deluding ourselves? Do these youth really represent change, or are they products of a privileged upbringing and upholders of the status quo? Are we seeing the induction of new blood or just blue blood? Is the youth being flaunted just old wine? After all, 25 of the newcomers belong to families that have long been active in politics and monopolised power. That is, besides the established dynasties that now rule from Kashmir to Kanyakumari. At the top of the pile of the "mini" and "major" dynasties are the Gandhis, with crown prince Rahul now being groomed for what many believe will ultimately lead to his coronation in the top job. Sociologist Ashis Nandy puts it quite bluntly: "I see this emphasis on youth and the promotion of children of dynasties as creating the atmospherics for Rahul’s induction."

The young are usually seen as arbiters of change. But dynasts can hardly be expected to bring about radical transformation. Hamdullah Sayeed, the 26-year-old MP from Lakshadweep, is the current pin-up boy of this so-called youth power. He acknowledges that his being the son of the late Congress veteran P.M. Sayeed played a big role in his entry into the political arena. "No doubt, a family name gives one a jumpstart in the initial stages. But ultimately, you have to prove your mettle," says Sayeed, who worked as a lawyer before the easy ride to Parliament from his father’s constituency. But he adds that India is "no longer a kingship". Kalikesh Singh Deo, the bjd MP from Bolangir in Orissa, belongs to the local royal family. He says, "My victory would not have been possible without the people being convinced that I had indeed done some good work for them."

However, voters seem to happily elect children of powerful leaders. In a feudal society, the idea of inherited charisma does work, although subsequent generations rarely match up to the founders of dynasties and fiefdoms. Yet, why does the public continue to vote for them? First, youngsters from such families have a headstart in electoral management. And if the parent is a charismatic figure, then the public will respond to his or her child’s appeal for votes. Nandy elaborates: "I’m afraid we are stuck with this phenomenon for a while. We are not an individualistic society but a community-based society where social mobility is often not dependent on the individual but the family or clan."

Indeed, the process is not just about promoting one’s children but also about protecting interests. Politics now involves the collection and spending of huge sums of money. Leaders consider it prudent to keep it all in the family. Increasingly, only the offspring or spouse is trusted as the guardian of the family fortune. This is one of the main reasons for the proliferation of family rule across the land. In the topsy-turvy world of Indian democracy, socialists, caste leaders and regional satraps have all recast themselves as dynasts in order to guard their own interests.

Veteran journalist Inder Malhotra says he has heard this talk of youth many times in the past. "It comes up in every generation. But look at what happens after the so-called youth are inducted. Both Sanjay Gandhi and Rajiv Gandhi talked of bringing in youth. Sanjay brought in goons and Rajiv brought in Doons," he jokes. Rahul is clearly comfortable with PLUS (people like us), in his case young dynasts born with the silver spoon and a dramatic lineage. Is it a coincidence that the three young ministers from the Congress are all inheritors of a dead parent’s legacy? Jyotiraditya Scindia’s father Madhavrao died in a horrific helicopter crash, Sachin Pilot’s father Rajesh Pilot died in a road accident and Jitin Prasada is the son of Jitendra Prasada, who too died relatively young. These scions could well turn out to be brilliant ministers, but they would never have got the chance were it not for their lineage.

Inder Malhotra, during the course of research for his book on politics in the subcontinent, Dynasties of India and Beyond, discovered there were 100 families in Pakistan whose members were in every legislative body of that country, either by nomination or election. "India is also becoming like that—a few families now dominate the political landscape," he says. He also makes a fine distinction between children joining the professions of their parents and a political leader promoting his offspring over the heads of more capable lieutenants. For instance, much before Indira Gandhi was elected to Parliament, the sons of Sardar Patel, C. Rajagopalachari and Dr Rajendra Prasad were all elected MPs. "But none of them founded dynasties, just as Pandit Nehru did not intend to do so with Indira. But she did indeed put a dynasty in place," he says.

The Communists are one political force who never promote their children. The BJP also does not, although there are now cases of leaders lobbying for tickets for offspring, wives and relatives. Yet, the problem of sycophancy and dynastic rule is not so pervasive in ideology-based parties. BJP leader Arun Jaitley asks, "Is India becoming a dynastic democracy?", and says what has changed is that it is no longer considered an embarrassment in many parties to promote a son or daughter. "It is the legitimacy given to dynasties that I am personally against, although I am not certain about whether public opinion condones or opposes this trend," he says. Jaitley also believes that caste aspirations increasingly get reflected in a personality, hence a Sachin Pilot can claim the mantle of a Gujjar leader, which he has inherited from his late father.

Likewise, some of the young MPs, like Jyoti Mirdha, who was elected from Nagaur, argue that their electorate feels more "secure" with someone from the same family. Her grandfather Nathuram was elected five times from the same constituency. "They wanted to meet Nathuramji’s granddaughter. Even the parties feel more secure in putting forth a candidate with a surname," she says. However, a change has begun, she argues: "This time I asked for votes on my grandfather’s goodwill. Next time, it will be on my name and my work."

And there are also those who have made it on their own. Manick Tagore, elected from Virudhunagar in Tamil Nadu, worked his way up in the Congress ever since he joined the NSUI, its student wing, in 1994. He was apparently "handpicked" by Rahul Gandhi for his good work, but clearly could not have imagined he would win against a heavyweight candidate like MDMK general secretary Vaiko. Amazingly, Vaiko lost to the unknown Tagore, who says contesting without a famous family name—the Tagore in his name comes from his schoolteacher father’s admiration of Rabindranath Tagore—was easy because the party fully backed him. "And it helps you connect better with the party cadres if your background is simple," he says.

Tagore now sees himself as a role model for the Congress. "Hopefully, the next Lok Sabha will have more MPs like me and fewer from political families," he says. He adds that the "greatest demerit" of Indian parties has been the "nomination culture", which he insists must change, for "everybody must have the right to climb". True, but many ordinary folk who strive "to climb" reach nowhere, while children born into privilege sail through with ease. For, the more things change in Indian politics, the more they remain the same.