Villages aren't static. When individuals get to know their rights, the collective gets a move on. 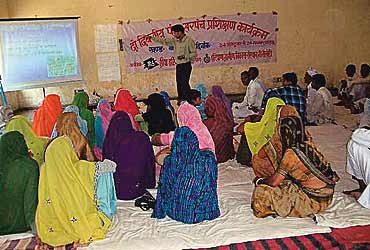 outlookindia.com
-0001-11-30T00:00:00+0553
Some claim the most ostensible change in Mandlana, a village near Narnaul, Haryana, is the frequent sighting of unveiled women. But behind this lies a more significant development as women gradually begin to assert their roles in a society that has for long been, and still is, the fiefdom of men. Take the example of Pushpa Devi, who put her foot down when her extended family urged her to terminate her pregnancy since it was a girl child. A mid-day meal cook at the local government school, Pushpa is now urging the panchayat to give her more utensils so she can function more effectively.

This and more such heart-warming stories have been the result of awareness generated by Pria, a Delhi-based NGO started in 1982 by Rajesh Tandon, an IIT-IIM graduate. The idea was to enhance grassroots participation on governance and development issues. Pria’s mandate focuses on strengthening the individual by making it known what should be rightfully his or hers and encouraging people to hold public representatives accountable if they fail to deliver. This task includes simplifying official legalese and publishing them in brochures, such as the one on the Right to Information Act, and spreading awareness on various issues through community volunteers. The NGO’s intervention has helped 62-year-old Misri Devi file an RTI petition to find out why she’d been missing out on benefits meant for senior citizens and correct that error.

Also, women now know the relevance of gram mahasabha meetings and participate more actively. They use the platform to talk of problems such as the lack of drinking water and raise demands like a vocational training centre. Mothers have begun visiting local government schools where they interact with teachers and inspect the mid-day meal kitchen.

Many of the local women have also formed microcredit groups and found their way through the labyrinthine process of securing a loan. As Pawan Sheokand, a project executive at Pria, puts it, "We offer no solution but merely empower individuals so they find the solutions they need."

Other issues that Pria deals with involve improving urban waste management and campaigning for greater awareness about registering birth and deaths. Besides Haryana, the organisation also works in 11 other states and has just celebrated its 25th anniversary. Its funders include the Ford Foundation, undp, dfid, cordaid and the Panchayati Raj ministry.