Why a police constable was awarded an all-expenses-paid honeymoon in Kerala to a forest department’s decision to christen their tot­emic elephant with a Sanskritised name. Read all this and much more here. 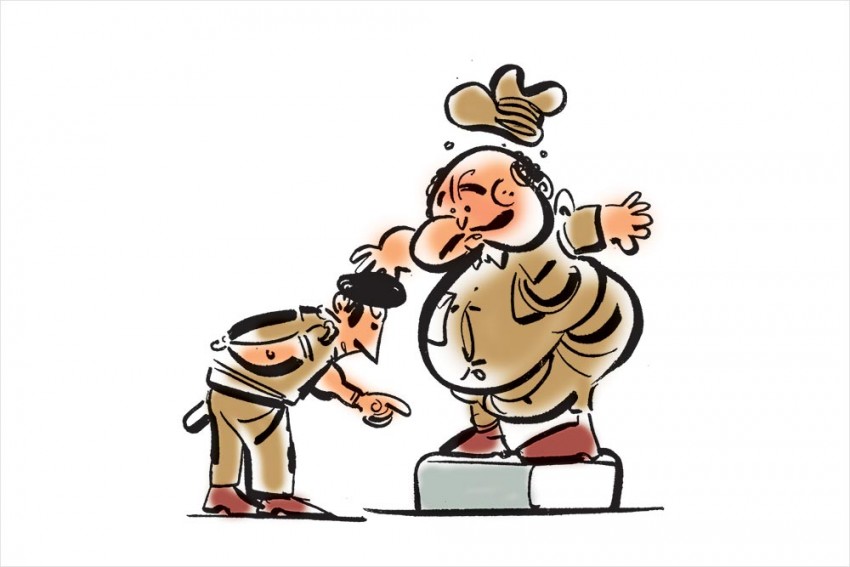 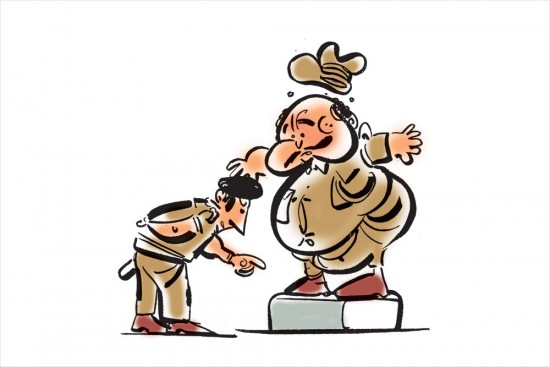 The day will soon come when the police paunch no longer precedes the policeman into the room. The Karnataka State Reserve Police (KSRP) face an ult­imatum: lose weight or lose your jobs.  A circular issued by Bhaskar Rao, additional director-general of police, KSRP, proclaims that all 12 platoon commanders have received instructions to pick out pot-bellied subordinates and subject them to a strict regime of diet and exercise until they attain the svelte ideal. The victims are to start playing sports of their choice and also participate in jogging and swimming. The ADGP was reported as saying that this would ­improve the policemen’s quality of life, as many struggle with health issues and “about 150 policemen aged between 40 and 50 years die every year from lifestyle-related ailments.” 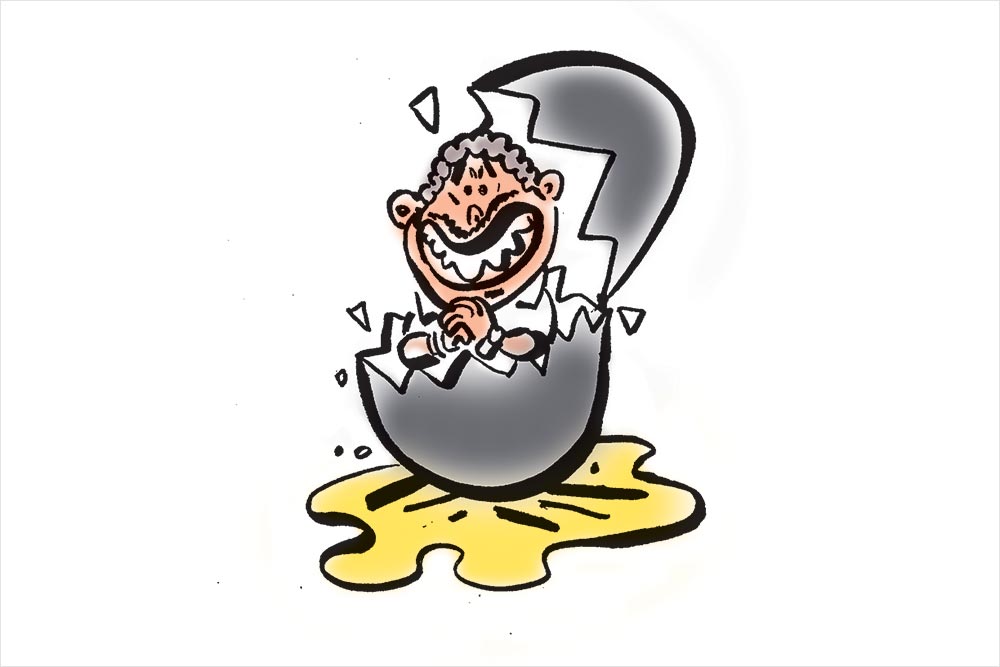 Where Plots Are Hatched

Political parties in Tamil Nadu are under the yolk. Income tax raids have allegedly rev­ealed that Christy Friedgram Industry, a major supplier of eggs and other food items under the state’s Integrated Child Dev­elopment Scheme, was involved in tax evasion, black money and bribing political parties. Officials raided nearly 100 locations in Chennai and Namakkal, and the firm’s owner, T.S. Kumarasamy, is being ques-tioned. The focus is on an alleged Rs 245-crore black money conversion operation, but fallout is widespread, with Tamil Nadu Civil Supplies Corporation managing director M. Sudha Devi having her premises raided due to links with the firm. Her links with two ministers are also being probed. 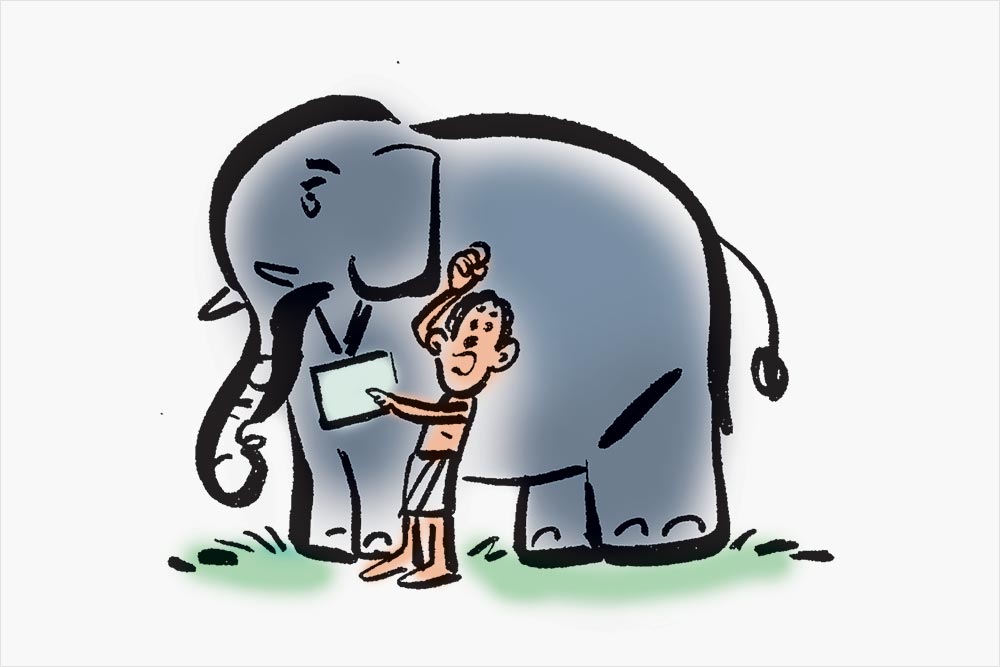 Sanskrit is riding into Att­appadi atop a tusker—and the locals are none too happy. The forest department’s decision to christen their tot­emic elephant, Peelandi, with the Sanskritised name Chandrasekharan, has the Kerala region’s tribal population up in arms. Peelandi was named after a tribal elder of that name, the first of nine people killed by the elephant. The tusker was captured last year and is now at a training camp, but locals—who venerate him as a divine being—want him returned to Attappadi so that his ‘indigenous identity’ can be reclaimed. One elder was quoted as saying, “We will not approve his new name Chandrasekharan, which reflects the upper-caste and feudal mindset of forest officials.” Petitions demanding the return of Peelandi, under his original name, are inundating the office of the CM. 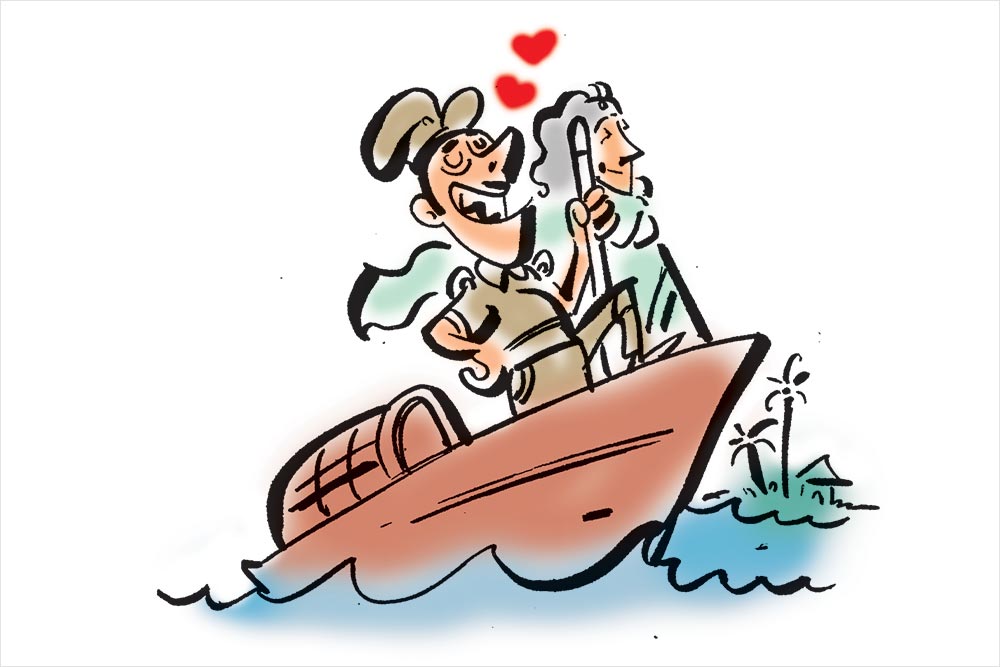 Here’s a genre shift for you: a thrilling motorcycle chase through the streets of Bangalore segues into a romantic sojourn on an Alappuzha houseboat. Police constable K.E. Venkatesh, 31, was awarded an all-expenses-paid honeymoon in Kerala for his heroics in chasing down a phone-snatching pair recently. He was returning to the station around 2.45 am when he saw three men on two motorcycles following another man, threatening him with a knife and making off with his phone. Venkatesh kept on their tail for about 4 km before he collided with one of the vehicles, causing the rider, Arun Dayal (21), to fall. Venkatesh pinned Dayal down and called for backup, while the two on the other bike got away. Senior officers praised the constable’s “presence of mind and courage”. 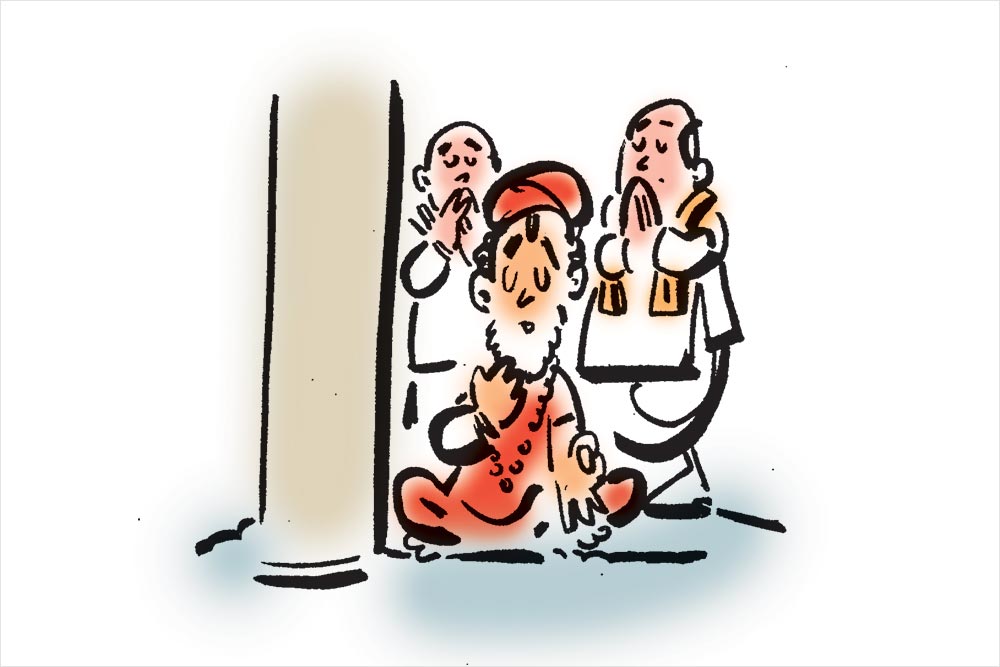 The BJP’s formidable campaign machinery is well known, but the party’s Chhattisgarh wing is said to be reposing its faith in ano­ther pillar.  A pillar painted in vermilion and bedecked in necklaces of odd metal objects, including a bronze idol. A  puja was allegedly performed to ensure that the party would secure a fourth consecutive term in power in the state assembly elections scheduled for the end of the year. All eyes were on the priest, one Ramlal Kashyap, who is also a regional BJP leader and reportedly a regular visitor to the assembly.

Nepal may be a monarchy no longer, but democracy has not wiped out royal fickleness. ­Nepal Sanskrit University’s vice chancellor, Kul Prasad Koirala, was to fly to Canada as leader of a delegation to the World Sanskrit Conference. But at the airport, police told him that prime minister K.P. Oli wanted to see him, and took him to the PM’s residence. He waited before being told that Oli would see him the next day. Koir­ala claims this was a ploy to make him miss his flight, and the event has drawn rancour, while the home minister avers that Koirala had not been authorised to travel.

Glasnost in Pakistan seems to entail dusting off a hidden wife and presenting her to the public. As the general elections approach (peruse our cover story for more), many politicians—top leaders included—are taking transparency to a new level in their nomination papers by revealing second marriages hitherto kept under wraps. The (now) proud husbands include former Punjab chief minister Shehbaz Sharif and his son Hamza Shehbaz, former opposition leader in the National Assembly Syed Khurshid Shah and former railway minister Khawaja Saad Rafique.  The latter was among the first to disclose the information after being put in a ‘tough spot’ during the election’ scrutiny process.

The government’s decision to bring back capital punishment has raised eyebrows in some quarters. But by and large, it has been welcomed by Sri Lankans, as drug-related crimes and murders had been on the rise over the past months.

“Sri Lanka seems to be a very unsafe country at present given that killings are taking place rampantly,” says a rep­ort in Daily Mirror, a Sri Lankan daily, referring to a spate of drug-related killings in the country.

According to the report, President Maithripala Sirisena has instructed prisons reforms minister Thalatha Athukorale to prepare a draft bill to implement the death penalty.

The decision already has the cabinet’s support, and according to other reports it has also been approved by the Buddhist priests of the highly influential Maha Sangha.

The drugs trade in Sri Lanka has a long history, but no previous government took any significant steps to combat it. “We have from time to time heard of powerful ministers having a hand in this illegal trade. Given this past, it’s commendable that this unity government has been bold to slap drug dealers with the death ­penalty in the near future,” observes the Mirror.

It points out that drugs, the ­underworld and contract killings are interwoven. The ministerial hands in this equation made eradicating this culture impossible. But now, there is a growing opinion on the island that the death penalty should also be awarded to rapists and those who indulge in domestic violence that result in deaths.

Clearly exasperated with the rising number of killings, the paper editorialises that, “Sri Lanka harps on being a Buddhist country. But all these unsavoury incidents make the outside world think whether the island’s citizens have understood the fundamentals of Buddhism..” It also raised concerns about whether all the high priests of the Buddhist clergy would approve the government’s decision.

The Mirror declares that while the Buddhist clergy in Sri Lanka have a huge say in implementing such a law, which in a way goes against the Buddha’s teachings and the practice of ahimsa, the patience of “right-thinking people of this country” is running thin.

The newspaper goes on to remind us that many people, concerned about their children’s safety in the wake of the killings, are likely to say yes to the death penalty.