Angry worshippers of a Karnataka's village; hauted Assembly in Rajasthan. Read all the juicy gossip... 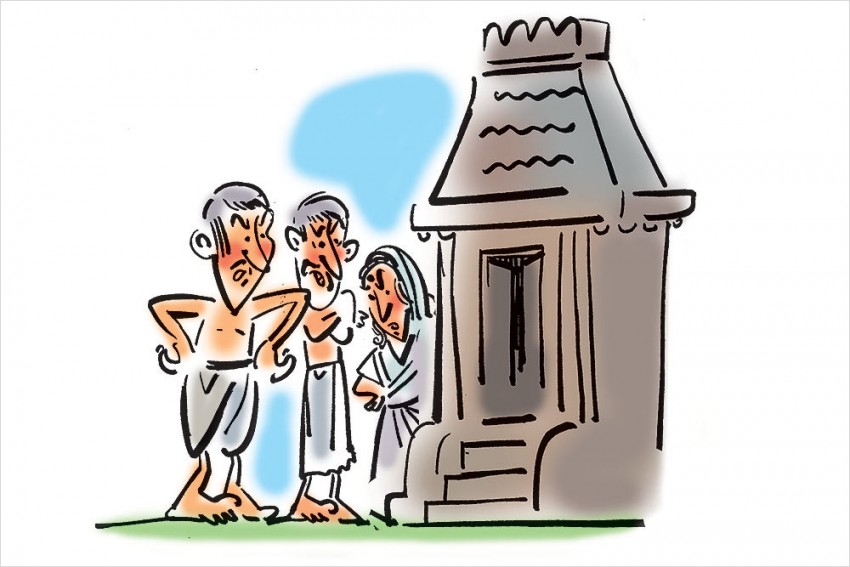 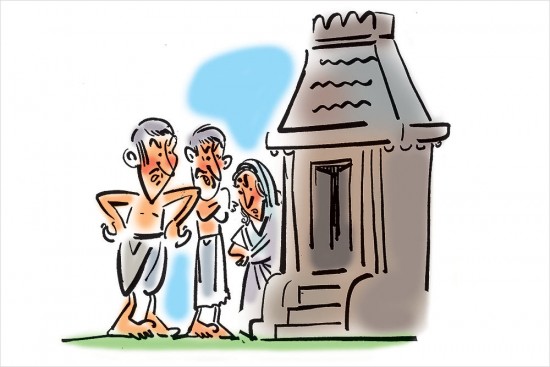 It Tolls For Devi

Deliver the goods or be prepared to step down. That’s the ultimatum residents of Agasaga village in Karnataka’s Belgaum district have given their goddess, Masanakawwa or Masayidevi. There hasn’t been a theft there for decades and the villagers attribute this to the goddess’s powers. The last reported burglary took place 80 years ago when the temple itself was robbed—only for the stolen items to turn up inside it days later. Villagers have traditio­nally left their doors open and kept farming equipment outside. But with the temple bells having been stolen recently, the villagers decided to put Masanakawwa to the test. Locking the priest-less temple’s entrance with an iron chain, they told her that if she fails to retrieve the bells and ‘settle everything’ in nine days, she can’t expect any more worship. 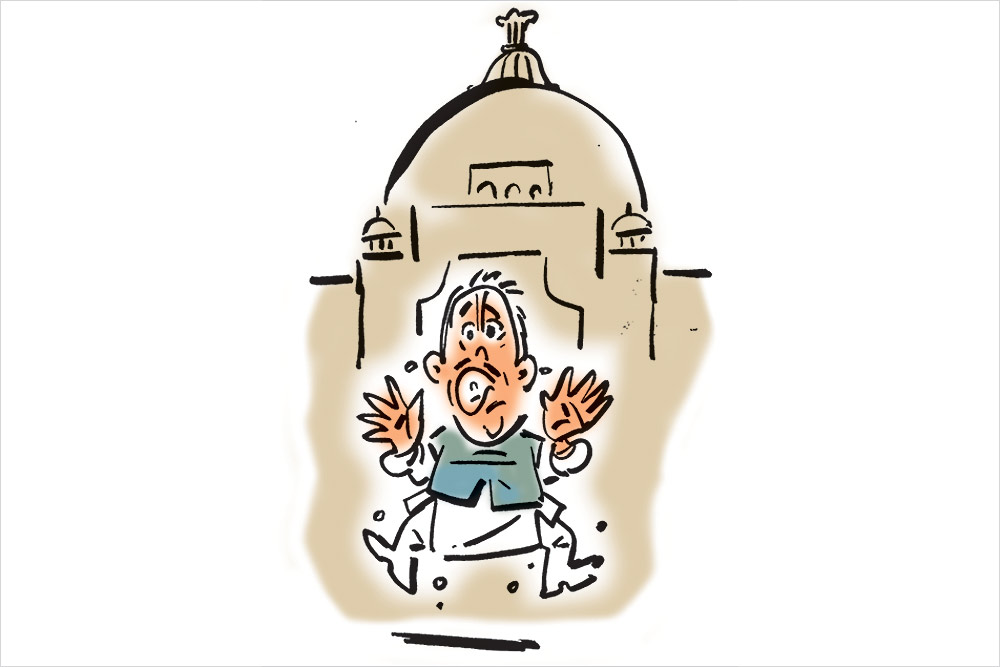 Rajasthan’s MLAs creep along the corridors of power with their hair standing on end. The ­Assembly building in Jaipur, used by the legis­lature since 2001, was built on a cre-mation ground. The idea that it is haunted has been doing the rounds for years, gaining strength with the realisation that there had never been an occasion when all 200 members were present at a time. The deaths of two MLAs (both died in hospital from illnesses) have brought the issue into focus, with BJP MP Habibur Rehman lobbying the chief minister to conduct a puja to exorcise the terrifying spectres. Supporting the idea, chief whip Kalulal Gurjar was reported as saying, “It is possible that children were cremated here and their soul may not be at peace.” Congress MLAs accused him of spreading superstition. 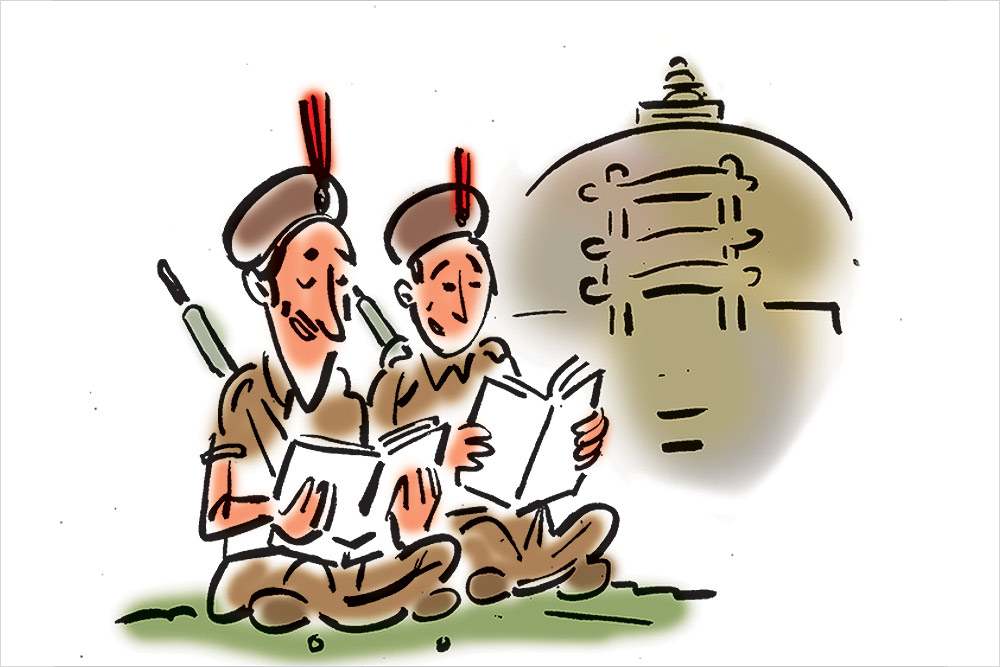 A Mandala For Mandarin

Scholars translated the Buddha’s teachings from Pali into classical Chinese fifteen centuries and more ago. And now, the Sanchi University of Buddhist-Indic Studies in Madhya Pradesh serves as the school of choice for the Indo-Tibetan Border Police (ITBP) in their quest to learn modern Chinese to communicate better with their counterparts across the border. Four ITBP personnel successfully completed a certificate course in Chinese in 2016-17, before returning to their duties, prompting the expansion of the programme; This July, 25 officers and men will enrol for the course. The university is located near the Sanchi Stupa, believed to be built over the relics of the Buddha—a UNESCO world heritage site. 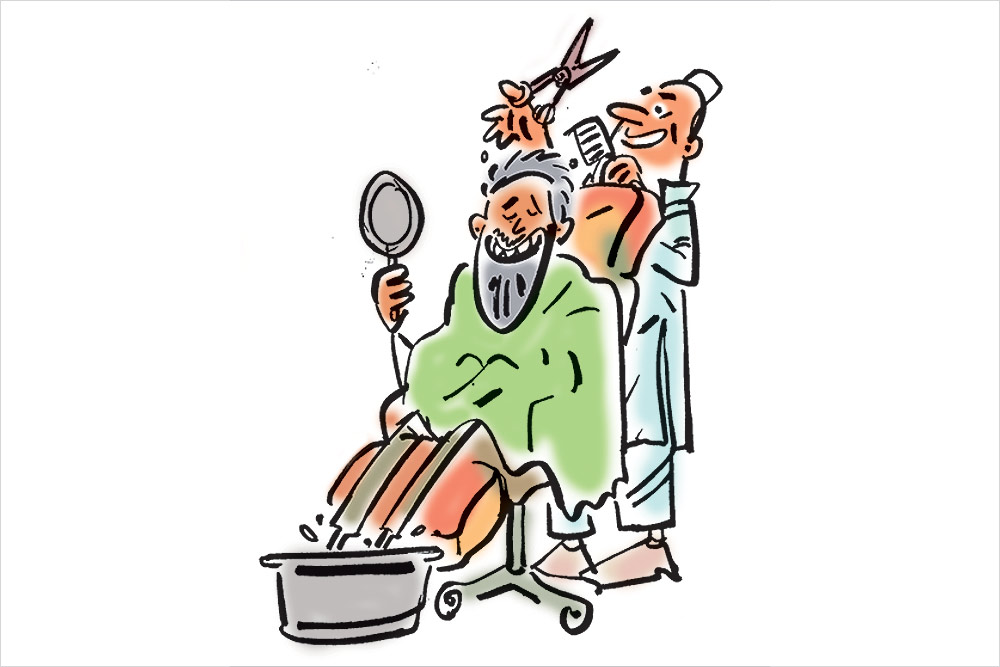 Nowadays, Pakistan’s great and good think nothing of sauntering into a salon—and not the shoot-out kind. More and more male beauty salons are springing up in urban areas. At Tauseeq Haider’s establishment in Islamabad, mandarins and senior citizens alike shell out Rs 1,400 per visit for a grooming session that may include a facial, a massage and manicure. “Men have an equal right to be groomed and times have changed. It’s no more just getting your hair cut,” Haider says. Younger men come too, as a rising middle class with money to spend—GDP per capita rose by nearly seven per cent in 2016-17—strains to break free of traditionally austere notions of manliness and masculine appearance. Social media has played its part in this, with great numbers of people following fashionable ‘influencers’ online. 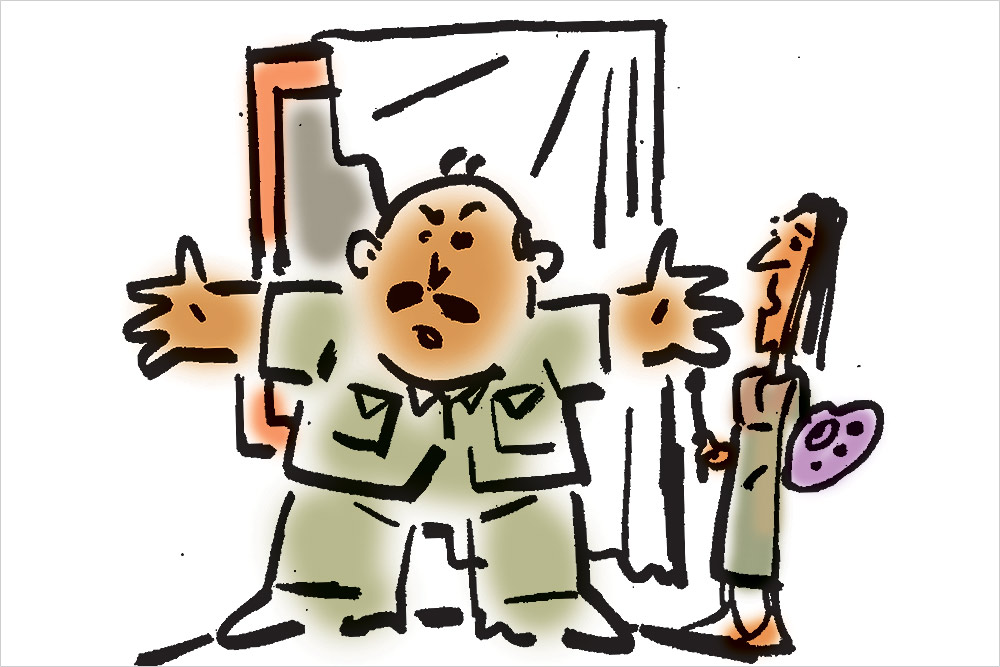 No Mammary At Exhibition

eroticism  and later censo­riousness are han­d­maidens. The Khajuraho temples in Madhya Pradesh make up a millennium-old complex known for its ero­­tic sculptures. So, artist Kalpana Singh may have thought she was on safe ground when she decided to submit her painting of a meditating, bare-breasted woman for an exhibition held in the complex as part of a dance festival. The event’s sponsors called the work ‘objectionable’ and had it taken down. The artist said, “My work was on display... for some time. However, org­anisers suddenly ord­ered its removal, describing it as ‘nude art’.” Thankfully, an American art connoisseur from New York bought the painting for $100.

The ‘premis’ of Prem Kotli love(d) the Dera Sacha Sauda. Making up over 60 per cent of the population of Punjab’s Kotli Khurd village, they lobbied for the village’s name to be changed to Prem Kotli; the revenue depart­ment recorded the new name in August 2016. It’s claimed this was done to honour Ram Rahim’s predecessor, Shah Satnam Singh, who used to visit the village. Now, with the Dera disgraced, some villagers want the old name back. A meeting to discuss this couldn’t proceed bec­ause of the absence of sarpanch Bachint Kaur, accused of being a Dera supporter.

A man looks on, first with complacency and then with dawning bemusement, as his bride drains the whole tumbler of milk that they are meant to share on their wedding night.  And thus, Sri Lankan Tamil cinema announces its rebirth to the world. Komaali Kings is the first Tamil film in 40 years to be made by Lankans in Sri Lanka. Des­cribed as a “dark comedy” by director King Ratnam, the plot is centred on an expatriate family based in London coming home for a wedding. Starring amateur actors and made with the help of a largely Sinhala crew, the film opened in theatres to considerable success, with viewers calling it a step forward in a market dominated by South Indian cinema. In what appears to be another round of confrontation between Pakistan’s ruling party, the Pakistan Muslim League (N) and the judiciary, ousted prime minister Nawaz Sharif was elected as “Qaid” or leader of the PML(N) by its senior leaders for life.

The court had in a recent judgment made it clear that any person who has been disqualified by it on charges of graft and is an MP, cannot head his party. This in effect meant Nawaz virtually be kept out of Pakistan’s politics.

The Dawn reported that PML-N chairman Raja Zafarul Haq proposed Nawaz’s elevation as ‘qaid for life’, saying, “Mian Nawaz Sharif was, is and Inshallah will remain the leader of the PML(N)”.

Endorsing the unanimous decision of the party’s working committee, PM Khaqan Abbasi said: “These are the peoples’ decisions. The courts had no right to take this decision—this is our party’s decision.”

At the start of the meeting, Nawaz, in a reference to the judiciary, asked, “[Do you expect that] you keep on taking oaths under PCO and we’ll continue to respect your decisions?”, ref­erring to those judges who had taken oath under a provisional constitutional order (PCO) issued by former military ruler Pervez Musharraf.

Stripped of his leadership, Nawaz derided the ‘PCO judges’, referring to their oaths taken under a provisional order issued by Musharraf.

“It is the greatest crime when you leave your country’s constitution and take oath of allegiance to a military dictator. What is a bigger crime than this?” he questioned. “The crime for which you have punished Nawaz is not even a hundredth part [in severity] of taking oath over PCO. It is the biggest crime.”

Since his disqualification in the Panama Papers verdict, Nawaz has frequently lashed out at the “PCO judges”, holding them responsible for his ouster.

The emergency measures kicked in after the Supreme Court on February 22 struck off a controversial amendment to the Elections Act, 2017, which had last year paved the way for Nawaz to resume leadership of the party after being disqualified in the Panama Papers case in July 2017.

Interestingly, the SC ruling had rendered null and void all decisions Nawaz Sharif had taken in the capacity of the party chief. This raises a question mark over the legal status of PML-N’s CWC, which has 109 members nominated by Nawaz while he was party president.