The Streets I Call Home 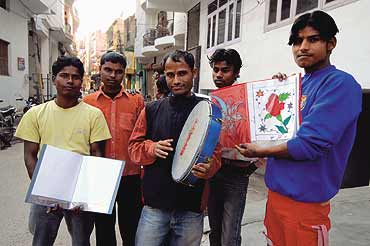 outlookindia.com
-0001-11-30T00:00:00+0553
Prince Charles wouldn’t know this: he was instrumental in bringing together a group of street children to begin a unique movement aimed at their holistic development called Jamghat. During his 2003 visit, 14 street kids were gathered from the Jama Masjid and Hanuman Mandir areas of Delhi by ActionAid to put up a mime performance. The play, highlighting life on the streets, was subsequently performed at several venues like the World Social Forum in Mumbai, at Dilli Haat and various schools and colleges. ActionAid could not support or fund the venture any further, but Jamghat stuck on, backed by young theatre volunteers who had helped stage the play. The kids decided to stay together and gave themselves a name: Jamghat.

Jamghat is like a small hostel that provides food and shelter to street kids but there’s more. It also offers them education and avenues for training in various vocational streams—from fashion designing to car driving. "The idea is to make them self-sufficient and get them back into the mainstream," says Amit Sinha, the prime mover behind the movement.

An NGO that has no regular source of income, it sustains itself through community-based theatre performances. "We use theatre to make people aware of homelessness and the money to sustain Jamghat," says Sinha. Its volunteers also hold workshops with college students and pump the resources back for the welfare of street kids. There are around 200 volunteers, 20 of them regular, who contribute to Jamghat. There is no other source of funding for the group.

About 25 kids have stayed in Jamghat and moved on, most are working but they keep in touch with the group. Right now, six kids are staying in Jamghat and the next group of 15 are being mobilised. Sonu has learnt driving, got a licence and wants a job in a company; Azam designs and stitches clothes. "Everything they need is available here. But this is not life. They have to go out and be on their own," says Sinha.

Jamghat also has an ‘outdoor’ project for street kids. The volunteers visit the Jama Masjid area three days a week for informal counselling sessions with the children. "We meet, talk and try to form relationships. The idea is to not talk down to them but mobilise them towards education and self-sustenance," says Sinha. Jamghat also organises ‘night outs’ where groups are taken out and shown the street life to give them a sense of what it means to live on the streets.