The Street Has The Edge

Markets are by now unaffected by terror's ways. But it extracts a long-term price. 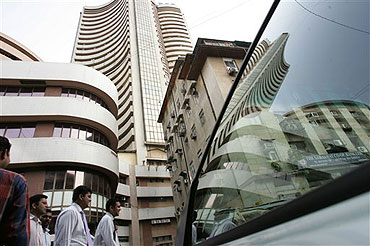 outlookindia.com
-0001-11-30T00:00:00+0553
For the Indian investor, Infosys is clearly way more important than the 200-odd dead in the terror attacks. What Nandan Nilekani says, or indicates, is ever more significant than what the militants do—even if they do Terror Tuesday, hitting 12 targets in less than 12 hours. This fact is clear from the ever-optimistic Sensex which, riding on better-than-expected Infosys Q1 results, zoomed by over 300 points the day after the serial bombings in Mumbai and Kashmir on July 11. It did fall 72 points on Thursday (July 13) though, hinting that it was also sympathetic to the families of those who died, or were injured.

But for India's economic stakeholders, terrorism has become a part of life, albeit an unsavoury one. So it was business as usual on Wednesday (July 12). "The West has understood that such acts have only a transient impact on an economy. This incident gives us an opportunity to show how India turns a crisis into an opportunity," said M&M CEO Anand Mahindra. He was referring to the fact that Mumbai was back on track the next day, with office attendance as high as 70 per cent. Finance minister P. Chidambaram added wryly: "One solitary attack cannot set back economic activity."

Many others were equally confident. "What matters is growth and the visibility of growth. Has this (the Mumbai blasts) affected that? It hasn't," says Tridip Pathak, CIO, Cholamandalam Mutual Fund. Alberto Abadie, an economics professor at Harvard's Kennedy School of Government, believes that terrorist attacks on financial centres can be extremely effective but adds, "If the economic agents interpret this as just another incident in a series of terrorist attacks, the city will not suffer much." Finally, Abheek Barua, chief economist, abn Amro, feels, "Earlier, foreigners used to panic when such attacks happened. I don't think we are now looking at any revision in risk premium related to India."

A common perception is that after the high-profile attacks in the US (9/11), London (7/7) and Bali, global investors and policymakers have become sensitised to terrorism. This is bolstered by the apparent bounce-back in the respective economies—after a temporary negative impact—within months. The US economy did slow down in the third quarter of 2001, according to a 2002 OECD report, "but in the fourth quarter, demand held up better than initially feared, and GDP increased". London was back to normal even faster and, in Bali, the loss of revenues from American and European travellers was more than made up by those from India and China because of the discounted air fares and hotel tariffs.

In case of the stockmarkets too, war and terror seem to have a short-term impact. Here's what happened to the S&P 500, a US index, during critical events in the past 65 years. The index fell over 10 per cent the day Japan attacked Pearl Harbour in 1941, but was up over 15 per cent within three weeks; it dropped nearly 13 per cent on June 23, 1950, at the start of the Korean war but later zoomed 31 per cent over four weeks; during the Cuban missile crisis, it fell nearly 9 per cent but strengthened by over 36 per cent in two months; in 2001, it fell 7 per cent on 9/11, and was up 15 per cent after eight days.

However, there are long-term implications that go unnoticed, and which impact global economies on a sustained basis. An immediate response by most countries is to hike spending on homeland security and military operations. Post 9/11, the US increased its annual defence spending by $48 billion, or a rise of 14 per cent, apart from an additional $18 billion budget—from $20 billion to $38 billion—to boost homeland security. The 2002 OECD study points out that Germany approved an anti-terror package equivalent to 0.1 per cent of GDP and the armed forces in the UK requested an additional 0.7 per cent of GDP to meet the requirements of the war against terrorism. Rough calculations suggest that "an increase in public-military-security spending by 1 per cent of GDP and private security spending by 0. 5 per cent of GDP would reduce output by about 0.7 per cent after five years".

Post-Mumbai blasts, the same seems to be happening in India. Security was beefed up at major airports, railways stations, metros like Delhi and Mumbai. The indications are that the annual budgets for security agencies like the Railway Police Force, state police and intelligence wings will be increased. Sensitive oil PSUs' installations were asked to become more sensitive to threats. BPCL sources say the PSU has deployed sniffer dogs and vehicular patrolling at its Chembur refinery. Adds a source in Mumbai's Air-India building, which was attacked during the 1993 serial bombings, "Apart from the X-ray and baggage checks, we're manually checking all cars approaching our premises."

Without realising it, logistics and transaction costs go up for businesses. Higher security measures generally lead to more time consumed to transport goods across borders, higher inventories to safeguard against possible disruptions and rising insurance and other costs. A 2001 IMF study concluded that a 10 per cent rise in inventories in the US would impose an additional carrying cost of around $7.5 billion a year. A 2003 OECD study estimated that the threat of terrorist attacks had "wiped out around half of the logistics productivity gains realised in the US over the past 10 years". Post 9/11, an ubs Warburg study stated that commercial insurance premiums "could increase by 20 per cent". The worst is the hit growth takes, as the gap between the expected and actual rates widen. In the case of developing ASEAN and Asia-Pacific nations, actual growth can be 1-1.5 per cent lower.

This is possibly why Ramesh Chauhan, CMD, Parle-Bisleri, bemoans: "The overall cost of doing business in Mumbai is skyrocketing, and the city is becoming more insecure." Adds Pooja Shetty, MD, Fame Adlabs, "We have huge investments in Mumbai, but we feel insecure and vulnerable to external negative influences." The final words come from Nouriel Roubini, professor, Stern School of Business, "Since the attacks have occurred at a time of market volatility and in a period when reforms in India may be slowing down, the consequences may be more serious than otherwise."

By Saumya Roy and Shuchi Srivastava