The Strange And Murky Estate Heist

In the midst of the tussle within AIADMK, a break-in at Jayalalitha’s Kodanad retreat leads to much speculation and two suspicious deaths 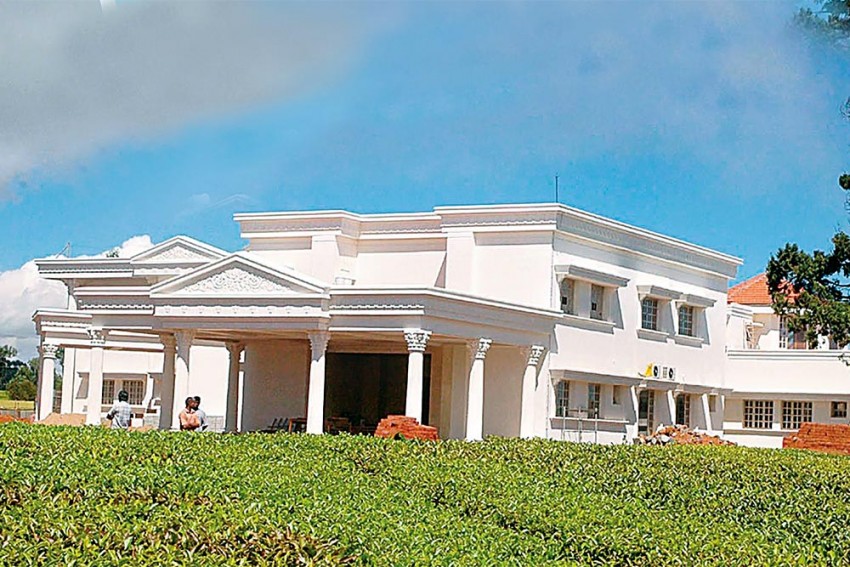 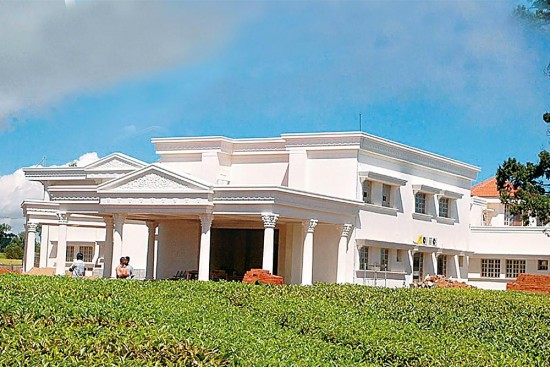 “Fast, furious and fishy.” That would be the title if it was made into a movie. And the storyline runs like this: a powerful political leader dies; her friend tries to usurp the throne, but gets jailed in an old corruption case; the friend’s nephew tries to take the aunt’s place, but a bypoll gets cancelled, stalling his plan, while he gets arrested for attempted bribery.

Now add the crime angle to this. The bungalow in a sprawling estate belonging to the leader and her friend is burgled. One security guard is killed in the process and another badly injured. What the robbers took away from the mansion remains unclear. The leader of the dacoits, according to the police, happens to be a former driver of the friend, who gets killed in a road accident soon after, while an alleged accomplice meets with another road accident that kills his wife and child and grievously injures him.

The people of Tamil Nadu have not had a moment to catch their breath as a most bizarre political crime thriller has been unfolding in a fast-paced blur over the past two weeks. “For people hooked on to conspiracy-filled family dramas and charged up reality shows on television, last week’s events proved to be a combination of both in real life,” observed Tamil writer and part time actor Pa. Krishnan. “This real-life thriller could well be the closest challenger to Baahubali 2.”

Even as T.T.V. Dinakaran was being questioned by the Delhi Police for atte­mpting to bribe Election Commission officials, on the night of April 24-25, a gang (an 11-member one, according to the police) broke into Jayalalitha’s Kodanad Estate in Nilgiris district. They killed one Nepalese watchman and injured another, before entering the White Mansion House bungalow where Jayalalitha and Sasikala used to stay. The gang escaped with the loot in three vehicles.

The police claimed only a few watches and a crystal showpiece were stolen, but a few suitcases were found open and empty. According to a senior police officer, the robbery at a VVIP bungalow could not be for a pittance. “Apparently, they had inside knowledge of what was being stored where and came looking for it. Whether it is cash, jewels or documents, they knew enough to look around only in the private rooms where Jayalalitha and Sasikala used to stay. Only someone aware of the house layout would have proceeded to those two rooms,” says the officer. 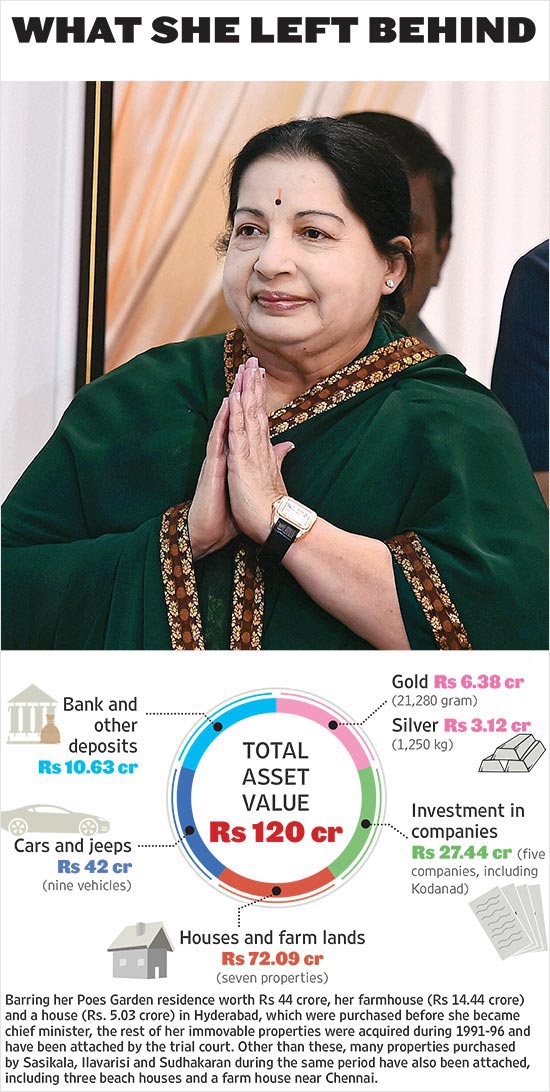 Footage from the CCTV cameras from Kothagiri town had picked up one of the vehicles used by the intruders and the vehicle details helped the police zero in on S. Kanagaraj, who had worked at Kodanad and Chennai’s Poes Garden as Sasikala’s driver until 2012. As the police dug into Kanagaraj’s past, they learnt he was a second cousin of CM E.K. Palaniswami and hailed from the CM’s hometown Edapadi in Salem district. The two families had fallen out after Kanagaraj used his proximity to Sasikala to promote his brother Dhanapal in the party hierarchy in Edapadi, much against the wishes of Palaniswami, who put an end to the challenge by having Dhanapal expelled from the party.

Going by the police version, Kanagaraj worked in a bakery at Coimbatore and hatched the plan to loot the bungalow. He asked Sayan, a fellow worker, to help him find the men he needed for executing the plan. Some of Sayan’s acquaintances from Thrissur in Kerala joined the gang.

There has been some speculation on whether Kanagaraj was acting on his own or taking orders from someone close to the Sasikala family. After Sasikala went to jail, Dinakaran was controlling all the properties that belonged to his aunt and Jayalalitha. “Maybe there were some incriminating documents at Kodanad, which the family did not want to fall into the hands of the Delhi Police. Why else would the burglary happen right after Dinakaran was picked up?” asks an MLA of the rival O. Panneerselvam camp.

The burglary was not the end of it. On the night of April 28, Kanagaraj was killed when his two-wheeler was knocked down by a car on the national highway at Attur in Salem, where he had gone to his sister’s house. Just five hours later, Sayan’s car crashed into a stationary truck near Palakkad in Kerala. His wife and five-year-old daughter were found dead in the car, while Sayan was critically injured and shifted to a Coimbatore hospital, where a magistrate recorded his statement before he was operated for his injuries.

The police theory about Kanagaraj and his gang had sounded a little credible until the two accidents, after which serious doubts were raised on whether the former driver was actually involved. Kanagaraj’s brother Dhanapal refuses to believe that his brother’s death was an accident. He suspects foul play as there were no telltale signs of a collision. “There were no drag marks that are expected in such an accident, nor any blood stains. The driver, who reportedly rammed into the bike, kept contradicting himself. I suspect they are trying to frame my brother,” Dhanapal told reporters in Salem.

Kanagaraj’s wife Kalaivani claims her husband was at their Chennai home on the night of the burglary and, if the police suspected him, they could have questioned him anytime in the two days before he reached Edapadi on April 27. “But no one came looking for him,” she recalls. 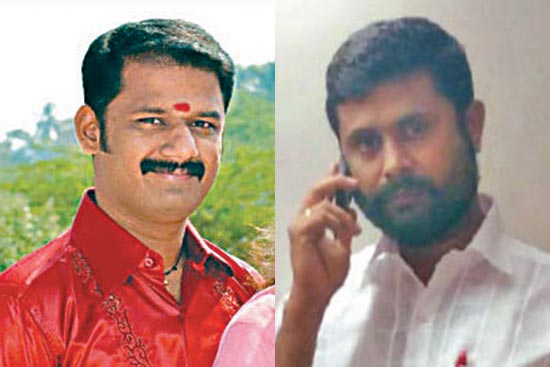 The speed with which the police tried to paint it as a petty theft added to the suspicion whether Kanagaraj and Sayan were the fall guys. The Nilgiris district SP Murali Rambha’s statement that only a few watches and a decorative crystal piece were found missing came curiously before the inventory of articles from the two rooms had been prepared. “Since the mansion was locked and no servants had access, how did the SP know about the missing items unless he was making a wild guess?” asks an AIADMK lawyer.

The watches the police displayed turned out to be cheap ones that had Jayalalitha’s photo embossed on the dial—the kind distributed to party functionaries. “One can find such watches in the house of an AIADMK district secretary, not in Jayalalitha’s personal quarters,” says a party senior.

The police continued to perplex those wanting to get to the bottom of the burglary and the two accidents that had resulted in the loss of four lives. State police chief T.K. Rajendran turned down the demand for a Crime Branch-CID probe. As DMK’s Stalin had recently carped at central agencies for selectively targeting AIADMK leaders and ministers, Rajendran wanted the police probe to be supervised by the home secretary, as if that would help prevent a cover-up. The two police officers heading the probe kept harping on there being 11 people involved in the burglary, of whom six have been arrested, one was dead and the other was in hospital, leaving three more to be nabbed. “How can they be sure no one else is involved?” asks an AIADMK MLA.

Leaders from the Panneerselvam group say there is need for a CBI probe as the police are bound to be under some pressure from the ruling party or the Sasikala family. “Since we are anyway demanding a CBI probe into Jayalalitha’s hospital treatment and death, it can also cover the burglary and the related deaths,” says Manoj Pandian, one such leader. “Since Amma did not leave behind a will, this could be a diabolical move to spirit away her properties.”

Political observers point out, however, that the CBI has a poor track record of solving high-profile crimes in the state. Take the mystery over Rs  570 crore in cash being transported in three container trucks ahead of the 2016 assembly polls. The Madras High Court handed the case to the CBI and the case has not moved beyond the FIR in 10 months since.