The Story From The Van 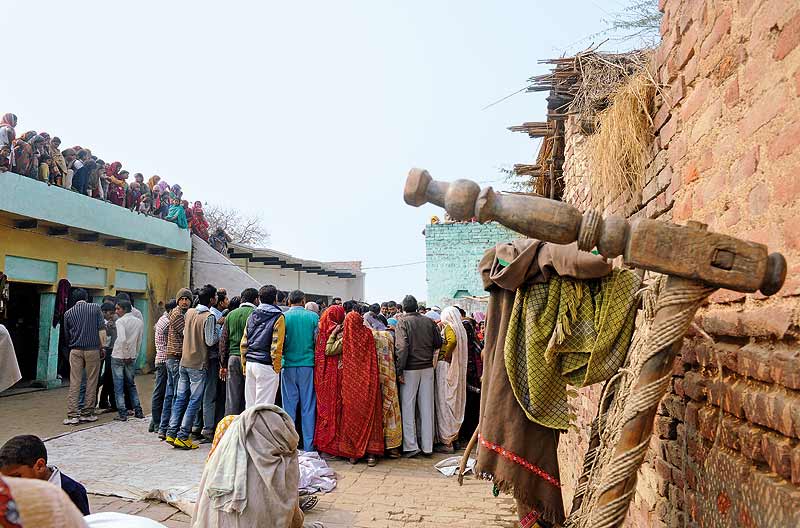 The first thing you notice is the fresh coat of mud that has been plastered on the exteriors of the kuchcha houses in Shergarh village near Mathura in Uttar Pradesh. The drains have been cleaned too, and very recently. Truckloads of mud have been spread to make the dilapidated roads manageable for the visiting vvips.

On some grotesque level, it’s a Peepli Live moment for the village of decapitated soldier Lance Naik Hemraj. The media has arrived here in droves. There was another soldier victim of the January 8 incident, Lance Naik Sudhakar Singh, whose corpse was sent back to his village Dadhiya, in Madhya Pradesh’s Sidhi district. But that hamlet is a long way away. Mathura, meanwhile, is less than 200 km from Delhi, hence the media spotlight on Hemraj’s village.

A big compound with a huge black gate has been kept open since January 8 when the men in olives came to the village to inform the family about the tragedy. People from the villages nearby have gathered since to express their solidarity with the family. Village elders share hukkahs, shake their heads and discuss the vagaries of the world and talk of a time when everything was so much more simpler.

There’s a lot of curiosity about the fancy cars, beacons, choppers, even the Coke cans discarded by the smart set.

Amid all this hubbub, the huge press contingent has the region all excited. Channel OB (outside broadcasting) vans are lined up in the courtyards of mud houses. It’s as if the circus has come to town. People from nearby villages like Dhanuta, Kharaila, Shahnagar, Chata and even Kosi Kalan have come to see and ogle at the happenings. There’s a lot of curiosity about the fancy cars, beacons, choppers, even the Coke cans discarded by journalists in between visits. Some villagers were even seen picking up the cigarette butts dropped by the smart set—exotic enough when it’s only chillums you have seen all your life.

In the midst of all this is the tragedy-stricken family. The wife of the 29-year-old slain soldier is sitting staring blankly at the sky. Dharamwati though did recall snatches of her last conversations with Hemraj for our benefit. “He called to inform me about his leave. He was coming home on February 7. He told me this time he would put the two children (the school-going ones) into the Army Public School in Mathura cantonment. He also wanted to know about the health of his mother. He promised to call me the next day. When I didn’t get the call, I called up the unit but his colleagues told me Hemraj was out. After an hour, one of his friends called me from Mathura Cantonment to say that there had been firing at the border and that I should call the unit to get details. But before we could make sense of it all, two armymen were at my door with the news.”

The army informed the family in the morning and by evening his remains were at home. The family was told that Hemraj’s body was not “in a good shape” and hence would be better left “unseen”. His identity was confirmed, though. Hemraj’s 18-year-old cousin Narendra Singh told Outlook: “We were told by the army that his body was in a very bad way. They requested us not to see it. However, when the last rites were performed the mortal remains were taken out. We have no doubts, it was him.” Just then, there is a whirr of a chopper. The whole village looks up at the sky. Army chief General Bikram Singh has landed.

By Chandrani Banerjee In Shargarh village, UP