The Stench Of Cruel Neglect

How much more shameful can it get when two seven-year-olds have to lose their lives because they didn't have a toilet to go to? 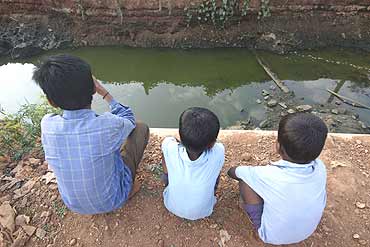 outlookindia.com
-0001-11-30T00:00:00+0553
Bhuvaneshwarinagar and its surrounding Kengeri and Bidadi areas, where Toyota has a plant, are part of the Greater Bangalore plan. It is just about 12 km from the Vidhana Soudha and a stone’s throw away from the university campus. But this proximity to the city’s epicentre has done little to improve the area’s appalling lack of basic amenities. How much more shameful can it get when two seven-year-olds have to lose their lives because they didn’t have a toilet to go to?

On February 24, at about 3 pm, Divya and Soundarya, studying at the government lower primary school, felt the need to relieve themselves. The school had only two toilets: the one meant for students was in an unusable state, while the other—for teachers—was under lock and key. The girls, like other children in the school, then went to their designated relieving area: outside the school, near an open drain, which had sewage water running 6 ft high. Except that they did not return home that evening. Their parents, a poor weaver couple, lodged a complaint. Two days later, they were shocked to find the bodies of the two girls floating in the drain behind their house.

. Following the tragedy, the sewage water has been pumped out, desilting work is in progress and a tall wall is being built on either side of the drain-channel as safety measures. Ironically, the state still has not thought of toilets.