Mayawati's BSP still looks the best horse in UP, but the Brahmin support looks a little mute 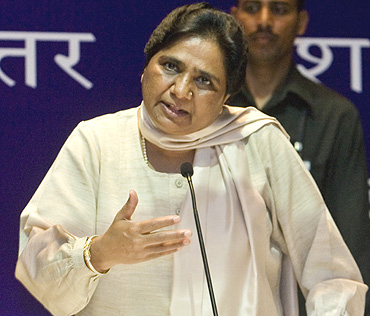 It didn’t matter where I stopped, a tea stall in a kasba, a remote village or a district court, a few "panditjis" (Brahmins) would surface within seconds and take over the conversation. Oracle-like, they would declare that Mayawati was coming to power as she was the only one who could check the rampant crime. Given the influence Brahmins wield in creating public opinion, Mayawati had clearly found herself a powerful weapon of mass communication.

Two years later, as I take the same route—Lucknow, Kanpur, Allahabad, Bhadohi, Varanasi, Jaunpur, Azamgarh, Gorakhpur, Basti, Faizabad and back to the state capital—the Brahmins have fallen silent, speaking only when spoken to. Curious, given Rajya Sabha MP Satish C. Mishra is the second most powerful person in the state, Brahmins hold top jobs in the administration right down to the police stations, and Mayawati has given 20 tickets to the community, double their strength in the state. Compare that with just 17 tickets to Dalits (in the 17 reserved constituencies), even though they are much larger in number.