The States Of True Power

A non-BJP, non-Congress front can script a new scenario 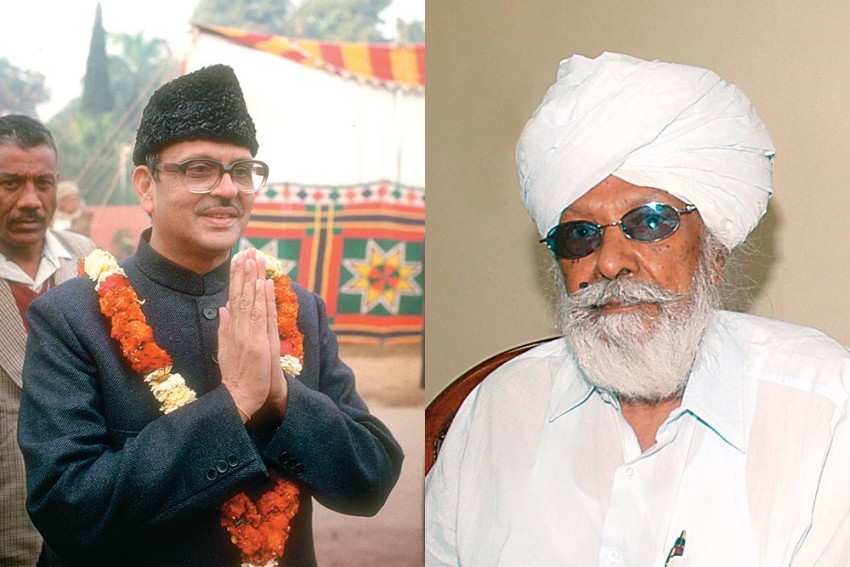 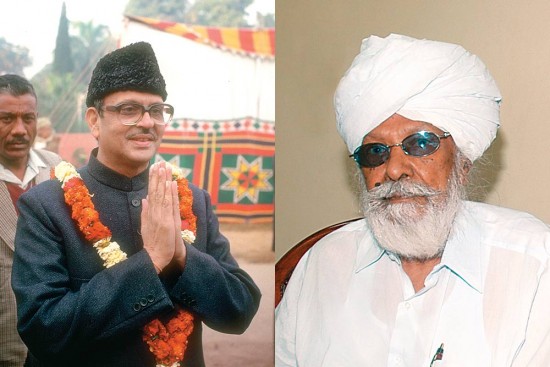 Leaders of regional parties which appear to be in a position to stop the Hindutva rath in its tracks have started talking about coming together. But it is doubtful if they have a proper understanding of the current political scenario. Some of them are raising the old slogan of a “non-Congress, non-BJP government”. That suggests they are living in an era that has passed.

The idea of a non-Congress, non-BJP government arose when the Congress was declining and the Bharatiya Janata Party was growing, and small national and regional parties did not like the emergence of the BJP, which has a communal agenda, as the national alternative. In Harkishen Singh Surjeet, general secretary of the Communist Party of India (Marxist), which, as a Left party, had a progressive image, there was a leader who could bring the small parties together on a common platform. In Vishwanath Pratap Singh, there was an experienced leader with the stature to head a government at the Centre. That combination made the first non-Congress, non-BJP government possible.

At that time, the Congress and the BJP together held enough seats in the Lok Sabha to make it impossible to form a government without the support of one of them. V.P. Singh’s United Front government remained in power with the BJP’s support. When that party withdrew support, it collapsed.  Chandra Shekhar, who succeeded V.P. Singh, was sustained in office by the Congress.

In the 1996 elections, the BJP (161 seats) edged past the Congress (140 seats) for the first time, and the President invited its leader, A.B. Vajpayee, to form the government. As secular parties were unwilling to join hands with the BJP, he could not get the required number. Once again Surjeet started the search for a non-Congress, non-BJP Prime Minister.

The V.P. Singh, H.S. Surjeet combination made possible the first government of small parties across India.

A consensus soon emerged in favour of West Bengal’s CPI (M) chief minister Jyoti Basu. The Politburo’s decision to not participate in a government in which the party did not have a dominant position left the third front parties with no option but to look for someone else. The choice then fell first on H.D. Deve Gowda and then on I.K. Gujral. Both were leaders with no ­national appeal. Their short spells in office were uneventful.

When fresh elections were held in 1998, the BJP emerged stronger with 181 seats against the Congress party’s 141. It was becoming increasingly difficult to keep it out of power. Recognising this, some regional parties decided to play ball with it at the pre-poll stage itself. Among them was the All India Anna Dravida Munnetra Kazhagam (AIADMK). After the elections, more parties joined the BJP-led National Democratic Alliance and Vajpayee was back as the prime minister.

When AIADMK leader J. Jayalalitha found that Vajpayee was not ready to drop the corruption cases pending against her and to dismiss the DMK government in Tamil Nadu, she withdrew support and brought the government down.

In the elections that followed, the BJP under Vajpayee ­retained its primacy with 182 seats, but the Congress’s strength declined further to 114. In the circumstances, the BJP could attract more small parties. With as many as 22 parties in the NDA, Vajpayee completed the full term of five years.

In 2004, the BJP campaigned with the slogan “India Shining”, and thought it could get another full term, but the voters decided otherwise. Its Lok Sabha strength fell to 138 and the Congress’s rose to 145. The thin lead in the House imp­roved the Congress’s ability to attract small parties, and the United Progressive Alliance it led came to power.

Narendra Modi brought the UPA’s 10-year rule to an end in 2014 with a virulent campaign. The BJP enjoyed a majority in the Lok Sabha with 282 seats on its own, but it kept the NDA alive. Modi’s early performance suggested that he was in for a long innings. But lately, there have been signs of a change in the popular mood and the 2019 election is certainly not going to be a one-horse race.

If the BJP’s number comes down and the Congress’s goes up, there may be a return to the earlier situation of small parties having to choose between the two. But must they wait until the elections are over to decide who should form the government?

The difference between the governments led by the BJP and the Congress is a matter more of style than of substance. The roots of such differences can be traced to the two parties’ positions on issues such as secularism and democracy. These form the core of our constitutional system and the regional parties will incur heavy losses if they are undermined.

Unlike Vajpayee, Modi has scant regard for these constitutional ideals. He has no qualms about grabbing power in a state using the governor appointed by him even when the voters rej­ect his party. In some states, he is known to have used the services of serving or retired intelligence officers to work out deals with political parties.

Originally, the Constituent Assembly’s mandate was to create a framework for a federal state. But Partition and other developments superseded it and eventually the Constitution provided not for a federation but for a union of states. It established a Central government more powerful than that of British India. In the 68 years since the Constitution came into force, the Centre’s authority has increased. Rajiv Gandhi amended the Constitution to divest some powers of states to the local bodies. Ideally, this should have been followed by divesting some of the Centre’s powers to the States. This did not happen.

A party which seeks to impose oppressive uniformity based on a warped concept of religious nationalism poses a real threat to India’s diversity. The last four years saw violent elements—let loose by those holding the strings of the party in power—lynching a number of people, most of them belonging to the minorities or marginalised sections. The police remained silent spectators and often colluded with the criminal elements to pin the blame on the victims. Modi, who tweets sympathies to suffering people in distant lands, had no word of solace for those who were attacked under his watch.

Currently, politics in India is played under rules set by the BJP, or rather the prime mover behind it, the Rashtriya Swayamsevak Sangh. It generally operates at two levels. At the higher level, Modi—whom the RSS pitchforked into the prime minister’s chair—polarises the country on religious lines and propagates that after ‘seven decades of inaction’ by Nehru and his successors he has started moving the governmental machinery for the first time. At the lower level, shadowy groups carry forward the polarisation project, not on the scale in which it was implemented in Gujarat when Modi was CM, but in an equally deadly, if controlled, manner.

The Congress is offering some resistance to the BJP, but there's nothing to indicate it's working to change the rules of the game set by the Hindutva camp. It appears to have concluded that mild Hindutva is presently its best strategic option.

It is for the small national parties and regional parties to take up the challenge. They are generally conscious of their local strength, and sometimes there is an understandable tendency to exaggerate it. But they are oblivious of the strength they can command at the national level if they can forge a ‘federal front’ (FF) , coordinate their efforts and formulate alternative policies, keeping in mind not just the needs of their states (or the social groups that constitute their support base) but of the people of the country as a whole. To begin with, they must stop playing second fiddle to the pan-Indian parties and become pro-active instead of being merely reactive. States with dominant regional parties ­command no less than 170 seats in the LS, no small number.

Andhra Pradesh CM N. Chandrababu Naidu recently withdrew his Telugu Desam Party’s ministers from the NDA government to protest Modi’s failure to grant special status to the state. It is not in doubt that the separation of Telangana has hurt the residuary state financially. Must suitable remedial measures to tide over a problem of this kind be dependent upon one individual or party wielding power at the Centre?

In making out a case for going back to the concept of a non-Congress, non-BJP government, Telangana chief minister and Telangana Rashtra Samiti chairman K. Chandrasekhar Rao said, “Farmers, Dalits, most backward classes are neglected. For how long do they need to face problems? This has to change and this is not possible from these two parties (the BJP and the Congress). Hence a non-Congress, non-BJP front should be formed in the country.” Though he started with a correct premise, he reached a conclusion which is not quite correct.

The non-Congress, non-BJP governments too were unable to tackle these problems. What is needed is to provide the states with sufficient power to formulate policies beneficial to farmers, Dalits and backward classes and to free them from having to depend upon the Centre. This will need a reordering of the constitutional system to make it more federal, not to say truly federal. The national parties have created an atmosphere in which small parties feel too intimidated even to talk of a measure of regional autonomy. They will make no move to invest the states with more powers unless compelled by circumstances. A federal front can compel them to do so.

States with dominant regional parties command no less than 170 seats in the Lok Sabha. It is no small number. The small national or reg­ional parties which ruled the Hindi states of Uttar Pradesh and Bihar, alone or in coa­lition, in the not too distant past cannot be written off as spent forces. Under right con­ditions, they can stage a comeback, as is clear from the results of the recent by-elections in these two states. If they care to properly reassess their position, as the Samajwadi Party and the Bahujan Samaj Party did before the by-elections, they can legitimately be part of the federal front. Add the 120 seats of these two states too, and the number of Lok Sabha seats the FF can bid for goes up to 290.  Hence, it is in a position to decide who should rule and how.

A grave disadvantage of the leaders of these parties is that they can provide one another little electoral help because of the reg­ional or sectarian limits of their appeal. This disadvantage can be overcome to a considerable extent if the FF becomes a reality before the Lok Sabha elections and is seen as a credible contender for power or at least one that will play a decisive role in the formation of the next government.

The federal front can script a new political scenario. But the parties and the leaders concerned have to go a long way to emerge as a united force with a people-oriented programme that is different from that of the large national parties, which are too indebted to the rich and the powerful. The billion-rupee question is: can they rise to the occasion?

(The author is a political commentator)

Playing With Pride In Polls