The State Highway To Aoshi

A grey homogenisation has not yet eclipsed our rainbow palates

In happier times, Kashmir used to attract a large number of tourists, and one recalls a row of crowded food stalls in the vicinity of Shalimar and Nagin Bag that used to cater to this clientele an array of delicacies—from idli-dosa to tandoori tikka. What was intriguing was, to sample local fare—gushtaba or tabak maaz—one had to scout really hard. Not so long ago, we had a similar experience down south. Small eateries in Kanyakumari advertised their mouth-watering Gujarati and Rajasthani thalis. This is what we feel reflects the ltc syndrome. Wherever you go, the tyranny of the tandoor follows and most often, the regional cuisine that is dished out is mostly inedible, under the general impression that Indians aren’t adventurous and like to stick to their own food. What has happened in the past few decades isn’t really the evolution of a pan-Indian taste; the pseudo-national menu needs scrutiny and deeper sociological analysis. 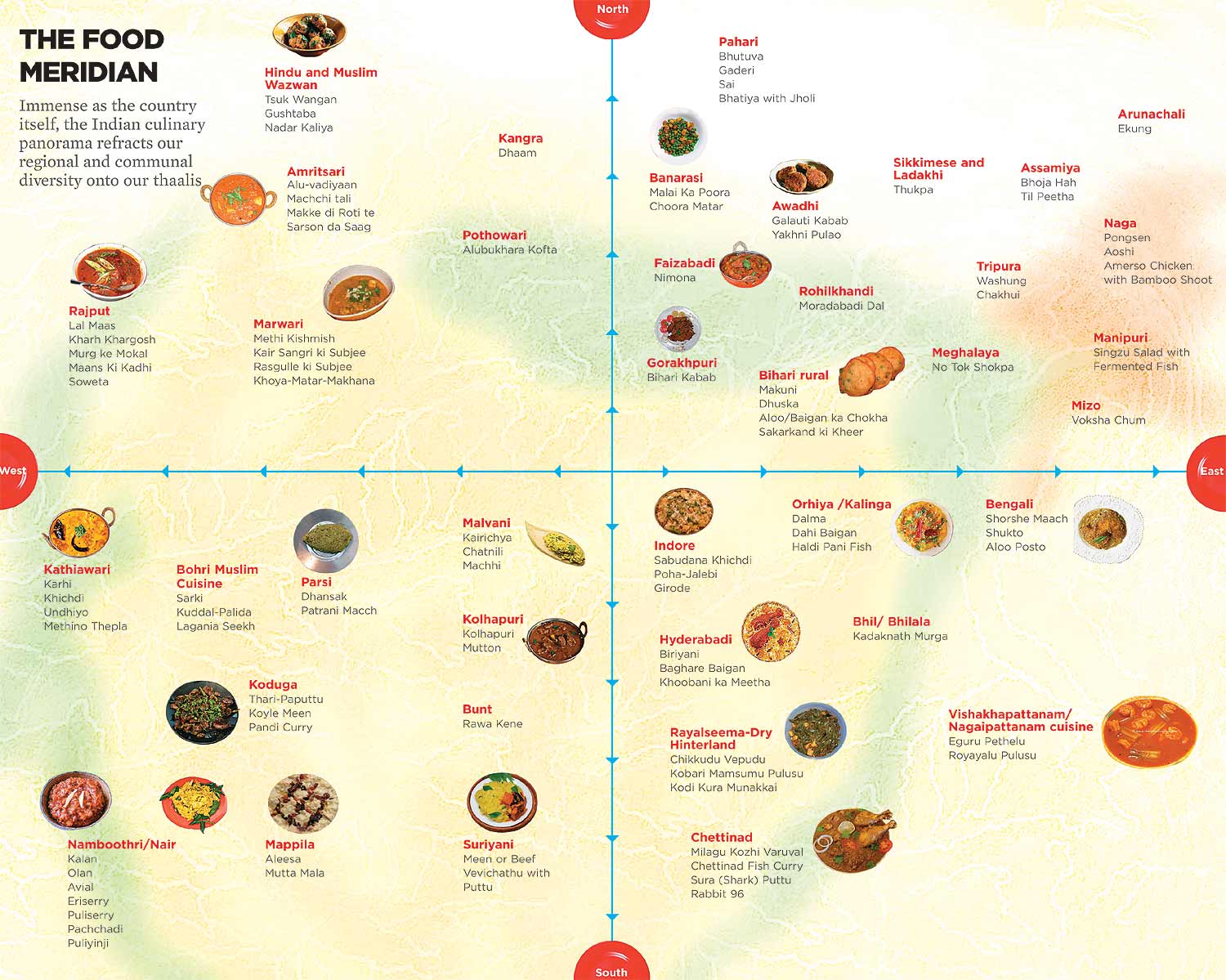 True, taboos are breaking and prohibitions and prescriptions have lost their power over the majority of young Indians, specially those living away from home in cities, but this should not blind us to the fact that there is growing interest in traditional recipes and ethnic (regional and sub-regional) foods. In this age of identity politics, how could it be otherwise? Laloo Prasad Yadav’s daughter may contribute recipes for a biriyani in an upmarket rice cookbook, but father would never lose an opportunity to flaunt his favourite chokha-litti. Doctors have tried their best to scare the daylights out of their clients, but this has not brought about any significant reduction in consumption of poori-subzi or kachori-jalebi in in the Hindi heartland and Rajasthan. Many companies, Indian and multinational, are striving to persuade us to choose healthier options for breakfast and snacking; almost all are flattering the Indian palate by imitating the time-tested indigenous stuff.

But let’s not give you the impression that the swadeshi banner is fluttering high, proclaiming a decisive victory over alien invaders. The talk that the tandoori murgh will make Kentucky Fried Chicken scram may have boosted Indian egos for a while, but as any objective person can testify, the all-American favourite has made steady inroads into our markets. The pizza toppings too have similarly stooped only to conquer in the long run. Paneer, aloo tikki bits, seekh kabab slices and curried chicken may sound delightfully desi but their treatment makes them phoren. Slowly but surely, those who frequent these fast food joints begin to forget the taste of the original dish. Collective amnesia in matters culinary can have disastrous consequences for a people. In the absence of shared benchmarks by the community, elegant recipes become a pale shadow of their classic selves. How can the counterfeit work magic? 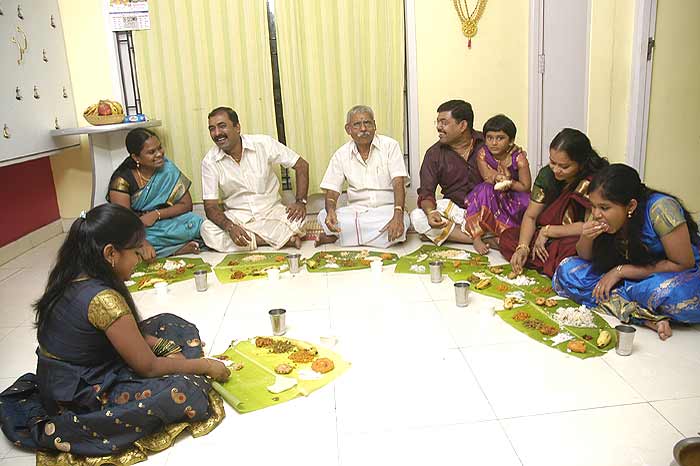 A Tamil family enjoys a traditional meal.... Respect in the family kitchen is what keeps traditional fare alive.

It is grossly unfair to blame others for our weaknesses. Our so-called master chefs of the heritage and other hyped varieties aren’t serving the cause of Indian food well either. Some, employed by five-star deluxe hotels, believe that only Frenchifying Indian food can help them gain status in the kitchen and favour with their patrons; others mindlessly ape the molecular pioneers in the west and hope they will be lauded for an adventurous spirit, if not for authenticity. Worst of the biradari are those who look down on their paying customers and consider them unworthy of the sublime fare their ancestors served to the nawabs and maharajas of yore. The lament is commonly heard in places like Lucknow and Hyderabad, “Ab kisey hai tameez khane ki? Kahan hain waise shaukeen?” They cast a spell with this patter that is hard to break. Few muster up the courage to find faults with rank bad cooking—a burnt-out or a raw burra. The same applies to a galouti—melt-in-the-mouth it may be, but utterly tasteless—and a biriyani that is long on colour but very short on aroma and flavour. What lays claims to the Grand Mogul legacy is in fact Turko-Afghan, mediated by Punjabi food, blending the lowest common denominator of all three strands. This, alas, is confused by the natives and the foreigners alike, with the ‘Taste of India’. We have already let many a qorma and salan with a distinct character become extinct. Ditto for kabab. Boti kabab, dora kabab are seldom encountered in the public domain in their birthplace. The real tragedy is that many labour-intensive, time-consuming recipes in the regional repertoire have also disappeared due to the break-up of the joint family system and because well-trained domestic helps are hard to come by. We have been so completely swept off our feet by clever advertising that we seldom pause to ponder that, what is alleged to be prohibitively expensive is in fact used in minuscule, affordable quantities. Whatever the master chefs may state, great taste isn’t created by exotic ingredients alone. The joys of the plebeian and the seasonal are many and their temptations no less alluring than recipes with a mystique.

What’s heartening is that the young have started asking questions. They are insisting on value for money. Our only regret is that some are distracted by the size of the portions, while others are bought off with a little pampering of their egos. They are ‘recognised’ as they enter and encouraged to order pompously by the stewards and restaurant manager. It is hard to resist the temptation to impress fellow guests. Remember, all restaurants have to change menus periodically, not only to provide novelty and weed out slow-moving items, but also to justify an increase in prices. The names change, but it’s the same old wine turned to vinegar in new bottles.

Perhaps it needs to be emphasised that in gastronomic matters, the well-travelled and well-heeled Indian today is far more discriminating when the cuisine in question is European, Chinese, Japanese, Arab or Mediterranean. The dazzling diversity of Indian inheritance remains to be discovered. Some may have had a taste of Chettinad, Suriyani, Malvani, but for the multitude these words remain geographical indicators—a rough guide to navigate the florid, overwritten food festival menus. Another problem with food festivals is that they keep “unveiling” and showcasing the same old “gems” every time. The diners remain strangers to the delightful staples and refreshingly different common dishes. The diversity is annihilated as the cliched stars steal the show again and again.

This isn’t meant to be a nostalgic lament. However, it would render us vulnerable to the charge of being economical with truth if candour was eschewed. We are firm believers that our cuisine—for that matter of any people—can only flourish if it enjoys a respect in family kitchens. No amount of designer dining, resuscitating fusion or cutting-edge science can bring back to life something that is dead. Recipes, like our costumes and idioms, are not akin to bespoke tailoring, which can be part of the life of the elite. If the corner grocery shop stops stocking required ingredients because there are no buyers, then no life-support system can work. Our major concern is that Indians who are willing to pay the proverbial top dollar for Norwegian salmon, New Zealand lamb or imported cheeses, chocolates and wines think that they are being ripped off if a scarce ingredient used in Indian cooking—northern or southern—is involved. People may visit Khari Baoli in the capital for a lark—it is arguably the largest such market in the world—but general awareness of Indian spices and other ingredients is eroding dangerously fast. 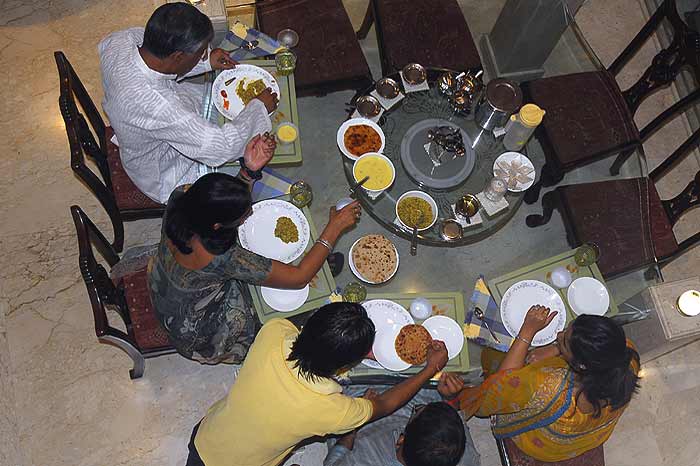 These days, families want to know what grandma cooked, what particular variants aunts tried out...

We have nothing against labour-saving gadgets and pre-processed packaged ingredients if the quality is assured. The Indian market is replete with such riches that make working in the kitchen a joy. Across the land, housewives and single male cooks have benefited from this bounty. Coconut milk comes in cartons and ginger-garlic pastes without preservatives and additives are a boon. Advances in food processing, packaging and refrigeration have brought to the common man’s table what was earlier the privilege of the rich. But we are constrained to shake our head in despair when dehydrated vegetables or those picked from the cold storage are routinely used and then people complain about insipid food! We buy on trust on the basis of claims made by packers that the basmati is from Dehradun (where hardly any paddy fields survive!). You can, with little effort, multiply illustrations to prove the point that few care for the purity and intrinsic quality of the ingredients.

There is another interesting trend that is discernible. Restless people in search of their roots are not content to identify with just a geographical region, be it Kashmir or Kerala, the coastal belt or the heartland. They wish to know, “What did grandma cook? Was it Bunt, Mappila, Suriyani, Malvani or Kathiawari, or Sambali Rohilkhandi fare?” The variety of tribal repast is just being discovered—from the Northeast to the heartland. There is greater awareness about the riches of poverty—millets and other coarse grains and plebeian vegetables. How all this will make an impact on the culinary mainstream is hard to tell.

The times, as the old song goes, are changing. The Indian foodscape can’t remain unaffected. But few can guess where the blowing winds will take us.

Pushpesh Pant, A former professor at JNU, the writer is the author of India Cook Book and Gourmet Journeys in India