The State Can Only Be A Goliath 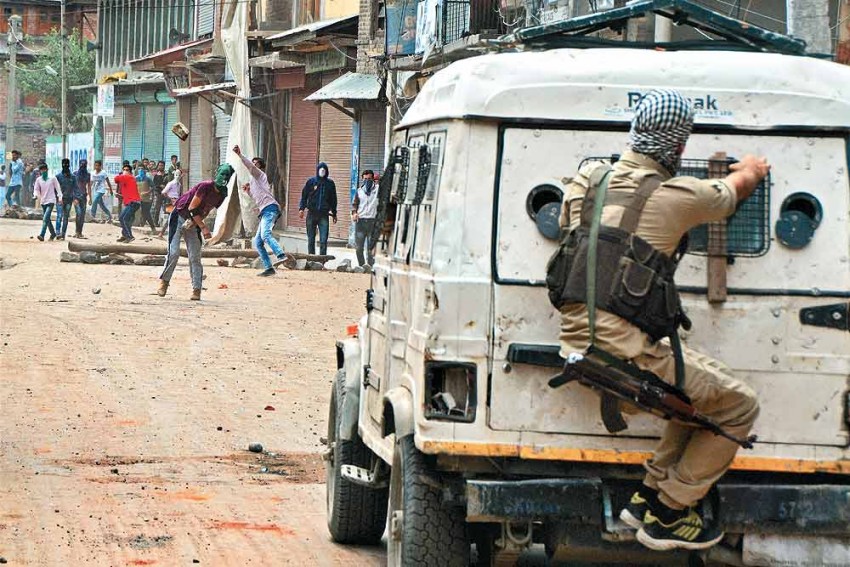 Voice Of The Common People
Protesters throw stones at a police vehicle in Srinagar
Photograph by PTI
Ashis Nandy September 02, 2016 00:00 IST The State Can Only Be A Goliath 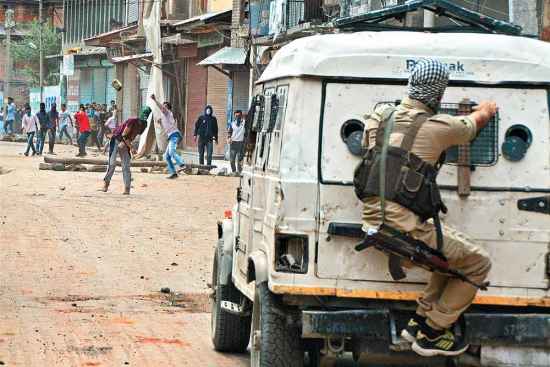 The current crisis in Kashmir is similar to the situation in Palestine. In both places, teenagers have been throwing stones and they are the ones who are mostly getting killed. In both places, the army and the ruling regime is saying that the kids are a front for terrorists and other enemies of the state. And the long-term eff­ects in both countries are likely to be the same.

In Kashmir, an entire generation of thinkers, scholars, political activists, including those who think that terrorism has done more harm than good to Kashmir, have been moved and deeply saddened by the cruelty and the surplus violence that our politicians and army have pro­­duced. Even the central leadership seems embarra­ssed; they know that it has been a case of overkill but cannot say so openly. I am pretty sure that there are many in India who are unable to express their bitterness publicly, as the dissenting scholars in Israel are doing, though the world press is having a field day, comparing India with Israel. Reportedly, the pellet bul­lets that have blinded more than fifty teenagers in Kashmir have been imported from Israel. But we have not purchased the Israeli concept of dissent. That could have given the Kashmiris the feeling that at least some Ind­ians hearts have bled for them and empathise with the plight of a community caught between  mil­­itants, the police and the army.

K.F. Rustamji told us how Kashmiris made great personal sacrifices to help the Indian army in 1948. That popularity has turned into today’s hatred.

Obviously, the last two months in Kashmir have hardened positions on all sides and will have long-term consequences for the credibility and image of the Indian army. All compromises will now look like surrender to both sides, the militants and the ultra-nationalists of India. And the Indian army’s image will be associated with the blinding of teenagers forever, the way its image is bound up with photographs of Manipuri women offering themselves to be raped by the Indian army. (The photographs have now become a global spectacle.) The mood in Kashmir can be gauged from reception that political leaders like Mani Shankar Aiyar got when they went to a hospital to see the kids blinded by pellets. Aiyar was not even allowed to enter.

Kashmir is also going to be a very long haul for India and its channel-hopping, apparently hard-eyed exp­erts on terrorism and strategic affairs. Louise Richardson, a respected expert on terrorism and the author of the much acclaimed What Terrorists Want, has in her book a chapter called ‘Why the War on Terror can Never be Won’. It begins with a quote from Georgios Grivas, who headed the EOKA, the feared Greek terrorist grouping in Cyprus, euphemistically called a guerilla movement, in the 1950s:

“The security forces set about their work in a manner which might have designed to drive the pop­­ulation into our arms. On the pretext of searching, they burst into people’s homes by day and night, made them stand for hours with their hands up, abused and insulted them.... These attempts to frighten the people away from EOKA always had exactly the opposite effect...: The population were bound more closely to the organisation [EOKA] and the young scorned the threat of the gallows.”

The situation in Kashmir today is proving Grivas right. It is not the first crisis of its kind and, I am afraid, it might not be last either. For, nation-states do not usually learn from the experiences of others. They have to go through the same experience that others have gone through before giving up and, by then, it is always too late. So, what was originally a manageable pinprick of a movement supported by local dissenters—with instigators and financiers in Pakistan trying to control it from there—is transforming itself into a full-fledged independence struggle before our eyes. This struggle now will get decentralised and it is unlikely to come under anybody’s control, not even of Pakistan. This too is comparable to the situation in Palestine. No serious scholar believes that the Palestinian rebellion against Israel is controlled by Hamas. Hamas might be a part of the picture, but the Israeli army’s performance and the Israeli regime’s style of handling the rebellion has turned a movement of dissent into a highly popular independence struggle long ago. As a Palestinian psychiatrist once put it, “The question now is not who wants to be a suicide bomber but who does not.”

In  Kashmir, the militants and, more than them, Indian aficionados of a hard, garrison state and a fully centralised, dissent-free political order have already succeeded in further delegitimising the security forces and country’s political elite. As I have already said, the army sounds apologetic, so do our political leaders. We shall soon find out that we have paid a heavy price, internationally and in India itself, by trying to emulate Israel.

The roots of Kashmir’s present crisis extend to the time when New Delhi cleverly began to nibble at Kashmir’s autonomy. The opposition, not wan­ting to be left out, started decrying the presence of Article 370 in our Constitution. The BJP, at the time a small opposition party, consistently attacked even the small, often-­symbolic markers of autonomy that Kas­h­mir enjoyed. Yet, everyone knew that in some other states of India, there were powerful chief ministers who enjoyed much more autonomy than the CMs of Kashmir did, except probably for Sheikh Abdullah before he was jailed.

Today, the BJP is in power as a junior member of a coa­lition in Kashmir and learning to adjust to the consequences of trampling on our federal Constitu­tion. Like all blue-blooded politicians, once they get power, the BJP too is singing a different tune. But its passion for a highly centralised state has not declined. There is no appreciation whatsoever that in a highly diverse, complex polity, federalism is not a gift to local despots, minorities or secessionists but a gift to the central authorities. For, it protects the Centre from local grievances, discontents and movements threatening to cumulate and target the central leadership. If you have a weakness for centralised rule, you should be prepared for the centralisation of disparate discontents too.

Now that the die has been cast, let us frankly admit that we have given the Kashmiris the impression that we are a country of hypocrites; that we have consistently bet­rayed them by not living up to our own Constitution. I remember K.F. Rustamji once telling us how the Kashmiris helped the Indian army during the 1948 attack on Kashmir, often making immense personal sacrifices, almost invariably refusing to take any money. The Indian army was very popular in Kashmir then. It must have taken dazzling political talent to turn that popularity into the hatred that we see today.

The tragic events of the last two months will become now part of Kashmir’s identity and self-consciousness. They will become the stuff of myths and ballads. Even those who seek a peaceful solution or at least want to keep some channels of communication open with the government of India, will find it extremely difficult to face their own families, friends and communities. Kashmir was always a difficult place to rule. The people there have the reputation of being both independent-minded and cussed. My late friend Girilal Jain, otherwise a hardboiled statist, used to say that the Kashmiris were a difficult people to live with and we should at some point give Kashmir to Pakistan, to see how they live together. But the fact is that the Kashmiris do not want to go to Pakistan either. They want azadi, nothing more, nothing less.

The first intifada (‘shaking off’ in Arabic) started in December 1987 in the Gaza Strip, encapsulated in memory through photographs of crowds of irate Palestinian youth throwing stones at Israeli troops. Kashmiris first used the tactic during the unrest that engulfed the state in 2010. In both cases, the Biblical symbolism of a doughty David taking on the tyrannical Goliath adds a pungency to the striking—and tragic—images.