Cricket is now a very Indian game. It is as Indian as the Taj Mahal, the Lok Sabha, or the English language 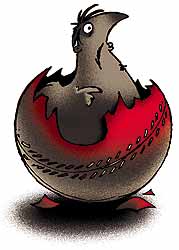 outlookindia.com
-0001-11-30T00:00:00+0553
Some things come naturally, as if we're born to it. Some people are born mathematicians, others musicians, dancers or philosophers. I believe a nation too is born to excel in some things. It can discover that, as a people, they're not merely gifted in something that is quite alien to their past experience, but can also have fallen deeply in love with that thing.

For us, that thing is cricket. We've absorbed the game into our collective bloodstream even as a shot of heroin into a junkie's veins. We worship cricket, we dream cricket, we are cricket. I suspect this game has been waiting in the wings of our national subconscious for centuries, even millennia. If the British had not introduced the game for India over two centuries ago, we'd have had to invent it. India has always had the genius of absorbing other cultures that have invaded her over the centuries. We're a seamless continuity of our historical experiences, whether it is Afghan, Mughal, British, French or Portuguese. These alien cultures sit with us as if they've been a part of our identity all along.

Cricket is now a very Indian game. It's as Indian as the Taj Mahal, the Lok Sabha, or the English language. It's become inseparable from our Indian psyche; it's woven into our culture and our language. Words like 'silly point', 'deep mid-wicket', 'first slip', 'square cut'. From one end of India to another, we understand these technical words, even if we don't speak the English language. There's the commonality of these words that eases our communication with total strangers. We can bond in an instant listening to a radio commentary in a rural area or glimpsing a Test or a one-dayer on television. "What's the score?" "Who's out?". So we bridge the gaps between ourselves through this game.

Cricket fuses us into one people—it dissolves our complex diversity, especially when we're playing in the international arena. It's the nature of sport that it can give a nation a single identity, whether for a 90-minute football game or a five-day Test match or a one-dayer. It also has the strange effect of uniting Indians who have long left our shores to live in the UK or Australia or New Zealand. They come to cheer us on, identifying briefly with the country of their forefathers and drawing some strength from that identity. We know when we play Pakistan especially, we're single-mindedly Indians, determined to win. Sport can also be a substitute for war, certainly a healthier one.

We've grown up with cricket coursing through our blood. Go anywhere in India—east, west, north south, desert, plain, mountain, valley—and you'll see cricket being played. From the smallest of boys to grown men, we all know the rules and how to play this game. They're not playing hockey (11 sticks and a ball) or football (biggest ball). We create cricket pitches on the road, on a building site, in the middle of the jungle too, with stumps drawn on the ground, a stick for a bat and any kind of ball.

Why have we been seduced by this game? It's a game of style with substance. In that style—batting or bowling—we're drawn to the aesthetics of the action taking place on the field. It has subtleties, yet possesses brutal power. We see the rhythmic beauty of the game, the all-day raga, the five-day raga, rising and fall, a note stretched out long. It's a game which, like the raga, demands improvisation of the moment and of the mood. A cover drive, a square cut, a leg glance, the ball spinning away from the bowler's hand, making that graceful arc to bite and turn, these are the musical notes in the game.

The substance lies in its complexity, the underpinning of a philosophy in how the game is to be played. It's a game with not only a subtext but also of epic qualities which reflect our imaginings of our epic past. Cricket is a long narrative game, unlike other sports. They are merely short stories and we're not a short story culture. We like our stories long and complex.

We can settle down, with our picnic lunches, our teas and watch a cricket match unfold gracefully and gradually. Even as our ancestors would settle down to hear the story-teller narrate those familiar epics, the Ramayana or the Mahabharata, in the village. Cricket has a beginning, a middle that can tensely lead us into any direction and then the satisfying, or not, end.

(A novelist, filmmaker and playwright, Timeri N. Murari started his writing career as a police reporter for a small-town Canadian newspaper before moving on as features writer for The Guardian. He's also written for The Sunday Times, The Washington Post and various other magazines. In 1997, he wrote and produced The Square Circle, voted by Time magazine as the best film of the year.)