The Spirit Is Willing 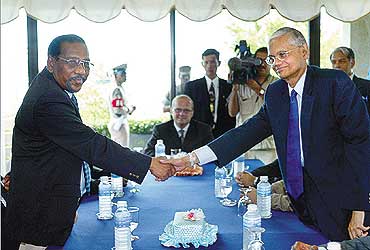 outlookindia.com
-0001-11-30T00:00:00+0553
When they showed up before the international media at a hotel close to the Sattahip naval base, Thailand, on September 18, the chief negotiators for the Sri Lankan government and the LTTE conveyed an air of ease and comfort through their body language. The two men—Gamini Lakshman Peiris representing Colombo and Anton Balasingham the Tigers—appeared for the press conference walking side by side, involved in a conversation. It best indicated they could do business with each other; seek a resolution to Sri Lanka's ethnic conflict in this case.

This was proved rather conclusively when Balasingham dropped a bombshell: the Tigers were moving away from their struggle to establish a separate Tamil Eelam. "We operate according to the concept of a homeland and self-determination. Homeland doesn't mean a separate state as such," he said. "Saying that the LTTE is fighting for an independent state has no relevance."

Signs of this significant shift were evident at the September 16 opening ceremony that preceded the 12 hours of negotiation spread over two days. In his prepared statement, Balasingham made no mention of Tamil Eelam, the separate state the Tigers have been fighting to establish since they appeared on Sri Lanka's political landscape in the early 1970s. Mention was made, however, about administering the area the LTTE envisaged as Tamil Eelam. "It's crucial that the LTTE should play a leading and pivotal role in administration as well as the economic development of the north-east," he said.

The opening ceremony also revealed a healthier outlook on the Sri Lanka government's part. The stress was on negotiations and dialogue to achieve political goals. "We turn our backs on war as an instrument for realising the dream of a nation," said Peiris in his opening remarks. "The intensity of pain and deprivation, which pervaded the armed conflict of 18 long years, has banished from our minds—in perpetuity—the appeal of sabre-rattling."

As the outcome of the first round of the peace talks at the naval base here became known, it was clear that Peiris' and Balasingham's body language during the inaugural was genuine—two men on either side of Sri Lanka's bloodiest political divide willing to seek the other out, and talk and listen in their quest to strike a peace deal. Peiris, in fact, said as much: "I've enjoyed working and meeting Dr Balasingham. We have had conversations outside the process."

Other negotiators, too, warmed up to each other during the three days they spent at the tightly-guarded naval base overlooking the calm waters of the Gulf of Thailand. For instance, Rauff Hakeem, a Sri Lankan cabinet minister and head of the country's largest Muslim political party, spent an hour in the bungalow that Balasingham was staying in. And there were long chats over tea and coffee away from the negotiating table and also during the strolls that the negotiators took with their counterparts in a garden on a hillock of the base. The mood here prompted Vidar Helgesen, Norway's deputy minister of foreign affairs, who was part of a four-member Norwegian delegation participating at the talks as the peace brokers, to say: "It actually seemed like they had a very good time."

This chemistry, moreover, was reflected in the consensus on the key decisions the negotiators arrived at during this initial round and, importantly, the agreement to address the thornier issues of the Sri Lankan conflict during subsequent talks. Receiving top billing were the existential issues faced by the civilians living in Sri Lanka's war-ravaged northern and eastern provinces, like an accelerated effort to clear landmines and a push to help some 1 million internally displaced people. In addition, as further evidence of trust between each other, the two parties approved the creation of two joint committees, one to "deal with issues relating to high security zones" and the other on humanitarian and reconstruction activities.

Kept away from the negotiating table, according to Balasingham, were contentious issues such as the LTTE's commitment to give up violence and decommissioning and disarming. Similarly, say Sri Lankan negotiators, they didn't discuss the question of power sharing and constitutional changes to solve the overarching political problem—how much control Colombo is prepared to cede to the Tigers in the country's north and east.

Little wonder Erik Solheim, Norway's peace envoy for the Sri Lankan conflict, thought they made good progress, much better than expected. And he is hoping that the international community gets the message and responds in the form of development assistance. "The need of the hour is to get the money (to help reconstruction)," he revealed. No one would grudge Sri Lanka that.