The Spill Bill Is Here 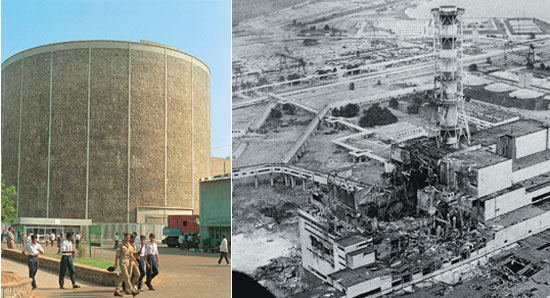 Writing Out An Anticipatory Bail

It seeks to cap the level of compensation (likely at $450 million) in the event of an accident and makes the operator, not the supplier, liable for it.

Are the operator and the supplier different?

Yes, the Nuclear Power Corporation of India will be the operator; the suppliers are big foreign companies like America’s GE and Westinghouse and France’s Areva.

Is the supplier liable to pay compensation?

No, it’s exclusively the operator’s liability, though it can enter into an agreement with the supplier to share the burden of compensation.

Why a cap on compensation?

Insurance companies don’t provide cover for unlimited liability. Compensation over and above the fixed amount will be the Indian government’s responsibility.

Why do critics feel the bill favours American companies?

What is the government’s stand?

Unless there’s a domestic liability regime, no foreign company will invest in the civil nuclear field. Without it, India is unlikely to be eligible for other funds from foreign bodies if a nuclear meltdown or a major accident takes place.

Is a compensation of $450 million adequate?

Certainly not. For instance, the compensation paid by Union Carbide to the
victims of the 1984 Bhopal Gas Tragedy was just $470 million, according to one estimate, it amounted to nine cents per day per person over the 19 years since the incident occurred. Initial official death toll was 3,000; subsequent deaths were nearly 15,000; people disabled permanently totalled 50,000. A nuclear disaster will have much wider and far-reaching negative consequences than what happened in Bhopal.

Chernobyl disaster, Ukraine, 1986. Over 50 people died at the plant. An estimated 65,000 died from Chernobyl over the years; 400,000 people from neighbouring areas of Ukraine, Belarus and Russia were evacuated and an “exclusion zone” of 3,000 sq km was created and deemed off limits for human habitation for an indefinite period.

The Indo-US nuclear deal simply refuses to go away, goading activists to engage in a furious debate over a contemplated legislation. Called the Civil Nuclear Liability Bill, it’s considered imperative to lure foreign players into the lucrative civil nuclear energy sector. But its provisions have raised serious questions over the government providing access to foreign nuclear companies, particularly those of the United States, to the Indian market without holding them responsible for the severe repercussions of any accident. This debate also has the echo of that familiar question: is nuclear energy a viable option for India?

“A nuclear accident could occur due to faulty equipment or design, so the supplier should be made liable.”

There are two contentious aspects of the proposed bill. One, it proposes to cap the level of compensation at $450 million in the event of an accident at a nuclear facility. Two, the responsibility for paying this compensation will rest on the operator (likely to be the Nuclear Power Corporation) and not the supplier or foreign companies building and installing reactors in India. “Even from the free market point of view, such a proposal is totally flawed,” says writer-activist Nityanand Jairaman. His argument: since an accident in a nuclear plant could take place because of faulty design or substandard equipment, the supplier too should be held liable.

But the Indian industry thinks otherwise. A recent FICCI working group report on civil nuclear energy, chaired by Nuclear Power Corporation chairman S.K. Jain said, “It’s advisable that the liability for nuclear damages in India be solely attached to the operator of the nuclear installation. The rationale is further augmented by the fact that any activity, whether in respect of supply or services, is being utilised for the operator and not otherwise.”

In a nutshell, this means the supplier—foreign companies like France’s Areva SA, Russia’s Rosatom Corp and US giants GE and Westinghouse—will reap huge profits by setting up nuclear reactors and selling their technologies, but will not be required to pay compensation in case of a nuclear accident at their plants. It will also be the operator’s liability to seek insurance cover for a maximum limit of $450 million. Compensation over and above this amount would be borne by the Indian government. The FICCI report, however, adds a caveat—the operator and supplier could enter into a private contract to share the compensation burden.

Says Praful Bidwai, writer and a member of the Coalition for Nuclear Disarmament and Peace, told Outlook, “This is being done under the combined pressure of the US and Indian industry, both of which are keen to get a share of the Indian civil nuclear energy pie.” However, the Department of Atomic Energy (DAE), responsible for formulating the proposed legislation, says putting a cap on compensation is an international practice. The reason, say DAE officials, is simple—a nuclear accident can cause colossal damages and raise demands for inconceivable compensation amounts. Typically, insurance companies are not willing to underwrite unlimited compensation. Consequently the cap.

But why absolve the supplier from liability? Activists allege this proviso has been introduced to enable the American companies to enter the Indian market. It’s easy for the French and Russian companies, which are either completely or partially owned by their governments, to buy an insurance cover for the earmarked $450-million. Since the two US companies are privately owned (though Japanese firms now have major stakes in them), finding an insurance cover would have been a gargantuan task. Without the bill absolving the supplier of liability, the Americans run the risk of being edged out of the Indian market, estimated to be worth over $200 billion.

“We’re only trying to create a level playing field,” justifies a South Block official, saying the legislation will help attract investment in the civil nuclear energy sector. Critics, however, accuse the UPA government of favouring the Americans who, during US secretary of state Hillary Clinton’s recent visit, managed to secure a site each in Andhra and Gujarat for nuclear plants (worth $10 billion) based on US technology.

Interestingly, three international conventions—the Paris Convention (1960), the Vienna Convention (revised in 1997) and the Convention on Supplementary Compensation for Nuclear Damage (CSC)—also attempt to provide such indemnity to the global nuclear industry. The CSC, however, hasn’t yet come to force as it has been ratified by only three countries. Arguing that it is essential to have a CNL (Civil Nuclear Liability) framework to attract foreign investment and technologies in the civil nuclear energy field, DAE officials also hold out the imminent possibility of India signing and ratifying the Vienna Convention and the CSC. They feel this could help India access larger and “multi-layered” compensation from international sources.

But critics say the funds generated through these measures would hardly suffice, pointing to the scale of damage wrought by the Chernobyl nuclear disaster to bolster their point. Closer home, activists point to the experience of the 1984 Bhopal gas tragedy and say the $470 million as compensation was grossly insufficient (see infographic). “It’s unfortunate that a negative lesson is being learnt from the Bhopal gas tragedy,” says Satinath Sarangi of the International Campaign for Justice in Bhopal. He feels the $450-million cap and transfer of liability to the operator has been done because American companies, after their experience in Bhopal, are wary of entering the Indian civil nuclear market unless they receive guarantees of not being held culpable in an accident.

The resistance to the bill, the draft of which is ready, has set the stage for the Opposition to accuse the UPA of succumbing to “US pressure” yet again.

A Fat Lot Of Trouble