The Song Of Sicily

It’s amazing what a little extra helping of food can make. Ah John, Ah Dory, Oh, to dine in Sicily. 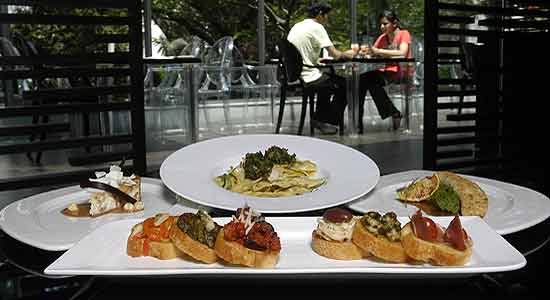 It started life as Absolut, a place of such minimalist chic that people forgot that basically you go to a restaurant to—well—eat! Luckily, for them and us, the Sicilians have been called in brandishing their zucchini blades, twitching their gremolatas, threatening to push you against the wall and feed you with a “Saffron risotto” and pummel you with a pannacotta served with a deadly infusion of glittering red, Type AB raspberry coulis. Or to put it in plain English, the restaurant, now run (along with the boutique hotel in which it is located) by Priya Paul’s successsful Park group, has been renamed It-Alia. And you know what, people just love it. It’s amazing what a little extra helping of food can make.

People are thronging back here and luxuriating in the gorgeously wicked truffle-scented sauces, luscious pastas and cheese-filled gnocchis that reek of a weekend with Aurelio Zen, the fictional sleuth of the late, much-lamented Irish writer Michael Dibdin’s mystery series, set in Italy.  But if you must try one thing, go for the fish, crusted with sesame, served with pearls of whole wheat and blanched spinach. Ah John, Ah Dory, Oh, to dine in Sicily.