Entertaining cinema but not a masterpiece to keep referring back to. Smart and cool, perhaps a bit too much so. 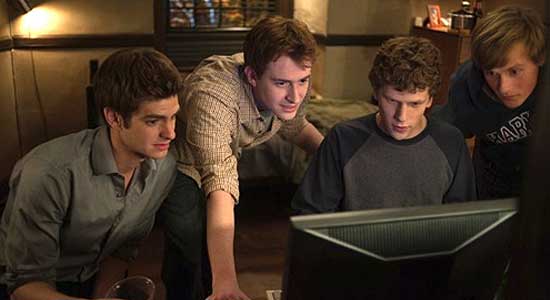 It’s easy to put up your thumb and ‘like’ The Social Network. And you needn’t be active on Facebook. The film is not about the site but how it came about, the quintessential tale of an unlikely hero, Mark Zuckerberg, who conquers the world with that one big idea. It’s bound to strike a chord because the majority today does crave success; some at all cost and most would give anything to be in Zuckerberg’s shoes. TSN scores well in laying bare the many shades of grey in Zuckerberg’s climb up the ladder. Played by Eisenberg (nicely evil yet strangely vulnerable), Zuckerberg comes across as a fascinating nerd-vengeful, vicious, compromised, immoral, stealing the big idea from the Winklevoss twins, even betraying friend and partner Eduardo Saverin in aligning with Napster founder Sean Parker. While the film is on the ball in capturing the character and what he represents, it goes overboard with its language and attitude. Every character, be it a student or a lawyer, is cool and delivers witticisms at the drop of his hat; every line is clever. It may be amusing to start with but soon begins to irritate. TSN is entertaining cinema but not a masterpiece to keep referring back to. Smart and cool, perhaps a bit too much so.