The Snake Bites In Eden

Did the Pakistan coach have an inside take on the loss to Ireland that may have worried the match-fixing mafia? 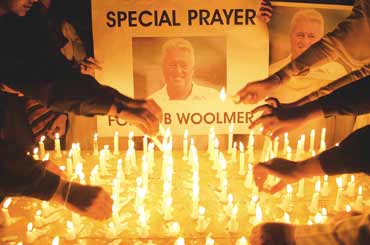 outlookindia.com
-0001-11-30T00:00:00+0553
The day after a shock is always a tough one. But he has seen worse and knows that the band of men in his charge are a mercurial bunch. He wakes up on Sunday morning in Room No. 375 on the 12th floor of the plush Jamaica Pegasus hotel in Kingston. He has finished sending in his resignation over e-mail, not wanting the stress of the job anymore. He has a towel wrapped around his waist when he opens the door to let a person/persons in. And sometime later, perhaps after a heated conversation, he is gasping for breath as he is strangulated until his life ebbs away...

One can only reconstruct the events that led to the death of Bob Woolmer. But the murder of the Pakistani team coach a day after it lost a shocker to Ireland at the ICC World Cup 2007 has revived the worst of fears—that the rot in cricket is alive and kicking. Woolmer was a high-profile victim of the

malaise that has been threatening the game for years now and refuses to go away, given the international cricket community's weak and half-hearted efforts to eradicate it.

Indian coach Greg Chappell told Outlook that the International Cricket Council (ICC) and the Pakistan Cricket Board (PCB) should be ashamed for having let things come to such a pass. "Cricket will never be the same for me," he said from Port of Spain, the night before India were to play Sri Lanka. Only recently had the Nagpur police delivered ICC a warning by revealing the links West Indies player Marlon Samuel had with bookmaker Mukesh Kochchar. But it went unheeded.

Woolmer's death is increasingly being linked to corruption in cricket. "He must have discovered something startling about the previous night's game," said a top Indian police official, who has tracked corruption in cricket in the subcontinent. "It couldn't have been something general...he may have stumbled upon something really huge." The ICC has decided to have its own investigation to see if indeed match-fixing played any part in Woolmer's death. Interpol has got in touch with Delhi police to know details of Woolmer's meeting with Police Commissioner K.K. Paul in April 2005.

It has emerged that Woolmer sent PCB chairman Naseem Ashraf an e-mail on Sunday morning, tendering his resignation. "I'd like to praise my association with the Pakistan team but now I would like to announce my retirement after the World Cup to live the rest of my life in Cape Town." Curiously, Ashraf did not access this e-mail until Thursday evening. Ashraf's predecessor, Shahryar Khan, may now be ruing that he sat over Woolmer's recommendations to eliminate match-fixing. Woolmer had suggested a zero-tolerance approach to match-fixing, urging the PCB to stop players from associating with bookmakers and people convicted of related offences. The coach had also recommended that the Pakistan players be asked to submit a list of assets at the start of their careers, so that they could be monitored.

Jamaican police, which interviewed captain Inzamam-ul-Haq, Shahid Afridi and bowling coach Mushtaq Ahmed extensively, is not willing to be drawn into a lengthy discussion on whether Woolmer's murder was an inside job committed by person(s) he knew. "It's imperative that we keep an open mind," Deputy Commissioner of Police Mark Shields says, "but I have to say at this stage it looks as if it may be somebody somehow linked to him because clearly he let somebody into his hotel room." Woolmer's body was, of course, found with a towel wrapped around his waist. It's highly unlikely he had gone down to the lobby to fetch his guest(s). And it is not the easiest of things to access team floors at the Pegasus Hotel on 81, Knutsford Boulevard. On checking in, residents are given swipe cards for electronic keys that open not only their rooms but also let them onto the specific floor. Non-residents have to perforce wait in the lobby to be taken up the elevators.

So, could it have been something that Woolmer was writing?

Reports in Pakistan quoted an anonymous ex-PCB official as saying that the book Woolmer had just finished writing, Discovering Cricket, could have exposed the cricketer-bookie nexus in South Africa and Pakistan. He claimed Woolmer met commissioner Paul during Pakistan's tour of India in 2005 to gather material. "I'm unaware if he was researching a book when he met me," Paul told Outlook. "He came because he wanted to hear first-hand the extent of the (involvement of) South African players in match-fixing...he came because he was concerned about his own perception of players like Hansie Cronje and other South Africans." But Woolmer's co-author and sports scientist Tim Noakes debunked the notion that the book had something to do with his death. "The only secret Bob was revealing in the book was how to coach cricketers."

Surely, that all but eliminates the theory that this book would have anything to do with Woolmer's death. Was he working on any other book, perhaps a revised autobiography? Over the past couple of years, Woolmer had reportedly told journalists different things. If he told some he was writing an expose on a TV scam that involved embezzlement, he told others he'd write on subjects like his relationship with Cronje.

Former Pakistan fast bowler Sarfraz Nawaz believes some top players in the team were involved in match-fixing, leading to the team's defeat in matches against the West Indies and Ireland. He claimed PCB insiders had told him that at least five leading Pakistani bookies had reached the Windies early March and were in touch with heavyweights in the team. Few may take Nawaz seriously but he isn't the only one who is saying that a certain Khwaja Arif Pappu from Lahore was the most prominent of the bookies who had reached the West Indies. Pappu is known as the don of gambling in Pakistan, having links with Dawood Ibrahim and Tariq Aziz, said to be close to Pervez Musharraf.

Cricket, meanwhile, has lurched into another crisis. Before long, the ICC will come under the kind of pressure it has never faced before. It will have to invest in greater security for players and support staff if cricket is to emerge as a credible sport one more time. With blood on their hands, cricket officials will have to act soon to ensure the game remains just that.

By Vimal Kumar In Kingston And Amir Mir In Lahore with Bhavna Vij-Aurora and G. Rajaraman in Delhi