It was a dramatic build-up: Advani as spoiler, media 'plants' and an overriding veto 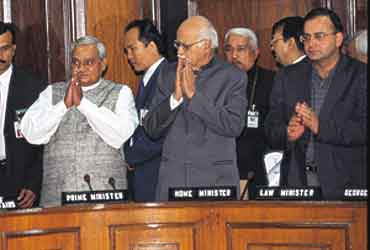 outlookindia.com
-0001-11-30T00:00:00+0553
In cricketing parlance, it can be said that deputy prime minister L.K. Advani tried to bowl a googly, which PM Atal Behari Vajpayee eventually pulled for a six. The shenanigans over the Indian cricket team’s tour of Pakistan has clearly exposed the old home ministry/ PMO faultlines. It was, in a manner of speaking, just not cricket.

More than anything else, the entire episode highlighted the deep reservations within a section of the government and the ruling BJP over the peace process with Pakistan. Once again the PM had to step in and exercise his veto to ensure the tour—now an intrinsic part of the fragile peace initiative—took place as scheduled.

The manner in which the campaign to call off the tour was orchestrated is in itself a story. Motivated leaks appeared in a section of the press about the home ministry "advising" the BCCI to put it off. The players’ genuine security concerns were exaggerated with journalists considered part of the home minister’s inner circle giving the stories new spin.

Indeed, the media itself became part of the story in the entire episode. While one leading national daily carried "authoritative" stories on how the tour was "hanging by a slender thread", a rival chain jumped in to run a campaign in favour of the tour. The editor even took a personal swipe at the scribes whom he described as "house-trained journos".

Meanwhile, a string of reasons was trotted out for cancelling the tour. It was argued that top BJP leaders were worried that in case the Indians were put through the wringer by the Pakistani fast bowlers, the carefully nurtured ‘feelgood’ mood would evaporate—and just before the general polls. The argument was absurd to say the least. "If we stretch this logic, then we are implying the BJP will be rooting for India while the Congress will be rooting for Pakistan," joked BJP spokesman Arun Jaitley. This was in fact one of the instances when Jaitley did not support the Advani line. As a BCCI member, he remains a supporter of the Indo-Pak cricket series.

Pramod Mahajan, on the other hand, reveals he had genuine doubts and had telephoned BCCI president Jagmohan Dalmiya to ask if it was feasible to call off the series on security grounds. But Mahajan too rubbishes the idea that defeat on the pitch could be detrimental to the BJP’s electoral prospects.

Why then did Advani act as spoiler? Certainly, security is a factor as the smallest incident involving the Indian team could trigger a chain reaction in both countries. But more than anything else, the dpm, a traditional hardliner, seems unable to outgrow the deep animosity towards anything to do with Pakistan—a gut reaction of the larger party and parivar too.

Days after the tour was given the go-ahead, Advani did try to distance himself from the controversy: "I’m surprised as to how the home ministry has come into the picture and why," he said. But even if one were to ignore the press ‘reports’, one can hardly overlook MoS Swami Chinmayanand’s waxing eloquent on how the tour must be called off due to the new nuclear controversy adding to the security threat.

The PM, as usual, kept his own counsel through all this. PMO officials were in constant touch with the three-member team in Pakistan to check security arrangements. Even before the team returned, the decision was made. The tour was on.

This is after all not just a cricket series. The entire peace process hangs in the balance. There is international pressure to continue down that path. Big business houses too have a vested interest in peace, opening of the borders and laying of gas pipelines. There is far too much at stake to be held ransom to an intangible "feelgood" factor and a dubious argument about electoral prospects. It seems the PM never lost sight of the big picture.

To Tour Or Not To Tour