Home  »  Magazine  »   » Making A Difference  » making a difference »  The Sins Of Somnath, Reversed

The Sins Of Somnath, Reversed 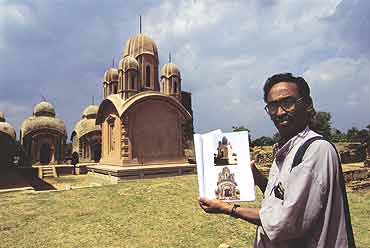 outlookindia.com
-0001-11-30T00:00:00+0553
Arich slice of Bengal’s heritage would have been lost forever had it not been for a village high school peon in West Midnapore district, nearly 200 km west of Calcutta. For Mohammed Yeasin Pathan, saving the 34-odd ancient Hindu temples at Pathra, a village 2 km away from his native Hatiholka, has been a lifelong passion. He has not only restored many of these temples to their former glory, but has also forged a concrete bond between the Hindus and Muslims of the poverty-ridden, backward area. "As a child, I used to visit Pathra very often and was mystified by the temples and the remains of the zamindar’s mansion. As I grew up, I realised that the structures were a part of our heritage and needed to be preserved. They were in bad shape. More than a century of neglect had taken its toll. The Kansabati river had swallowed a few temples and the remaining were being plundered for bricks by the locals," recalls the 52-year-old Pathan.

Pathan was 17 when he embarked on his ‘save the temples’ mission in 1971. Being a Muslim, he was greeted with sceptics and opponents within his own community as well as the Hindus. "My fellow Muslims said I had no business fighting for structures where idols were worshipped. It was un-Islamic, they said. As for the Hindus of Pathra, they didn’t want anyone, least of all a Muslim, to stop them from stealing bricks from the temples to build their own homes. The surviving descendants of the zamindars who had built the temples were themselves destroying the structures," says Pathan. He started speaking to locals, making them aware of the importance of the temples and saving them. He held out the hope that restoration would earn Pathra a place on the state’s tourist map, and to pucca roads, power and water supply and other amenities.

Reluctant at first, the locals started supporting him gradually. Pathan got them to clear the wild growth in and around the temples and began preliminary restoration work. "We staged rallies, demonstrations at Midnapore (the district headquarters) urging authorities to sanction funds for restoration. We got eminent people to visit Pathra. Money started flowing in in a trickle. The police also started helping us to stop temple destruction," he says.

In 1990, Pathan formed an NGO, the Pathra Archaeological Preservation Committee, with both Muslims and Hindus of the area. The committee provided a forum for close interaction between people of the two communities and laid the foundation for friendship and understanding. Pathan started going to Delhi and met many officials, including those from the Archaeological Survey of India. There he pleaded for funds and the ASI’s involvement. A major achievement was the sanction of Rs 20 lakh in 1998 by the then Planning Commission deputy chairperson, Pranab Mukherjee.

Ultimately, Pathan’s untiring efforts paid off, with the ASI taking over the restoration work in September 2003. Of the 34 temples dedicated to Shiva and various incarnations of Parvati, 20 have been fully restored. The ASI is now in the process of taking over 9.3 acres of land around the temples. "This area will be developed as a tourist spot with all amenities," says Pathan. True to his promise, Pathra has also got a pucca road, power, a telephone exchange and other facilities.

Now Pathan hopes that the steady trickle of visitors to Pathra will become a heavy flow in the days to come. His efforts, however, have left Pathan himself a financial wreck. Having spent a major part of his earnings in countless trips to Calcutta and Delhi, in organising rallies, printing leaflets and even a hardbound book (on Pathra), he now says, "I’m debt-ridden. I have to support my own family as well as that of my unemployed brother. I feel helpless."

Down yes, but not yet out. Pathan keeps a hawk’s eye on the ASI’s restoration. What’s more, he has now resolved to push the state government into developing the area as a tourist spot. To contact Pathan, call 9932785126. Or e-mail to: ajharul_pathan@yahoo.co.in and badsha_pathan@yahoo.co.in