Had Islamabad been smart, it would have accepted Delhi's offer unconditionally 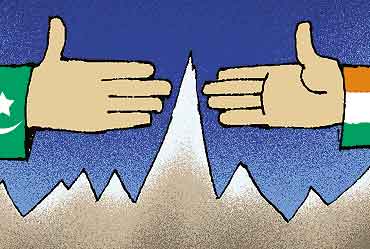 outlookindia.com
-0001-11-30T00:00:00+05:53
Pakistan took almost a week to respond to New Delhi's 12-point proposal for restarting the movement towards a dialogue on 'all outstanding issues'. But on balance, its response has been satisfactory. As one had expected, Pakistan has wholeheartedly accepted the 'softer' proposals contained in the Indian offer of last week. These are the resumption of sporting ties, the opening of visa camps in several cities, the grant of permission to people over 65 to cross the Wagah border on foot, and the establishment of links between the two countries' coast guards. The resumption of sporting ties will be welcomed by all. Visa camps and crossing the border on foot will provide inestimable relief to the people in each country with ties of blood or marriage in the other. The former will make obtaining visas easier and less expensive—today applicants have to come all the way to Delhi or Islamabad to file their papers. Allowing the elderly to cross the border on foot will mean that Indians will be able to go to Amritsar by train and Wagah by taxi, instead of sitting 16 hours in a bus from Delhi. Pakistanis will be similarly benefited.

Once the mode of interaction has been worked out, links between the coast guards will allow each country to push the other's fishermen out of its territorial waters instead of arresting them and making them languish in jail for years at a stretch—a particularly inhuman way of venting nationalistic spleen that both countries have been indulging in for years.

Pakistan has been positive on all but one of the other issues India raised. It has agreed to restore air and rail links, but rejected India's proposal to link the two sets of talks—a proposal whose rationale was never very clear. One can only hope that it will not insist upon humiliating guarantees from India never to stop overflights again under any circumstances. It has turned down the Indian proposal to increase the number of buses on the Lahore-Delhi run, but suggested a service from Amritsar to Lahore instead. This too would be a net gain because it would make the trip—train to and from Amritsar and bus across the border—far quicker and more comfortable. Its proposal to restore both high commissions to full strength to service the visa camps, among other things, is also unexceptionable.

However, Pakistan's counter-proposals on the Srinagar-Muzaffarabad road link for Kashmiris show just how far the two counties will have to travel once the preliminaries are out of the way. New Delhi sent up a kite without too much expectation that Pakistan would try to capture it. Pakistan has responded by sending up three kites of its own. Had Pakistan accepted New Delhi's offer without conditions, it would have thrown India's entire Kashmir policy out of gear. To begin with, it would have had to frame criteria and decide upon the documents that Kashmiris would need to cross the LoC. Today this is taboo number one in its Kashmir policy. Second, it would be left with no easily plausible way of denying exit permits and travel documents to the Hurriyat to go to PoK. That is taboo number two today.

Had Islamabad been smart, it would have accepted New Delhi's offer unconditionally and let it tie itself up in knots. But it laid down conditions, instead, that it knows New Delhi cannot accept. Bringing the UN back into the Kashmir dispute and acknowledging that Kashmir is a disputed area would amount to internationalising the dispute all over again. Since, in a sense, the dispute did become 'international' once India and Pakistan both unsheathed their nuclear weapons, one may ask what is new about this.

The answer is that it would amount to India agreeing to abandon the Simla Agreement. That agreement bound both nations to resolve the issue bilaterally and, tacitly, to taking the LoC as the starting point of a final settlement.For good measure, it never once used the word 'dispute'. In public at least, Gen Musharraf has never once admitted that he considers himself to be bound by the Simla Agreement. In his press conference last Wednesday, his foreign secretary Riaz Khokar tacitly reiterated this position.

There are countless reasons, both legal and political, why India will find it extremely difficult to talk to Pakistan about Kashmir outside the framework created by the Simla Agreement. But several hurdles have to be crossed before we even get to them. The most important is New Delhi's insistence that Pakistan stop 'cross-border terrorism' first. In recent months it has shown some flexibility on this issue. Indeed, New Delhi's 12-point proposal is a clear sign that it is willing to put this issue at least partly on the backburner and proceed despite the increase in terrorism since the end of August.

The onset of winter gives Islamabad an opportunity to halt the cross-border infiltration and the resulting violence without any domestic loss of face. On its part, when official-level talks begin, New Delhi can, out of deference to Islamabad's wishes and compulsions, refrain from referring to the Simla agreement explicitly.

But the talks will become meaningful only if both countries tacitly acknowledge the parameters within which they can be held.

'They Are Politicising Purely Humanitarian Gestures'