The Shocked & The Aussome

For Ponting, it was a defining moment. A 140 in a World Cup match is always special, the final makes it more so. 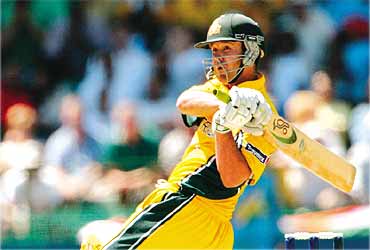 The debate on whether Saurav Ganguly did the right thing putting the Aussies in to bat will go on for months in India. I will back the Indian captain on this one. There had been overnight rain and there was sideways movement for the bowlers. Unfortunately, the seamers who had served so well right through were wanting on the day. The occasion got to Zaheer Khan and Ashish Nehra, but I was disappointed to see an old warhorse like Javagal Srinath also lose nerve. The Indians bowled on both sides of the wicket, dished out no-balls and wides regularly. The first over, in which Zaheer went for 15, set the tone for the Australian innings. Even at the death, the bowlers struggled to get in a decent yorker, bowled far too many boundary balls and full tosses.

Having said that, I don't take anything away from the Aussie batsmen. The 100-run partnership between the openers was almost predictable since they had not fired too often in the tournament. Adam Gilchrist was brilliant, seeing his team through a period when there was some assistance for the bowlers. He batted aggressively, laid a superb platform for Ricky Ponting and Damien Martyn to build upon. Damien was playing with a broken finger, but took the initiative early on. For Ponting, it was a defining moment. A 140 in a Cup match is special, the final makes it more so.