It's been a seesaw. But the arrest of a close Veerappan associate brings some firm hope. 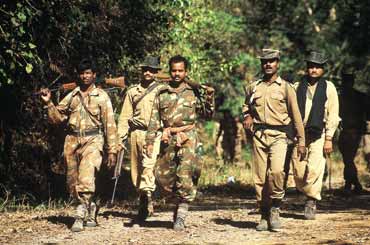 outlookindia.com
-0001-11-30T00:00:00+05:53
On February 10, the Tamil Nadu police organised a meeting at Coimbatore with tribals who inhabit Veerappan territory. Additional director general of police (operations) A.X. Alexander broke down while exhorting them to cooperate with the stf. Immediately, the crowd's mood changed with the tribals coming forward to promise their assistance in bringing the elusive brigand to book. Alexander's public weeping is a metaphor of the stf's current disposition. In Karnataka and Tamil Nadu, confidence and despair are two opposite ends between which the administration and the police oscillate when it comes to the vexatious issue of tracking down Veerappan and his gang.

The near miss in the jungles of Walayar-Coimbatore range on February 1, for instance, had plunged the stf into the pits of depression. However, the seesaw of spirits has soared once again with the stf apprehending Tamil National Liberation Army (tnla) leader Maran—a Veerappan associate responsible for Rajkumar's abduction—on February 15. Tamil Nadu dgp R. Rajagopalan is ecstatic: "The arrest of Maran was the luck we were waiting for. He has already started spilling the beans." But not everybody shares his enthusiasm publicly.

Maran's arrest should, however, enable the cautious lot to drop their guard somewhat. And it's not merely because the ongoing operation has managed to justify itself by making its first arrest. Maran, after all, is not just another member of the Veerappan gang. Besides, being a high-profile member of the outlawed tnla, he is one of those reportedly responsible for having politically initiated the poacher to the ways of Tamil nationalism and given his band a supposedly new ideological raison d'etre to kill, loot and raid. But it remains to be seen how far the stf can go in cracking Maran.

This scepticism stems from the fact that whenever the cops have come close to arresting the brigand, he has managed to give them a slip. For instance, a fortnight ago, a local grocer tipped off the stf sleuths about Veerappan's presence in Walayar. The former had been surprised by a poor tribal, Ayyappan, procuring huge quantities of supplies from him. He alerted the police. When the tribal set off with his next lot of food supplies, the stf sleuths followed him. But Veerappan, catching the glint of a barrel slung across a shoulder, vanished in a cloud of grenade smoke.

This has, once again, resulted in the usual barrage of allegations and counter-allegations. Asks an stf official from Karnataka: "Why did the Tamil Nadu component of the stf not share its information about Veerappan's presence in Walayar with the rest of us?" The feeling is that Veerappan, once located, should have been taken by surprise by a larger force with adequate firepower than the one deployed. Karnataka cops, who are part of the stf, feel that Tamil Nadu botched up the operation and gave the brigand a fresh lease of life. A charge strongly denied by senior stf officials.

IN fact, it's this basic lack of trust and cohesion and a feeling of hostile competition within the stf which may undo the advantage it might derive in tracking down Veerappan, provided Maran sings. What remains to be seen is whether the tnla man's arrest can resolve these differences.

Circumspection, therefore, is natural. Says Karnataka home minister Mallikarjun Kharge: "We don't want to set deadlines because the ones fixed by the previous governments could not be met.We have entrusted the job to the joint stf and assured them of all help. It's up to them to adopt any strategy, be it aerial survey or using satellite images, they have a free hand. But if any inadequacies are brought to our notice, we will iron them out." Sophisticated technology and the use of helicopters has, however, not quite helped. In fact, the thing that the stf can complain the least about is inadequate technological assistance.

Meanwhile, there have been allegations that the ruling dmk's political compulsions in Tamil Nadu—with assembly elections in April—have impeded the operations against the obdurate bandit. dmk leaders, however, point out that nabbing Veerappan would actually help during the polls since a sizeable population wants his arrest.

In fact, stf officials aver that the present operation is quantitatively different from earlier joint operations. The total strength of the force deployed has been increased to nearly 3,500. The Karnataka government has positioned 1,000 of its state reserve police (ksrp) men at MM Hills and adjoining territory where Veerappan has struck in the past. This massive force matches that deployed by Tamil Nadu along its border with Karnataka and Kerala. The stf has also been trying to woo the local tribals. A Rs 20-lakh reward has been announced for providing information that would lead to the brigand. But now Maran's arrest could make the task a lot less complicated.

Says one of the operations officer: "Though searching for Veerappan in the jungle is like the proverbial search for a needle in a haystack, by carefully segmenting the jungle into various little zones, we are confident of getting him in a reasonable time." And with Maran in their custody, this routine spiel actually sounds much more than that. Though it's far from the shrillness of their 'Veerappan-will-be-nabbed-in-a-few-days' refrain.

But the confidence boost that the tnla man's arrest has brought to the units on the ground pales before the total befuddlement of the bsf commandos combing the jungles, together with units from Kerala, Karnataka and Tamil Nadu. It's symptomatic of chasing a phantom. "None of us has seen Veerappan," says an stf squad member. "Nobody is sure if he's in this area at all."